Family legend contends that Mimi was my baby doll when I was little. I assume this is indeed true as I have a vague recollection of lopping off all her hair. Family legend also contends that my mom gave her to me because her name was my first name (not Mimi, that is what Seg calls her). I have looked high and low, all over eBay and elsewhere and find no evidence of this whatsoever. Of course, this story came from my mother, who also told me she named me Babel instead of Jennifer because I was born the same year that the movie "Love Story" came out and every baby girl born then was named Jennifer, that I was the only baby girl in the entire maternity ward NOT named Jennifer. This is a terrific story, especially as I invariably had at least three Jennifers in every single class in grade school. The only problem with it is that I was born in April and "Love Story" came out in December. So a story is all it is. And I suspect that is also the case with Mimi’s provenance.

Nevertheless, I had hung onto her all these years, along with my Cabbage Patch doll, the two Fisher-Price "My Friends" dolls, and most of my Madame Alexander dolls. When we moved almost three years ago, Seg came upon Mimi in the unpacking and claimed her and never looked back. He adores her, and thinks she is the prettiest thing alive, although “hair for Mimi” did make it onto his original Christmas list this year.
I’ve told him that Santa is magic but he’s not a miracle worker.

Seg has since adopted a cloth-bodied/plastic limbed baby doll I bought for a quarter for him at the neighborhood yard sale two years ago. He promptly dubbed her Lucy (since shortened to Luce) and stripped off all of her clothes.

Then he discovered the bag of Madame Alexander dolls in various states of disrepair, that I never got around to transporting to the doll hospital for use as parts (I am heartless, I know.) He fell in love with the strawberries-and-cream-complexioned Beth, from the "Little Women" series. 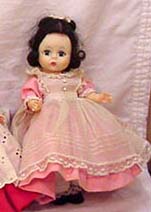 Her black velvet Mary Janes, little white socks, lace-edged knickers, beaded white lawn pinafore, and frothy petticoats are long gone, but she does retain her pretty pink dress. He has named her after me. (Finally! Three grandchildren before I get a namesake!) I was never allowed to even touch my Madame Alexander dolls (my mother was the misguided soul who undressed them all, washed all their clothes, and then never put them back together), let alone play with them.
It gives me great pleasure to watch Seg tote the delicate little Beth, er, Babel, around the house by the neck, cradled in his arms next to her sisters Mimi and Luce.

I have thought of finding a nice sibling for them; what do you think of one of these scary girls? (They are all from the same toy manufacturer from which Mimi originated, according to the stamp on the back of her neck (right next to the “I Love Seg” tattoo I recently gave her.))

This is the baby version. 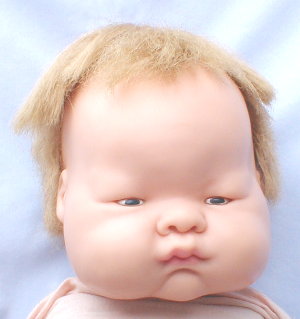 The others all seem to be blond. 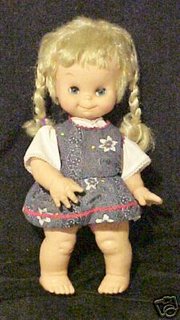 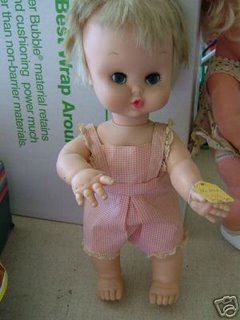 They all have the same dimpled hands and Hobbit feet, and chubby limbs.
And these happen to have hair, which improves their looks immensely.

But Seg doesn't care. He loves him some Mimi.


and my mom has a bullshit story for my name too.

I hear you on the bullshit name stories. My brothers both did much worse in the naming game than I did and their back stories are much, much worse.

I do feel a little for your mother, though. Before there was Google, and IMDB, there was an excellent chance she'd have got away with the dates issue for A Love Story forever...

Dolls. Freak me out. Especially ones who have eyes that open and shut. They are all possessed.

I like Mimi a lot, but that babydoll picture is really freaky looking.

I had a doll that looked a bit like Mimi...wait...does that mean your real name is Baby Party?

Mimi is sweet but those last three are creepy.

that is just about the sweetest thing i have ever heard.

So we share a name as well as a profession. ;)


"I’ve told him that Santa is magic but he’s not a miracle worker."

Don't tell Seg what eventually happens to Beth and her bird, Pip.