He's making a list and checking it twice, gonna find out who's naughty and nice...

My boys gave me their Christmas lists for Santa Claus this week. And here I thought I was done shopping – because Santa may be magic, but Mama, not so much. Sadly, disappointingly mortal and UNmagic. Which means that I tried to get the shopping done while I had some free time earlier this month, and considering the stomach thing that laid me out yesterday, my last free day pre-Christmas without the boys, it’s a damn good thing.
So I was pretty pleased with myself – they’ll have books a’plenty, and Spiderman umbrellas, and some crafty sorts of things – crayons, make-your-own-kaleidoscope kits, PlayDoh; and some necessary clothes like t-shirts and socks and underwear. I got Seg his longed-for Cars backpack. Yes, I suppose we’re a leetle heavy on the books and Lightning McQueen front, but it’s ok.

So then they hand me their lists.
And I am charged with stamping them and sending them off. Which I duly did.
But not before I read them. And scanned them so you could read them.
(Landing me solidly on Santa's 'Naughty' list.) 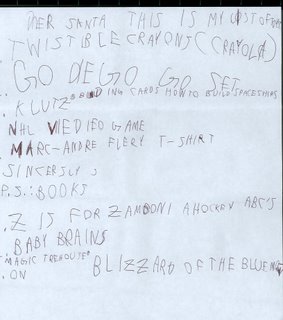 Primo: (I rendered the capitalization legible but left his spelling, and indeed followed his sense of fair use by inserting trademark symbols where he did.)


- The video game - NOT going to happen – sometimes I let them play computer games on the PBS website or Nick Jr website, but no way am I doing the video game thing, not yet at least. In fact, a coworker offered me his sons’ GameCube (they are 3 & 8) because he bought them a Wii. It went to a good home with Gina’s son instead, who in my opinion is indeed old enough to play video games occasionally.
- A Penguins t-shirt – he got a Sidney Crosby shirt AND a Pens jersey for his birthday from various relatives; I think he is outfitted well enough in Penguins paraphernalia.
- The “Go Diego Go” playset: the Amazon reviews were uniformly lousy, and I think it’s too young for him. I may compensate with some Rescue Heroes figures. Or not. Probably not. I will feel rotten about this all year long.
- The Klutz Build-Your-Own-Spaceship book. I bought him the pirate ship book at the Scholastic book fair and he had a blast putting the ship together, with his dad and Seg. You can take it all apart and put it together again, either the same way or in a variety of other formations. I had already picked up the spaceship book while shopping for his cousins, so that’s covered.
- Crayons – I automatically buy them new crayons every year, and we LOVE Twistables in this house because they are more difficult for The Baby to eat and they don’t break when Mama steps on them in the middle of the night, or anytime, for that matter. 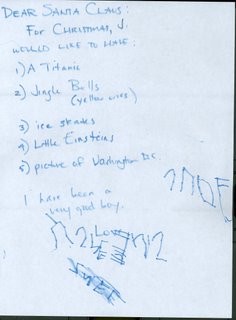 Segundo: (He dictated this to me. I wrote it down just as he asked. It cracks me up the way he refers to himself in the third person.)
Dear Santa Claus: For Christmas Seg would like to have:
1. A Titanic
2. Jingle bells (yellow ones)
3. ice skates
4. Little Einsteins video
5. picture of Washington DC
I have been a very good boy.
Love, Seg Babe

- The Titanic, to complement his little plastic yellow submarine and his sailboat, both of which get tons of use in and out of the bathtub. He told me he has another little ship that will do for the Carpathia, but the Titanic must have four smokestacks. I am having a dickens of a time finding any kind of ship other than pirate ships for him. I did track down a very cool sink-your-own-Titanic type kit, but it’s too old for him just yet. I think on my lunch hour Tuesday I am going to the old-fashioned toy store downtown to see what they have. I had better stock up because I have a feeling he is going to request the Lusitania next.
- Jingle bells, like in The Polar Express, only “yellow.” I take it this means gold. Not a problem, a quick visit to the craft store should do the trick. But could he BE any cuter?
- Ice skates. Skates were something H and I were contemplating anyway, but they just moved to must-haves. I called a Play It Again Sports store up north, and they have two pairs, used, that will work just fine, for fifteen bucks a piece. Perfect, I’ll go pick them up tomorrow before work. [Got 'em. Tried to get skates for H as well, but they did not have his size, used.]
- Video. I don’t mind the Little Einsteins in the least but I am sort of opposed to buying videos. We already have a ton accumulated in a variety of ways. It really depends though on whether or not the grocery store has any in their displays near the video rental part of the store.
- Picture of Washington DC. “Like that picture, Mama” and he points to the framed Carnivale poster from our honeymoon in Venice, complete with masked revelers and Saint Mark’s recognizable profile against an unnaturally vibrant sunset. Seg likes pictures of things – he often asks me to cut out photos from the newspaper of things like buses, hockey players he likes, or certain animals like the new polar bears at the zoo, and then we tape them up on his bedroom wall. The boys have Washington DC placemats H brought back for them from a business trip. So maybe he just likes the way the city looks. I’ll do what I can. Thank God for the Internet!

Terzo is too young to give me a list, thank God, so I just got him what I felt like getting him – a couple Thomas trains of his own, and the Fisher Price Noah’s Ark, and some cute t-shirts, and some new sippy cups, and a couple of warm, fuzzy sleepers because he looks so CHEWY in footie pajamas.

I feel on one hand like I am spoiling them rotten, but on the other hand that I adhered to an agreed-upon set budget and because they are still little, that (very reasonable amount of) money goes farther.

I do think next year that I will restrain myself on the book buying a bit (in my defense, most of them were purchased secondhand at Goodwill, the library, or this summer’s church book sale), and maybe wait till closer to Christmas to do the actual shopping, so as to avoid this excess-of-presents question and/or guilt.

The truth of it is that my boys don’t NEED anything. They have toys and clothes and school supplies and plenty of hand-me-down videos and DVDs and games. They have sports equipment and bikes and stuffed animals and winter coats and shoes. Just because I have not been the one who has bought these items, or even paid full-price for the ones I have, does not assuage my guilt that I am somehow screwing up and raising spoiled, whiny brats who expect everything to be given to them. Which is not the case at all; my boys are usually gracious and generous, and they share well, and they understand that they are very lucky – but I live in terror that they could wake up tomorrow as entitled monsters.

They've been very good boys.
I should stop feeling guilty.

If you would like me to send you a postcard from Washington, D.C. here, just let me know.

I think ssheers should send postcards and sign them from Santa. But that's just me. Anywho - this is the first year in forever that my little man and I will be at our home together on Christmas and so I have gone WAY overboard on the gifts trying to recreate that "Christmas morning" feeling I remember as a child. He will be over the moon, I will be paying for it for a month, but nontheless, I'm looking forward to the day as much as he is!

How do I love you for scanning the boys' letters to Santa? Hand to God, I teared up when I read them. So cute. They *are* good boys, and they've got parents who love them beyond all reason, which makes them very lucky too.

That is just gorgeous. I've kept my daughter's Christmas list too (from which she is only getting ONE thing). I agonise over the present-giving excess too, but I think you can't ever have enough books :-)