"...for your information not all vampires can take care of themselves." - Sookie Stackhouse

Dudes, I'd write a blog post but I am too busy gobbling down Sookie Stackhouse books. Am currently on number 4, and hey, guess what? My grocery store has all of them so I bought Books 5 and 6 and just sorta, yes, I admit it, put them on my grocery bill. Along with the doughnuts and milk and carrots and diapers...it's like, sorta, my bonus. Right? Right.
Posted by BabelBabe at 9:42 PM 9 comments:

Email ThisBlogThis!Share to TwitterShare to FacebookShare to Pinterest
Labels: Dead to the World, Into the Forest, The Northern Clemency

"Well, me don't swim too tough so me don't go in the water too deep."

There is NO better litmus test for an excellent book than: Does it cause one to ignore and/or neglect one’s offspring?

I am halfway through the second novel (Living Dead in Dallas) in Charlaine Harris’ Southern Vampire series (yes, the one that HBO series “True Blood” is based on (but I have never seen it nor do I intend to because the vampires are NOT hot)). (The first book is Dead before Dark.)

Yesterday evening, after a nerve-wracking afternoon at the pool, I came home, put the baby in bed, ordered a pizza for the boys, poured myself a double rum-and-Coke, and sat on the couch reading until I finally had to put the Pokemon players to bed at 10 before my husband got home.

Sookie Stackhouse is everything Bella Swan is not: independent, strong, able to stand on her own two feet. (And did I mention NOT wildly annoying?) Also? Fully capable of denying her vampire boyfriend utter control over her and her life. If Bill Compton took a part out of Sookie’s car so she couldn’t go somewhere he deemed unsafe, I would bet, vampire or no, Bill would suffer for it.

Even better, Bill gets this. He admires it. He likes Sookie’s intelligence, self-sufficiency, and vigor. He thinks it’s HOT.

Now, seriously, I think Edward gets sort of a bad rap. It’s not HIS fault Bella’s blood smells like baco, er….his “own personal brand of heroin.” That scent could just as easily have belonged to a competent, determined, and self-sufficient young woman. I would bet Edward would rather have a Sookie Stackhouse of his own.

You know, if he couldn’t have me.

Email ThisBlogThis!Share to TwitterShare to FacebookShare to Pinterest
Labels: Into the Forest, Living Dead in Dallas, Northern Clemency

"[T]he reason they're there is so that we can reach the farther shore, it's the other side that matters."*

I have no idea why I feel like I have so much more time to read in the summer; I probably have even less, what with all four boys home all day long, and keeping them busy and entertained (not to mention clean, clothed, and fed). But I often tackle bigger books, or books I have wanted to read for a while, or go on jags of, say, mystery novels featuring the same detective, or a bunch of different novels about one particular time in history or historical figure.

However, this first novel, Jean Heglund's Into the Forest, is a one-off, recommended by a school mom friend who used to be one of my closest friends; which is to say, while she may not spend lots of time with me now, we once not only worked together but socialized a lot and so she knows me rather well, even still. Because this book is right up my alley. Set in the near-ish future, modern civilization has deteriorated to a much more primitive society; there is no longer phone service, electricity or its attendant machinery, access to and/or practice of modern medicine, or much of anything that makes the 21st century what we expect. Two sisters, living rurally with their parents, are the heroines of the novel, if heroine is a word one can use in this context. Think Cormac McCarthy’s The Road, only not quite so godawfully bleak. But close. Awfully damn close. There’s a lot more revealed about what’s happened to society in this novel, and there’s much more plot, but the feel is the same. It’s not as desolate and shattering as The Road, but it is ultimately as horrifying.

I am concurrently reading Philip Henshaw’s The Northern Clemency, [UPDATED: Hensher, NOT Henshaw; I apologize to Mr Hensher, but my criticism still stands.] which is this giant sprawling novel that meander sit sway through several families and their lives during several particular timeframes. So far, so good, but I find the proofreading errors maddening. I suppose it’s not Henshaw’s fault that his editor didn’t catch the homonym misspellings, or the mixing-up of similar character names, but it’s truly distracting, and takes away from the importance and prestige of being a Booker finalist.

I also just started Jose Saramago’s Blindness, am only about thirty pages in.

I thoroughly enjoyed Philippa Gregory’s The Other Boleyn Girl (I must see the movie now), and have several of her other novels waiting for me (on my pretty new bookshelves), probably The Boleyn Inheritance up next. I also have Emma Brown, Charlotte Bronte’s unfinished manuscript, used as the jumping off point for Clare Boylan’s own novel, sitting around, and also Elizabeth Strout’s Olive Kitteridge.

Jennifer Weiner has a new novel coming out in July, a friend just sent me The Brothers K with a note simply saying, “Read this,” I have three books winging their way (or sailing and that’s what’s taking so long?) across the Atlantic from Persephone Press (more on those later), and I think I may send to the Land of the Frozen North for the newest AS Byatt instead of patiently waiting for it to emigrate to the States.

Ok, so, this summer, who’s reading what at the beach, or in your backyard, or at the pool? Big fat novels, long-planned-on classics, or celebrity gossip mags with delicious photos of RPatz? Do tell.

Email ThisBlogThis!Share to TwitterShare to FacebookShare to Pinterest
Labels: Blindness, Into the Forest, The Northern Clemency

"A baby is God's opinion that the world should go on."*

I probably don't rave about blogs I enjoy nearly often enough. I really like Crooked House - it's funny, smart, and Stephany and I share an adoration of the printed word. Um, like, maybe, an unhealthy obsession...also, she turned me on to the beauty of paper-cut artwork. Also also, you want to check out the links on her left sidebar, under "Take a Look"...fun stuff.

But, most importantly, Stephany just had her baby (also, was she early? Because I thought I had another month....must go finish, ahem, baby gifts, furiously fast...)

Congratulations on the birth of your little girl, Stephany! (Looking forward to seeing photos, if you are so inclined.)

Congratulations to your husband and to the baby's big brother!

And Sylvie, welcome to the world, little one. You were anxiously awaited and are lovingly welcomed by a sort-of-stranger hundreds of miles away; don't let that freak you out : )

P.S. I am glad your mother did not name you Renesmee.

We love you, Penguins...
(and Sid the Kid, youngest captain to ever win the Cup, and all-around class act!) 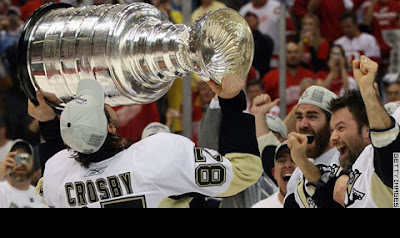 Oh, yes, we do!
(And not just cuz you're 1) freaking adorable with your little beard, your floppy hair, and your cute French accent - oh, yeah, and your awesome goalie skillz! and 2) you scored two freaking goals! Clutch, baby!) 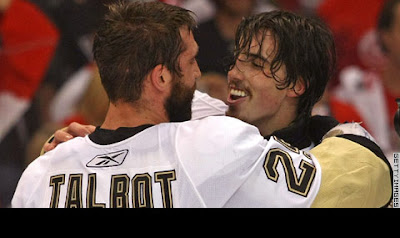 We love you, Penguins, and we'll be true!
(Unlike Marian Hossa, the big loser! Take that, jerk! From my hilarious and awesome friend Allison: "When you change lines at the grocery store because you think the other line is shorter, you always know what will happen, right? Now, that will forever be known as pulling "A Hossa.") 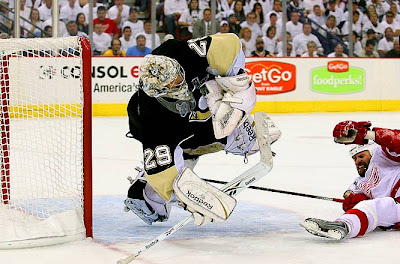 When you're not with us (but in Detroit!), we're blue (except we're not 'cause you won the Cup!) 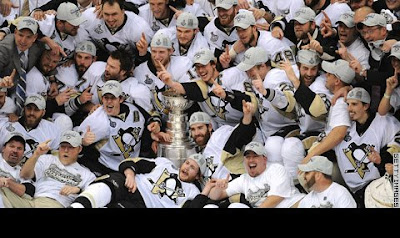 Email ThisBlogThis!Share to TwitterShare to FacebookShare to Pinterest
Labels: LETSGOPENS

“I would be the most content if my children grew up to be the kind of people who think decorating consists mostly of building enough bookshelves.” 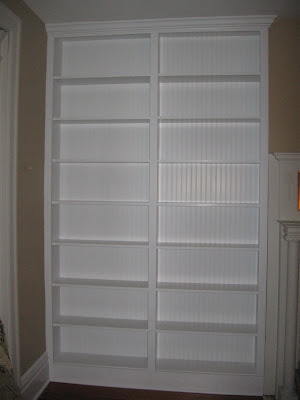 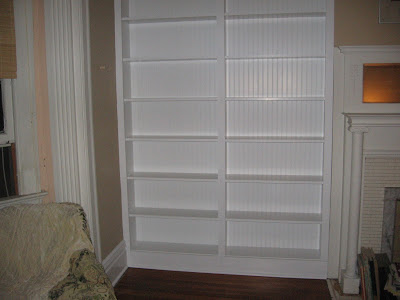 My new bookshelves are installed.
Merry Christmas to me!
Easily one of the best Christmas presents I have ever received.
As I expected, the space was perfect for bookshelves, almost as if that was what should have been there from the very start. 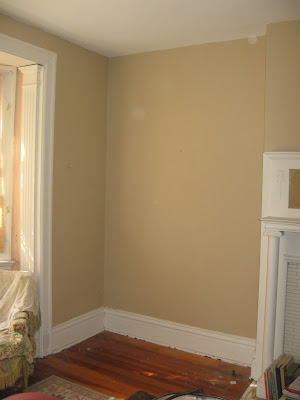 Now this can be dealt with: 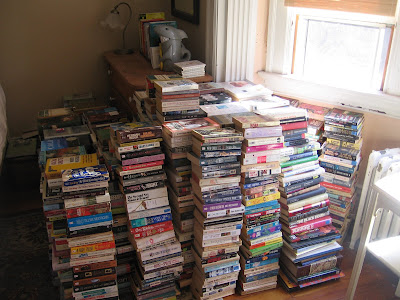 And now, the fun but difficult part begins: what books belong on these shelves, these shelves in my bedroom - that most intimate of spaces, the shelves closest to my bed and therefore my heart...I foresee some books being relegated to downstairs, even as some of my favorites from downstairs (AS Byatt, Salman Rushdie, Andrea Barrett) are transferred upstairs. 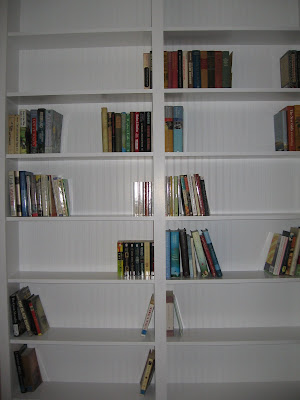