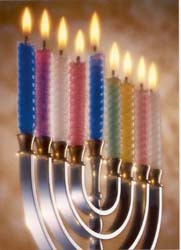 I Maccabees 4:36-59
Then said Judas and his brethren, Behold, our enemies are discomfited: let us go up to cleanse and dedicate the sanctuary.
Upon this all the host assembled themselves together, and went up into mount Sion.
And when they saw the sanctuary desolate, and the altar profaned, and the gates burned up, and shrubs growing in the courts as in a forest, or in one of the mountains, yea, and the priests' chambers pulled down;
They rent their clothes, and made great lamentation, and cast ashes upon their heads,
And fell down flat to the ground upon their faces, and blew an alarm with the trumpets, and cried toward heaven.
Then Judas appointed certain men to fight against those that were in the fortress, until he had cleansed the sanctuary.
So he chose priests of blameless conversation, such as had pleasure in the law:
Who cleansed the sanctuary, and bare out the defiled stones into an unclean place.
And when as they consulted what to do with the altar of burnt offerings, which was profaned;
They thought it best to pull it down, lest it should be a reproach to them, because the heathen had defiled it: wherefore they pulled it down,
And laid up the stones in the mountain of the temple in a convenient place, until there should come a prophet to shew what should be done with them.
Then they took whole stones according to the law, and built a new altar according to the former;
And made up the sanctuary, and the things that were within the temple, and hallowed the courts.
They made also new holy vessels, and into the temple they brought the candlestick, and the altar of burnt offerings, and of incense, and the table.
And upon the altar they burned incense, and the lamps that were upon the candlestick they lighted, that they might give light in the temple.
Furthermore they set the loaves upon the table, and spread out the veils, and finished all the works which they had begun to make.
Now on the five and twentieth day of the ninth month, which is called the month Casleu, in the hundred forty and eighth year, they rose up betimes in the morning,
And offered sacrifice according to the law upon the new altar of burnt offerings, which they had made.
Look, at what time and what day the heathen had profaned it, even in that was it dedicated with songs, and citherns, and harps, and cymbals.
Then all the people fell upon their faces, worshipping and praising the God of heaven, who had given them good success.
And so they kept the dedication of the altar eight days and offered burnt offerings with gladness, and sacrificed the sacrifice of deliverance and praise.
They decked also the forefront of the temple with crowns of gold, and with shields; and the gates and the chambers they renewed, and hanged doors upon them.
Thus was there very great gladness among the people, for that the reproach of the heathen was put away.
Moreover Judas and his brethren with the whole congregation of Israel ordained, that the days of the dedication of the altar should be kept in their season from year to year by the space of eight days, from the five and twentieth day of the month Casleu, with mirth and gladness.

Last year my friend D had me and the boys over for dinner the first night of Hanukkah, and it was wonderful. I was inordinately pleased to find out about the whole doughnuts-for-dessert tradition, and the boys received dreidls to play with, and gelt, and we all sang a variety of holiday songs. The lighting of the candles and the saying of the prayers were solemn and lovely.

I appreciate that my boys are learning about other religions and cultures, that they know that all of our friends are good, kind, generous people, and I am pleased and touched that my friends are open-hearted enough to include us.

Plus, Hanukkah gives us Gentiles a great excuse to eat latkes, which are one of the yummiest foods ever.

My friend R makes sweet potato latkes, which sound amazing. I don't have her recipe, but I offer this recipe, which is one of my favs throughout the year, but would work nicely for Hanukkah, too, I suppose (providing I haven't broken any major dietary laws?) I have been known to eat an entire batch of these for dinner. And not just when I was gestating.

Peel and grate the yam.
Beat up two eggs, add, and mix.
Add flour to make mixture cohere. (You can add more if needed.)
Add red pepper flakes to taste, and black beans. Mix.
Use a soup spoon to form little "cakes" and fry in olive oil until golden brown on both sides.

Posted by BabelBabe at 2:02 PM

Nice post! Laurie Colwin's cookbooks are favorites of mine (actually, I reread all her novels and collections from time to time)

Everything about this post reminds me of a bakery and restaurant (which I assume is defunct), The Gazebo on Walnut Street in Shadyside. I grew up in Pittsburgh and I'm still sentimental about a few special places there.

OMIGOD, I will never get the word verification right. It's something like diffydduddyquup. I think.

Thanks for posting the recipe. Sounds delicious.

I've never cooked with fermented black beans before. Are they salty? That would taste good w/ the yam. Maybe I'll just have to give this recipe a try.

How lovely of your friend to invite you to Hanukkah. I live in a very Jewish area (my children have been brought up on bagels and brisket) and here they tend to keep to themselves, they're very nice, but I can't see any of my Jewish acquaintances inviting me to something so personal.