"But let that ill-gotten donut be forever on your head!" - Ned Flanders, in "Daddy's Soul Donut," The Simpsons

OK, I thought I was going to write a post about the Wiggles, and how they’re decent musicians and decent guys, if more than a little bit annoying – especially Murray Wiggle - and Greg Wiggle having to quit due to health reasons, and King Kaufman’s mean-spirited satire on Salon (and I normally enjoy King, so totally didn’t get where this was coming from). But I find that in the twelve hours since I conjured up this post idea, I have grown bored with it.

No surprise, really, since the full moon appears to be wreaking havoc in my (usually orderly and well-oiled?) life. HA! So, this is another one of those "Oh my God, I want to go home and go to BED!" posts. Just like Seg: [photo of Seg hiding under the covers in my bed] Oh, wait. I deleted that picture because I thought I wasn't using it. See, this is how it starts. Feel free to skip to the doughnut photos at the end. (Yes! Doughnut photos! It all turns out ok in the end!)

The Baby was up screaming his head off for an hour and a half last night (paired with head-butting the crib sides and hiccupping, I’ve-forgotten-how-to-breathe sobbing), and of course H and I had the “We should let him cry/I can’t stand to let him cry” argument at 330 am. I admit he’s my favorite – he’s the Edible Baby and he can’t talk yet, both endearing qualities.

(And, speaking of The Baby, I mentioned to H that Terzo has taken to ripping my glasses off my face, and it's unpleasant, as well as detrimental to the efficacy of my glasses.
H's response? "Don't let the baby near your face."
Men: The Helpful Sex.)

I slept through my alarm (not unsurprisingly) and H got in the shower before I did and he used most of the hot water. And he blithely announced, “Well, I’m leaving now” while I was still dripping water all over the bathroom floor and the boys were clamoring for their third bowl (each) of Honey Nut Cheerios. (Of course I was stupid enough to say, “Oh, ok” instead of saying “Where the FUCK do you think you are going, I don’t give a SHIT that you have an 830 meeting, go pour some cereal and let me blow-dry my hair in peace.”)

It’s too cold to wear a skirt. My pants don’t fit. Because, did I mention, I went to the doctor last week and not only am I apparently two inches shorter than I have always thought I was, but I am twenty pounds heavier than even my most liberal estimate of my overweight-ness.

And because I slept through my alarm, I did not have time to run this morning. But it all worked out anyway because my babysitter called to say she’d be late, which meant that I was late leaving to drop Primo at school, which meant that I had to run two blocks to miss my bus. (No, I did not CATCH my bus. I missed the bus.) I can tell you, however, that the two-block sprint gave me the same endorphin high that my usual two-mile plod does, and in a fraction of the time. Good to know.

I finally caught a bus, any bus. Cleverly, I had packed up Mimi’s scarf to knit on the bus, since I can’t read. And that’s when I realized that somewhere in my house, my car, or those two blocks, was the baggie containing the yarn, the needles, and Mimi’s almost-completed knobbly scarf. The babysitter didn’t answer the phone so I still don’t know if it’s at home or lying forlornly in the gutter. And Mimi’s little neck is cold.

I have logged no fewer than four IT help requests at work this morning (I have been here for a mere two hours), all legitimate, but every single one gets this response from the IT department (which is no longer library-specific): “What is the make/model/serial number of the printer/scanner/computer?” Who CARES? You’re the IT help person, come over here and find out. I am merely the reference librarian. Oh, and the computer? Is identical to all one hundred other computers in the library. I am fairly computer savvy, but I don’t want to be an IT person. EVER. Just come fix the problem and leave me alone. Those who can, do. Those who can’t, join IT.

I wanted to renew some library books online; my library card has expired.
I wanted to link to the Salon article, but my Premium membership has expired.
I wanted a peppermint mocha; they gave me a plain mocha.
Someone asked for whiteout; all we had was “Ledger Buff.”
Six people have asked for scotch tape; we are right on out, and no one seems to believe me (because clearly I am selling purloined tape rolls on eBay!)
Blogger is fucking with my spacing.
(Ok, this one is real) Monday was - would have been - my dad's 77th birthday. He's been gone twenty years.
I finished The Book Thief last night, and it was good, but I sobbed like a baby for the last fifty pages. My eyes are swollen.

But it’s all ok. It really is. Because I made doughnuts yesterday, and their delicious, cinnamony, yeasty scent still lingers in my house, and in my hair, and on my sweater. Soothing.

“Doughnuts: good for what ails ya.” 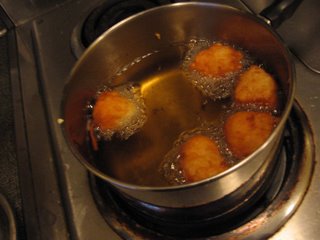 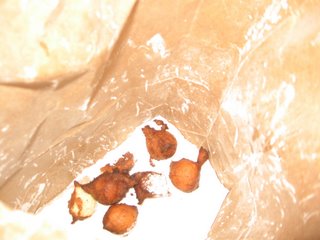 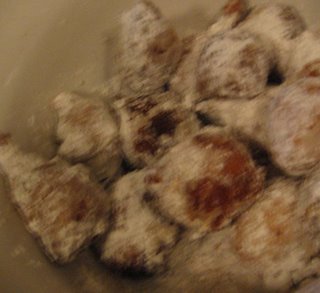 Drop by scant teaspoons into hot oil. (Dip the spoons in the hot oil before scooping up dough, it falls off much more easily then.)
Remove when golden brown and drain on paper towels.

Combine a few healthy cupfuls of powdered sugar with 1/2 tsp cinnamon in a paper bag. Drop hot dougnuts in bag, shake to cover, fish out, and eat.

Wash down with huge glasses of cold milk.

Don't let the baby get so close to your faceor remove your eyeglasses prior to rubbing noses with the wee bairn.

THEN the properly trained husband prints up an 8½" x 11" sign reminding people of the baby's hatred of eyewear.

It's all quite simple, really.

And seriously, if he is not in any danger, nor hungry, nor uncomfortable...let the baby cry.

And how come *I* never thought to keep my baby's hands away from my glasses?!?! What a novel idea!

I don't know if I could do deep frying, but Nigella's jam donut muffin-thingy's are pretty good too.
Yes, I'd like to know what men are thinking in the morning. I'm guessing not much - which is why they cannot multitask and say, put their son's shoes on while checking eBay for the 50th time. But know TO THE SECOND how late YOU are running, and helpfully call out the time every couple of minutes.
Sounds like the full moon's got it in for you. Best be in bed with a good book :-)

Hey, if you still need your card updated, call me!

and feel better and stuff. That full moon...

I want a doughnut!

I hope you can find Mimi's scarf. She needs all she can get.

I HAVE A COLD SORE.

At least you HAVE an IT dept. At my first real job, a major New York-based women's magazine with buckets of money, you could wait a hundred years for IT to show up. Apparently buckets of money does not extend to computer help or paying your editorial assistants a living wage.

Wait, donuts don't have yeast in them? Y'mean, all this time, I could have been making donuts and I didn't know???! Well, dayum.

Did you find Mimi's scarf?

Okay, I read H's advice about glasses + baby and your withering sidebar aloud to my husband and even *he* thought it was funny.