Wow. I never even got around to telling you about all the books I had borrowed from the library before becoming swept away by more Sandman and then deciding that I really did not feel like reading right now the Perrault fairy tales, or a book extolling the glories of a variety of libraries (although I would love to OWN it), or fiction that I randomly picked for no good reason that I can remember.

I did manage to buy little Uno, my brother's son, a cuddly outfit (with penguins!) and his first Thomas train (thereby rewarding my brother and his wife for all their generosity over the years by hooking their boy on the kiddie equivalent of crack cocaine). 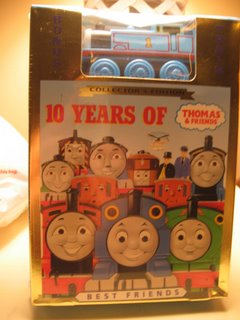 However, I am feeling guilty because, while I am generally VERY good about keeping to our budget and most of the Christmas gifts were spread out over the past six months’ bills, I spontaneously bought Terzo this: 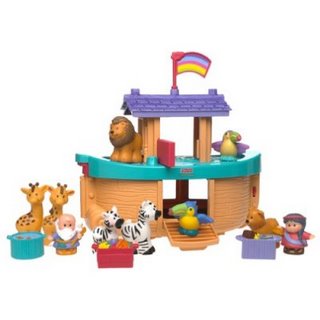 complete with auxiliary animals (it only comes with four animals! but at least they are paired...), and this because it’s about time there were some real female engines in Sodor. 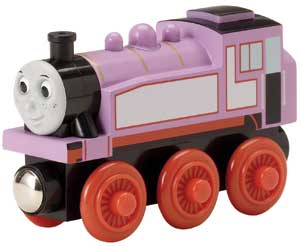 And I bought Seg dominoes because he is very spatially oriented and I think he’d really dig the game, and this very scary shirt: 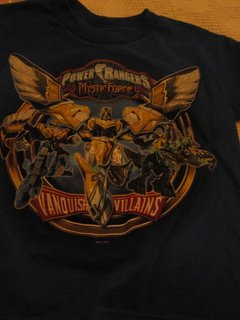 because the last time I bought him anything brand new just because he liked it was – whoops, last summer at Thomas in Strasburg – but before that, for his two-year-old picture, so he’d have a new outfit and not a repeat of Primo’s; and the Power Rangers are something Seg likes but Primo doesn’t much care about, so it’s good to encourage a little individuality. (Seg's the middle, and so was I (although I was fortunate enough to be the only girl), so I am more sympathetic to the plight of the ignored middle.)

And I MUST STOP buying Primo books. I have a huge stack over and above what he’s getting for Christmas and his birthday – most of which I have picked up, cheaply but in great shape, at the library or Goodwill used book sale, but honestly, what he SHOULD be receiving for Christmas is a new bookCASE.…

Oh, and at Target, they had these great cotton long-sleeved t-shirts that did not make me look six months pregnant, so I bought three. Blue, grey, and black. (It puts me in mind of a previous co-worker whom our office secretary accused of deliberately dressing “like a bruise.”)

And a really soft, kinda skinny, moss-green scarf. Because, as we all know – or if you don’t you have not been paying attention – I have a scarf THING. And it was on sale.

And now, once a bottle of this yummy stuff is purchased, the boys have “shopped” for me and H doesn’t have to worry about it.

Primo’s birthday is in two weeks. I generally don’t start Christmas prep or even getting into the appropriate spirit (Bah humbug!) until after. But I still had to go out and buy him presents – the “Cars” DVD and a Penguins t-shirt and fleece to make a blanket for him 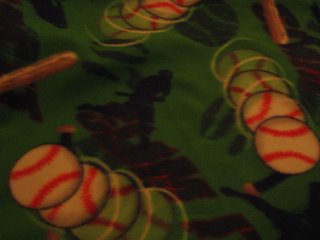 (isn't it hideous? But it was the only baseball-themed fleece they had, and backed with royal blue, it might be ok) and a baseball book and a book about the States that he coveted at the Scholastic book fair last week. So, a typical birthday expenditure, but my God, I just keep handing people my credit card.

I have money issues, can you tell? I grew up with two parents who were children of the Depression, but conversely had no real clue how to handle money. We had enough to eat, and clothes to wear, and somehow they managed to send us to private Christian school, but there was NEVER any extra money, or if there was, there was necessary stuff on which to spend it – car fixed, house repairs, furniture replaced. I can count on one hand the number of times we had any sort of takeout or fast food as a family, we NEVER went out to eat, and my parents’ idea of a date night was attending the PTA meeting or parent/teacher conferences. So it doesn’t matter how financially secure I have been or am or will be – I worry a lot about money. And even though H and I drew up a reasonable budget and I have more or less stuck to it, I am still feeling anxious and worried and like a spendthrift. God, imagine how traumatized I’d be if I had succumbed and bought these: 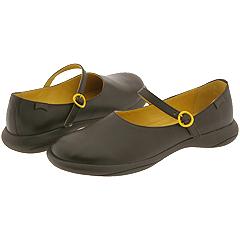 which I am desperately craving.
I might settle for these, in either army green or chocolate brown, or maybe, maybe, burgundy, although they don’t solve the backless problem, which is exactly why I can’t wear my red mary janes all winter long.

So I returned all the not-sure-what-I-was-thinking books and got the following books, all neatly lined up in my new basket, purchased in an attempt to re-impose some sort of order on my chaotic bedroom. 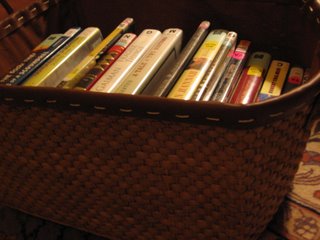 Coroner’s Journal: Stalking death in Louisiana - Louis Cataldie. Because as we all know, I am MORBID. He’s not an especially good writer, but it’s fascinating subject matter.

The Sandman: The Kindly Ones and Dream Hunters
Ah. Volume nine, which I am so jonesing to read that I truly feel like I am having some sort of intense nic fit. Or withdrawal, as I couldn’t find it in any bookstore in the area, and had to wait for the library copy to become available. And Dream Hunters seems worth a look.

The Dead Boy Detectives - Jill Thompson. Based on characters created by Gaiman. Natch.

What the Birds See - Sonya Hartnett
I have no recollection of where I ran across this book. I may get to it, I may not.

A Tale of Two Sisters - Anna Maxted
I enjoy Maxted – she writes fun and fairly smart, well-written chick lit. She’s admittedly lighter than Marian Keyes, but she can develop a plot and characters, which is way more than many chick lit authors seem able to.

Magic Hour - Kristin Hannah
It looked interesting in light of the very good title story of St Lucy’s Home for Girls Raised by Wolves? (The rest of which I found disappointing….)

Fortune’s Bastard - Robert Chalmers
My favorite librarian, on whom I harbor an innocent girl crush, recommended this to me. We raved about Water for Elephants for a bit, I recommended Broken for You, she found me a copy of the new Sarah Dunant as I had to return the one I had since there were holds on it (See, there are advantages to having favorite librarians : )) and she thought I should finish it, and then we both compared our lack of love for Geek Love. And since we were then on the subject of weird dwarf books, she recommended this book, by the author of the fabulously-titled Who’s Who in Hell, which was an ok enough book (if possessed of a weak ending) to warrant checking out a book she recommended so strongly.

In the Company of the Courtesan - Sarah Dunant. See above.

The Railway Children - E. Nesbit. Primo and I have begun reading Edward Eager’s Half Magic and Nesbit is mentioned within the first half a dozen pages.

The Witches - Roald Dahl. Um, no idea. Dahl is a superb writer, but also extremely fucked-up. I am still psychically scarred from reading “The Swan,” from The wonderful Stories of Henry Sugar. So I thought I’d read more…??? Because my therapist has children whose college educations she needs to fund…???

Mirrormask and The Day I Swapped my Dad for Two Goldfish and The Wolves in the Walls - all my Neil. No explanation necessary.

I am STILL plowing through The Book Thief which says more about my emergent ADD symptoms than the book, which is actually pretty good. 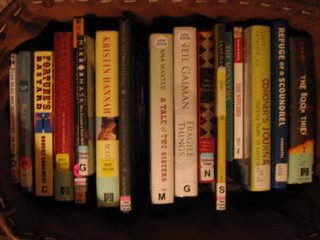 And I am TRYING to learn to knit. I am remedial, however. My dear Suse says you must find an adult to cast on, but I seem unable to see Gina these days and she’s the only adult I know. Or at least the only person whom I know who I know can knit. 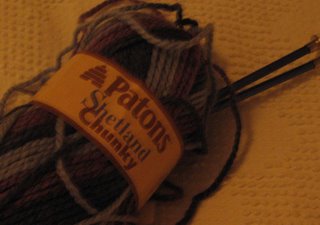 Not that I haven’t been asking practically perfect strangers, so eager am I to embark upon yet another project which shall require my already scattered attention on a regular basis.

Which shall distract me from my true calling - writing drivel for you, my sweet little ‘netties.

Reading this made ME tired.

I can only imagine how tired you are.

I think you might have heard of the Hartnett book from me (man,it's depressing. Beautifully written, but depressing). Am reading Broken for you and am 1/2 way through, love it. Know what you mean about the present-buying. I finished mine in a 3 hr session at the mega-shopping centre, and had to throw in MORE books for the kids as Big W (like Walmart?) has them so damn cheap. The boy's birthday is a week before Christmas so I have to be superorganised and bought him a PLAN treehouse. (I need to get Skype SOON).

I wondered what you were doing for Primo's birthday.

This year is a big one for my boy--DOUBLE DIGITS! We are, as usual, foregoing the big party/gift thing and taking him and two other boys to see the Harlem Globetrotters on 12/26. Woo!

why must you have an adult cast on for you?
send me the wool and I'll cast it on...

I think you hafta buy the damn shoes.

and then they can be OUR shoes.

I learned a lot of what I know about knitting from "Knitting in Plain English" by Maggie Righetti. It has clear drawings and it not dry as a bone to read. She's pretty witty.

In fact, that's where I learned to cast on.

Go to www.knittinghelp.com where there are VIDEOS for all knitting related what-not. You can watch them over and over until you get it. I am particularly fond of the longtail cast on.

Lovely basket for the books. I tried that but ended up breaking the basket by cramming too many into it. I picked up a new one at Pier I, but yours is much nicer!

I think knitting is one of those things you can learn very quickly from someone in person. No elderly relatives around? Happy to show you if we manage another northeast bloggers meet up!

If Gina is unavailable for knitting, I could set you up and drop it in the mail, but that might be a bit silly. Pittsburgh Knit and Bead up in Squirrel Hill, Shady and Forbes, between the sports bar and the sketchy Asian food place, would probably be happy to set you up with a cast-on row. But knittinghelp.com will be good too.

I have a skinny scarf that you might like, I'll take a picture and send it... I will probably never wear it, but it was fun to knit. I <3 Alpaca.

How do you get all these books read and things done? Knitting? And shopping? I'm just happy if I can get my sizeable arse into the shower every day, make meals and maybe do a load of laundry.

Have you seen the new book about the cholera epidemic in London? I was processing it at work yesterday and thought of you. Or are you just into plague books and not epidemics in general?

The campers are great. I used to have four pairs of campers. Count 'em, FOUR. They dated from the time when I was young, mortgage free and cared a great deal about investing in shoes to last a long time with great wear. And then pregnancy made my feet grow a size. Now my sister has four pairs of campers in excellent condition and she's very happy and I'm, well, not.