"Somehow or other it came just the same!"

Yikes. Christmas Eve - it's grey and rainy here, with highs predicted in the 40s, so no chance of snow.

Three of my four boys are coughing like 80-year-old emphysematic men. The nebulizer adds a not-so-pleasant white noise hum to the proceedings.

My brother is expected this afternoon. I am prepared to stuff him full of turkey and wild rice stuffing and jam squares and gingerbread. I was going to make his favorite rum balls but I got overwhelmed - I knew when I was contemplating having the boys roll the rum balls for me that I had truly lost my mind and I punted on those.

Nonetheless, it's Christmas Eve, and somehow that old magic has wormed its way back into my heart - it may skedaddle while I am choking down a plethora of overcooked, cold seafood at my mother-in-law's "Feast" of Seven Fishes. People, tuna salad has NO PLACE on the Christmas Eve table. But for now, I have presents to wrap, and some last-minute gift deliveries to make (the people who make my coffee for me deserve a nice tin of cookies, as well as my friendly and protective mailman), and a Christmas Eve children's service at 430.

To my friends who are celebrating this year with new little people around: enjoy, and kiss that baby for me. The little ones lend a whole new delightful aspect to this holiday.

To all my Internet friends, you are dear to me, and I wish you all the merriest of Christmases.

Is THIS a surprise to any of you? Not to me, uh-uh. I mean, I like my husband and all, but c'mon, folks...we are talking sanity here...(it wasn't till halfway through the article that I realized the option to give up neither was, well, an option.)

In other, not-so-controversial news, both Stephanie Kallos (Broken for You) and (of slightly less importance) Wally Lamb have new books out. I bought the Kallos in hardback, following my usual strategy of giving my money to the authors I want to keep writing (some of you, I am thinking I had better just start writing you direct checks, hmmm?); I may buy the Lamb, but more likely will wait for the paperback.

Otherwise, I am reading Twilight. Shut up. A friend recommended I give it a second shot, and while I still find the heroine wildly whiny and annoying, and it reminds me of nothing so much as those serial novels my best friend in 7th grade and I used to write surreptitiously in math class, I can't complain that it's boring. Oh, no.

I survived Primo's birthday weekend, and am now heading determinedly into Christmas, head down, teeth gritted. Bring on the holiday merriment, goddamnit!

I am awake this morning without a baby attached to me, or a toddler peeing in my bed, or a five-year-old worrying about polar bears, or...well, you get the idea. I am awake. Alone. In the kitchen, on my SECOND mug of hot tea. Pleasantly full of Italian bread and apricot jam.

Today will be better than yesterday was. I swear. I won't yell at my boys for asking for orange juice while I am buttering their toast, or requesting whipped cream on their hot chocolate while I slap together the eleventy gazillionth peanut butter sandwich of my motherly existence. I won't yell at them for asking for a red vitamin instead of a purple vitamin when they KNOW DAMN RIGHT WELL, GODDAMNIT, THAT THERE ARE NO RED VITAMINS LEFT ANDIAMBUYINGMORETODAYISWEARFORGOD'SSAKE!

I hate when I make them stare silently into their cereal bowls and stolidly zip up their jackets and trudge out the door to another day of school, instead of their being silly and loud and loony. And I want to chase them down and cover them with kisses and hug them, and cry.

I wonder if it's right or wrong to tell them that my brain doesn't always work right? Would this help them, or make it worse? It doesn't help ME, but then again, it's my brain.

I showered last night. I swallowed my pills. I slept. All these things have to matter. Yes, the holidays are upon us, but I am taking a deep breath and trying to ride it out. (I will resort to my illicit Valium stash if absolutely necessary.)

Today I have to go buy a new toaster. I should be able to handle this. How difficult can buying a toaster be? (I mean, after I return the one I bought last week because it burns all my toast - but isn't deep enough to burn the full slice...poor planning. Where was Product Development when this decision was made?)

I have a weekend full of odious...I mean, holiday events, sandwiched and stacked and draped all over each other. Full of people and pleasantries and cute singing children and cooing grandparents...oh God, I am tired already.

I'm fine. I really am. Just overwhelmed and dreading all the family holiday crap. Not my immediate little family (I actually love Christmas morning and attending hoopla with my boys). It's all the other obligations that drive me round the bend, that make me want to crawl into my bed and stay there with the duvet over my head till sometime 'round Valentine's Day.

Why didn't I just enter a convent? Or go quietly crazy like Mr. Rochester's wife, so I could live peacefully in the attic? I'll bet they didn't make HER come to Christmas Eve dinner at the in-laws'.

"It's the most wonderful time of the year..." 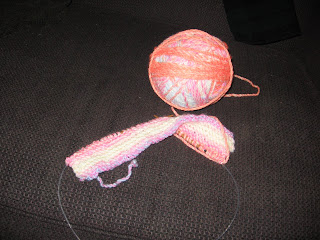 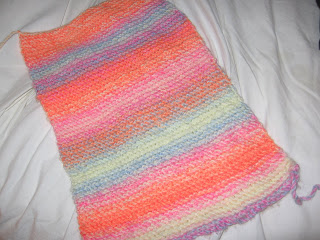 And after I make another rectangle, I will attempt to connect them into a poncho for my niece. All you expert knitters out there, do NOT laugh. Or if you must - and I don't blame you - do it quietly. Thank you. My knitting ego is very fragile at the moment.

Also, I have to finish the poncho, and this 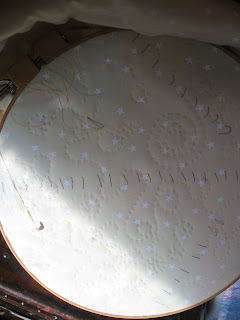 by Christmas, so posting may be as light as it's been, until maybe just before Christmas.

Just be glad I didn't discover plastic canvas, or everybody'd be getting toilet paper cozies or something.
Posted by BabelBabe at 5:02 PM 7 comments:

Email ThisBlogThis!Share to TwitterShare to FacebookShare to Pinterest
Labels: Island of the Aunts, The Monk Upstairs, Venetia

If you don't eat anything all day because you are worried your stomach is still recovering from the Plague this weekend, and then decide to have tea and a couple of slices of toasted, buttered, and apricot-jammed fresh Italian bread for a snack at 4pm, and your baby downs an entire slice of such treated bread himself - don't...um, what? Were the heck was I going with this? You wouldn't BLAME me, because this is delicious and almost good for you. Anyhoo, oh, yes, BREAD.

We have the best Italian bread ever, baked by a teeny bakery in the pseudo-burbs, called Mancini's. My mother-in-law will argue for Sanchioli's (but OF COURSE she's wrong, it's too mushy and soft), and I know people who swear by Rimini's (too crispy-crusted and oily), but I am here to tell you that Mancini's is the BEST. Period. End of discussion. (My baby would tell you the same but his mouth is full of bread and jam right now.)

Which brings me to my second point. (Ha! Like how I did that, acting like I HAD a point?)

Bread Alone by Judith Hendricks.
Wynter Morrison, once a promising baker's apprentice and talented breadmaker, is ditched by her obnoxious executive husband and takes off for Seattle, where she supports herself by working as a baker's assistant.

That's the bloodless synopsis. There are crusty (ha! I kill myself!) work colleagues and devoted old friends, and a quaint old apartment she makes her own, and a couple random quirky characters, and of course love interest(s), but really, all you need to know about this book are the following two facts:

1. It is perfect vacation reading. In fact, it is so perfect that that is where I discovered it. It was sitting on the bookcase in the rec room at our vacation cabin rental, next to the fine literature of Danielle Steele and Frank Peretti. (There was also a remarkably extensive collection of Silhouette romances.)
I picked it up on a lark on Saturday morning and gobbled it down in two days, which, with four boys, and hiking and fishing and making S'mores and birthday celebrations going on around me, is fairly impressive.

2. This book will make you hungry. Very hungry. I ate an entire Trader Joe's Pound Plus bar of milk chocolate with almonds, and the rest of the pan of Terzo's birthday brownies, in two days while reading it. So prepare yourself.

But with Mancini's (NOT Rimini's or Sanchioli's).
Just Mancini's, and, maybe, a little apricot jam.