"This case deserves to be a classic." * 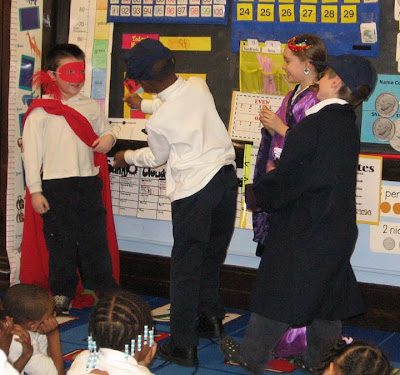 The Queen of Japan narrates the following story:
A young Japanese boy, Sunoco, discovers his father has been killed. He enlists the help of the Queen, who orders Sherlock Holmes to time-travel (from present-day America) to help solve the mystery. Sherlock discovers that Sunoco’s father was murdered by a pig-Latin-speaking Roman centurion who had traveled to Japan for that explicit purpose. The Queen, Sunoco, and Sherlock band together to capture and imprison the centurion. And then Sherlock time-travels back home, and the Queen adopts Sunoco to become the prince.

*Sherlock Holmes, The Adventure of the Priory School

Posted by BabelBabe at 1:00 PM

Well sweet pea, since you are posting, I gonna assume that you aren't in the hospital having that young'un. You are in my prayers.

that's adorable! Was Primo playing the role of Sunoco or Sherlock?

That is some awesome education your kid is getting.

There is little better for a lad than to be exposed to Sherlock Holmes early and often.

This sounds eerily similar to Pepper's Destination Imagination team's play, except you have to substitute Alexander Graham Bell and Elisha Gray and the race to the patent office, take away Sherlock Holmes, and add a walking, talking chicken nugget.

So sweet!!! I can just feel the giggles and smiles :)