See the title up there? The "N@"? Many people from western PA--many of the same people who say "yinz" when they mean "you (plural)"--tack the words "and that" on to the end of a sentence, when they mean, "and other things along those lines". Many of the consonants get dropped off, and the phrase is pronounced, "'n' 'at". Some genius created the symbol and printed up some of those ovualar bumper stickers that people put on thier cars when they go to the Outer Banks, or wherever.

Aren't you glad I explained all that to you? 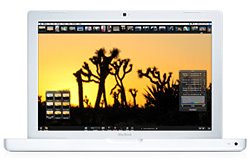 See that? It's mine! All mine! It's a MacBook! It's beautiful and I love it, and I'm posting with it right now. On my couch. Downstairs, in the living room. Where there is no TV or desktop computer. And I got a wireless router, so there are no cables. I'm so happy!

Also, I learned this weekend, doing my reference project, that Rudolph the Red-nosed Reindeer was created by a guy in the marketing department at Montgomery Wards in the late 1930s. They gave out coloring books to kids each year, and wanted something new, so the guy used the story of The Ugly Ducking to come up with Rudolph. His brother-in-law wrote the sonf, and Gene Autry recorded it later, and there you go. The same guy wrote "Have a Holly Jolly Christmas" for the Rankin/Bass Rudolph TV special in the 60s.

I love that I knew just what you were saying in the headline. And! that you explained it. I have to drive a truck to Pittsburgh full of a donation to CMU Drama sometime soon... any suggestions of a time that I should or should not visit you fine city?

I just saw one of these bumper stickers yesterday for the first time and it took me a minute...but I got it. Very kewl.

Visit Pgh in September, when it cools down a little.

That is a fabulous new toy!

Thanks for the explanation. Sarah Louise is always writing yins and I sort of got it :-)
Gorgeous toy - it's nice to see adults get them sometimes too!

I have the Rudolph the Red Nose game from Montgomery Wards.

I got it about eight years ago.

And that explanation at the beginning, I read twice, and still didn't get. I am an idiot.

I second the idea of waiting until September to visit Pittsburgh--it's too miserable here now to appreciate what a nice place it is.

And I don't know if those are Joshua Trees, because I just swiped the image from the Apple site. I've been singing U2 since reading your post, though, so thanks for that.

Carolyn, it makes it a little easier of you actually say it. Look at the symbol and say "EN" (for the letter N) and then "AT" (because of the @). See how it sounds like someone with lazy yet fast speech saying "and that"?

I lived in Pittsburgh for 3.5 school years and one summer (for Pre-College), so I'll definitely stay away until September is over. School pretty much ate any notice I would have taken of the city proper (outside of Squirrel Hill, Oakland and sometimes Shadyside), so I was wondering if there was anything spectacular that I missed all those years. Otherwise, it'll probably be September, so that Dave and Kevin can play with their toys sooner rather than later.

It's why my blog is Pink Sneakers N'at. I am *not* changing over to symbols, though.

And btw, yin is an actual Scottish word, meaning "one." There are a lot of Scotch words in the Pgh-ese lingo. Ergo, yins is more than one.

Soooo jealous of your new toy!

Missed anything spectacular? Um, the North Shore, Downtown, Highland Park--Pittsburgh is the best kept secret this side of the Mississippi. We are second only to VENICE in bridges. So yeah, Katy, if you only saw Shadyside/Squirrel Hill, you only scratched the surface.