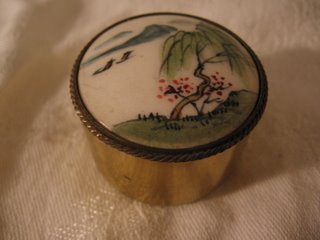 The summer after my freshman year in college, I landed a job with a theatre group at a community college in Jersey.

I was hired as a general dogsbody, as a jack-of-all-trades - I can paint and weld and hammer and wield a circular saw and even sew...but mostly, I was cheap labor.

I had to be at work at ten a.m. and although I got a lunch break and dinner break, I also was on the crew to run the shows at night, so I was not home before 11 p.m. most nights, later if we all went out drinking which we all did ALOT. Now the very thought exhausts me - but at the time I was an enthusiastic and energetic 19-year-old, doing what I loved, doing it well, being paid peanuts for doing it, but learning alot.

There was a whole crew of theatrical misfits, just like at every theatre job I have ever held.
Bob, a big, goofy guy, was the technical director, and his girlfriend Christine was the other general factotum.
Bridget and Corey, two punk types who might have been out of high school or maybe not, were costume people so not around much.
Chris was this older stagehand with a drawl and a long, dark ponytail - he might have been late thirties, early forties TOPS, but at the time -- that WAS older . Now, older and wiser, I wonder, why a bona fide stagehand was slaving as a carp at some podunk community theatre - I mean, other than to give your random young scenics someone to stare at and develop hopeless and inappropriate crushes on...

Then there was Mike. I LOVED Mike. Gosh, how I loved Mike. He was the lead carpenter, and he was smart and incredibly well-read and sarcastic and funny. He was tall and thin and had a head of wooly dark hair and little metal-rimmed glasses, and he smoked which I thought was very sexy. Unlike Chris, who wasn't nearly as smart, and who rendered me mute with desire, or alternately, spouting idiocies with my eagerness to please and engage, Mike was very easy to be around, and he even seemed to ENJOY being around me. He was incredibly patient with my immaturity and naivete - I recall, vividly and cringingly, that the first time we all went out drinking, he politely waited like two hours for me to slurp down my rum-and-Coke (oh, how times have changed!) before packing up and heading home because that is what you do when you are out with people. I was raised by wolves, actually Baptists, pretty much the same, and w hat the hell did I know from drinking etiquette?

I had a brief and ill-considered affair of sorts with one of the actors, who was playing the part of Nicky Holroyd in "Bell, Book and Candle." Richard was dark and thin and romantic-looking, and, it turns out, had a live-in girlfriend in NYC. One of the most important things I have learned in life, I learned from Richard, cad though he may have been: he taught me the importance of living life to the fullest, of dancing even if no one else was, of having a good time whenever you could, regardless of whether or not people think you are a giant dork. Impressed permanently upon my memory is the sight of him dancing on an empty dance floor, to a stupid song he happened to love, just having a good time. I think of him fondly even lo these many years later. 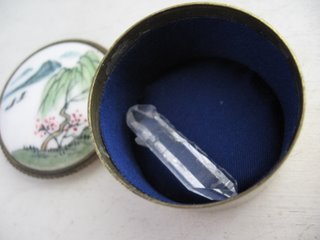 The director of "Bell, Book and Candle" - I couldn't tell you what the other two plays that summer were - gave the cast and crew gifts on opening night. Mine was this little Chinese box, with a crystal in it for good luck and as a sort of joke alluding to the magic and witchcraft in the play.

And that little box was the foundation of my Little Boxes collection. (And that, my friends, is a very poor pun, especially for my friend L, the mistress of bad puns - because the name of the theatre was Foundation Theatre.)

I saw Richard in a guest appearance on "Law and Order" within the past few years, and he hadn't aged especially gracefully; he was stoutish and balding, his exuberant black curls gone grey. I have an old headshot of him in his prime, tucked into the pages of an old journal. Also? he was a very excellent kisser. Sigh. Youth.

As for Chris - one of the high points of that summer was him giving me a backrub one night after the show and telling me that he was waaaayyyy too old for me. Of course he was right, but ohmigod! If he thought he was too old for me? Then at least he'd THOUGHT of me! And, and, oh yay!

And Mike, on whom I harbored a not-so-secret crush for YEARS? Whom I visited several times in NJ over the course of my college years, each time hoping this was going to be the time he kissed me and we got together? And each time we got stoned and drank wine and talked about books and I slept on the couch and he never, not once, touched me? H and I stayed with him and his partner in their beach house in Connecticut right after we were first married. Mike and I sat up discussing books and drinking wine, hours and hours after H and Bill, Mike's quiet playwright boyfriend, had gone to bed.

Oh, God. You are killing me. Could there be a sweeter time in life when innocence abounds or a better story?

This just highlights for me how damnably weird I was in college.

Often, mostly while trying to do curricular revision, I consider how much I learned from hook ups at stock.

But I guess if I took tuition for that method it would make me a pimp rather than a professor.

I don't think my mother would be as proud.

I love your stories.

And as someone who has performed in numerous amateur and semi professional productions, I can picture the cast and crew dynamics and affairs soooo vividly ...

(Ooh I've just noticed there's a man above me in the comments window doing see/hear/speak no evil. Very impressive).

I am loving that there are 22 more sweet little gems to follow.
Thank you!

Love the Prof's see/hear/speak, too.

I love those times, working super-long hours with groups of people you get thrown together with. It always seems like you get the concentrated versions of people in situations like that.

I love this, BabelBabe! It reminds me of my year in California hanging out with a bunch of Turks. Except I think I was waaaaay naughtier than you were.

There's definitely something amiss with fucking Bloglines. GRRRRR. This post didn't register.
Love your stories. Though I'm a little afraid I would have been WAY too square to have been friends with you back then.

You tell a lovely story.

Why have you not yet written a book?

I have the attention span of a gnat, Carolyn. I am lucky I manage to churn out blog entries. But thank you for the compliment.

And Miz S? I was still a recovering Baptist at that point - I got waaayyyy naughtier later.

Attention span of a gnat? That's one of my favourite sayings.