Pay no attention to what the critics say. A statue has never been erected in honor of a critic. ~Jean Sibelius

Why Did I Ever - Mary Robison

This? Was one strange little book. It's meant to be a diary, but it felt more like a, well, a BLOG. And I for the life of me cannot remember when or where I heard about it, what compelled me to request it from the library. No clue. And reading it didn't give me one iota of help in that direction either.

The main character is a woman named Money, who has ADD and job problems and two kids, both of whom are completely messed up in their own ways. She's not especially likeable, and she's a bit of a bitch, but there is some fabulous writing.
For example, Money forges famous works of art for her apartment walls. Her boyfriend - is he her boyfriend? - says,
"What's missing here is a focal point...Something for our eyes to fix on, finally, and rest upon. Something we end up gazing at."
"It's! A! Copy!" I shriek at him

Another perfect line:
Something else that makes me angry is that I got too old to prostitute myself. I wasn't going to anyway but it was there, it was my Z plan.

And lastly, I have to share this, because it rang so true with me, the epitome of the M---- (my maiden name) family luck, that I laughed until I cried.
Here now is Mev [her daughter]. She's standing lopsided, with her arms raised unevenly in question. She asks, "How is it that with red Rit dye, the stuff always comes out that Krishna color?"
"I'm to blame for that, " I say. "It's because you're your mother's daughter."
"Wow." she says and sits down with me on the concrete bench.
I say, "Everybody else gets red."

And that best sums up Money, and this book - wry, funny, honest. Maybe not always comfortable or likeable, but, as a t-shirt worn by a fellow bus passenger yesterday said, "Never a dull moment."

I liked The Girls. I loved the way Ruby's and Rose's separate, distinct voices were developed, their separate ways of seeing life, explored. I loved how matter-of-fact they are about their conjoinedness, how they deal with being freaks. I loved the background stories, about their aunt and uncle, about their neighbors, about the other people they love. I really, really liked this book alot. The only even remotely negative thing I can say about it, is the ending is rather abrupt and unsatisfying, but ...maybe not. Maybe I just didn't want it to end the way it did. And it did suffer for being read right after Rebecca Johns' excellent Icebergs; I found myself confusing some of the characters and plotlines, mostly because they both have a quiet intelligence that draws you into the people's lives and lets you live and breathe with them; and because Canada figures pretty heavily in both books. I liked them both; definitely read both. Just maybe with another book in between.


Savannah Breeze - Mary Kay Andrews
This was my brain candy for the week, in the beginning of the week when I was having an awful day. I laid on the couch like a lump, devoured a York Peppermint Klondike bar (the best!) and devoured this as well. Fun, light, but relatively smart fluff. I really enjoy reading about stuff I enjoy doing, so when the character of Weezie (who recurs from Andrews' Savannah Blues) goes junk-shopping, I was right there with her, glorying in every bargain. The first Andrews I ever read was Hissy Fit which made me laugh out loud. This wasn't as funny, but it was amusing and as always, there's a satisfying and non-cliched romance simmering throughout.

I have to read How Elizabeth Barrett Browning Saved My Life next, as it's due back at the library next, and then Geek Love which I actually started but put down to finish The Girls. I also have a handful of Ruth Sawyer's children's books to plow thru - Year of Jubilo, the sequel to my best beloved Roller Skates, which I didn't even know EXISTED until the lovely Lazy Cow clued me in; My Spain: A Storyteller's Year of Collecting; and The Way of the Storyteller. I already bought The Year of Jubilo from half.com last week, and I will probably have to track down the others as well in the next week or so, to satiate my yearning to own.

We have houseguests coming next week, hence the frenzied porch work and painting and cleaning. It's always helpful to have anticipated guests as otherwise we both find it way too easy to just sit on our butts and eat ice cream. Not that I EVER find that difficult.

We cut the boys' hair last week. They both look about a year older. So sad. So cute, but so sad. Sniff. The baby, though, I refuse to cut his hair until he is at least a year old, so he still has his lovely golden curls. My own little Lord Fauntleroy. Yeah, that'd be it.
Or maybe Kate Hudson's little gir -- er, boy, Ryder. 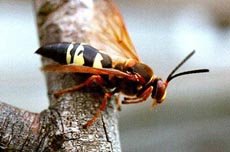 We have these enormous flying insects called cicada killer wasps roaming our sideyard. The things are at least two inches long and bold as brass, but apparently harmless.

I am sitting on my porch typing this. HOW did I ever survive without wireless?

So due to the foiled terorr plot (or as MSN put it yesterday, "Terror plot spoiled!"), passengers can carry on to airplanes nothing but a Ziploc holding wallets, medications, and baby needs. If you are carrying on baby formula or milk, you may be asked to taste it, to ascertain that it is not an explosive. I feel that someone should tell the security guys that breastmilk acts as a laxative in adults, so it still might be explosive, even if it isn't AN explosive.

I am working on a project at work - on my own, not assigned - writing a proposal to develop a blog for the library. Any of my librarian readers, does your library have any sort of blog? Can we discuss, if you do? Just email me. Blogging may be more hip than we can handle, but I am going to give it a whirl. Muchas gracias.

I am now a redhead.

Each of my kids had his 1st haircut at age 6 mos. When NOS was that age he had curly, curly almost blond hair...and my wife used to coo over it because "he looks like a little angel."

One day I caught her cooing and saying "Who looks like mommy's li'l angel?"

As I passed by I just blurted out "He looks like Harpo*" and within the week I was tasked to get his hair cut.

Breastmilk acts as a laxative for adults? I hope to God my tax dollars didn't fund THAT study.

Joke: I stand by the theory that you're slipping small doses of sedative into her food on a daily basis.

My boys were two before they got their first haircuts. Their hair wasn't awfully long but it was curly, right up until we cut it.

I'd like to register, at this time, to be your roommate at Resto.

During the day we can be sales associates and ignore people.

I've never seen a female SA at any RH in my whole life. Only, um, fa-a-a-abulous male ones.

"Silly rabbit...Trix are for kids!"

So in love with the vw ksdjflsjf. (Sorry, this has become my tagline of late...)

Jealous for the wireless...

Wireless? Ooh you're so MODERN.

Me, I'm still getting used to the joys of broadband.

(Pic please of you as a redhead)

I love my hair red, but it is too porous to hold dye anymore. Blast it all.

I think those airport security rules are just for passenger flying out of London.

They can take away my water, my lotion, my shampoo, and my toothpaste. I'll stop flying when they try to take away my book!

The airport security rules are for all fliers...yesterday it was the only thing ON the Today show, the local news, etc.

And I LOVE that quote. It's like the line from Sweet Home Alabama where Reese says "But what if they hate me" and her boyfriend says "Mel, they're critics. They hate themselves."

i am growing my son's hair after my partner took him to the hairdresser and had his silky blonde hair all.cut.off. (That was a bad day for all concerned.)

Love the quote about the red dye. That's exactly my family's luck.

And breastmilk acts as a laxative. Who'd have thought!

I think it would be physically impossible for me to fly without a book. I would have a psychotic break.

The Girls is on my list - glad to hear it's good.

HOW DID I MISS THIS POST?? Is Bloglines messing with my brain. I was in a sulk all weekend thinking 'she doesn't love us anymore', she's not posting. So I just came over to re-read some entries (the way some obsessed people do).
Agree about the boys' haircut. The Boy's is finally starting to grow so he doesn't look like a plucked chicken. Never again.
All those new-to-me books, loverly.
Redhead huh? I'm thinking about joining you...