This is what I remember from my grade school Christmas concerts: we all wore white smocked robes, with big red bows tied at the neck, and we walked up the aisle of the church auditorium (I went to private Christian school) holding lit candles. Now that I think about it, there couldn’t possibly be any way they were actually real, lit candles – could there be? They must have been similar to the battery-operated candles the acolytes at our church carry. I mean, no one, not even crazy-ass fundamentalist Baptists, would set loose in a packed auditorium thirty-five kindergarteners with real fire.
Would they?

I haven’t the foggiest recollection of what we sang, although I can make an educated guess: “Away in the Manger” or “Silent Night.” I can assure you there were no ecumenical displays of musical catholicism – no menorahs, no “Dreidl Song,” no African drumming. 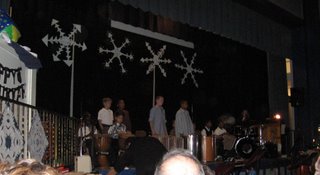 I do recall the excitement, the feeling that now Christmas was really coming, it would be here soon. I recall the thrill of being out long past my bedtime, and bundling up into the car for the ride home through the dark, cold night. The sky was always a giant expanse of midnight blue, sparkled with thousands and thousands of clear, brilliant-white stars. And I drowsed in the backseat with my brothers, my Dad driving, my Mom all dressed up – you always knew it was a special occasion if my mom deigned to put on her girdle – sitting beside him, her good black purse, stocked with peppermints and notepads and pencils for restless children, nestled in her lap.

As we grew older, the performances grew more complex; students played instruments, we sang real chorale-type music, from real sheet music. I was ostensibly an alto but I can’t read music and am essentially tone-deaf, so pretty much was just along for the ride. And quite the ride it was, too – those Baptists really know how to get into the holiday spirit - I distinctly recall one cheery Christmas cantata entitled “Born to Die.”

Last night Primo sang in his first school holiday concert (NOT a Christmas concert, thank you very much, although the musical selections were heavily weighted towards the Christ Child and Santa Claus). But his class sang “My Dreidl” and it was a quick performance. Of course, my camera batteries crapped out on me the moment the kindy kids were taking the stage, and as I fumbled around replacing them, they sang their song and filed offstage. 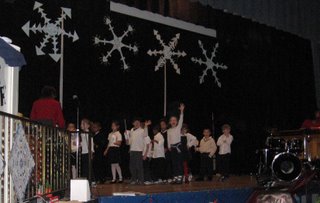 Because what brings Christmas cheer more than a shaky home video of a bunch of cutey-pie kindergarteners singing loudly and off-key, but with such enthusiasm and heart that it could – and did – bring a tear to one’s eye (Not me! No! Not me. But, you know, people. People sitting next to me. And behind me. And, uh, in front of me, too.) 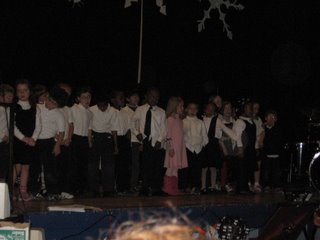 The teachers got in on the act as well, and regaled us with a version of “Jingle Bells” played on – I kid you not – these plastic tubes with which they smacked the music stands; sort of the pool-noodle equivalent of playing the water glasses, it seemed. 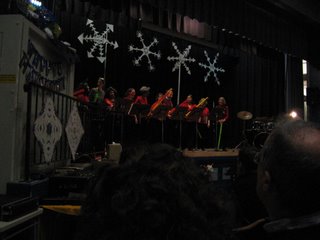 And they sang and rapped a silly little song called “He’ll Be Coming Down the Chimney When He Comes.” Needless to say, the teachers received huge applause, as did the music teacher and the principal who belted out a duet of a bluesy/jazzy/gospel "Have Yourself a Merry Little Christmas."

If it hadn’t been a school night, I’d have swept my boy off to the coffee shop for some hot chocolate with extra whipped cream, and happily allowed him to regale me with excited tales of the dress rehearsal and who was bad and who got yelled at and why his best friend was chosen Student of the Month and how some kids forgot to wear their uniforms last night and did I see how the boys played the steel drums and how did they do that and did I see the xylophones and wasn’t it cool when the teachers played the boomwhackers and…and…and…

The concert made me start to feel the Christmas spirit that so many of us seem to be saying we are missing this year: the concert, and the church pageant rehearsals, and the carols that the boys have been warbling around the house for weeks, and the lists for Santa laboriously drawn up and scratched out and redrafted, and the itching to get the tree UP and DECORATED and LIT, already, what are we waiting for?! and the presents to be picked out and given to cousins and grandparents and beloved teachers. It is a cliché, but it’s a cliche for a good reason: There’s nothing as fine as Christmas through the eyes of a child.

Only six days to go, and I am finally feeling it.
Have yourself a merry little Christmas!

Having spent the day baking (cranberry and orange loaves) then artistically (ha ha) wrapping said loaves as presents for teachers, I can say I'm feeling the Christmas spirit. I love your reminiscences, it makes me long for the sort of childhood you had.

Now that you mention it, I, too, have memories of walking down the aisle of the school auditorium two-by-two with lit candles with a little donut-shaped paper(?) shield at the bottom of the candle so the wax wouldn't drip on our hands.

Feeling... the panic?? I AM! A Christmas concert would probably do my nerves a service...

And a Merry Christmas to you too!

I was sitting in front of you (dry eyed!) and enjoying the concert too. It really surpassed my expectations. I loved the boomwhackers! Loved the brave teacher singing Maoz Tzur (even though I couldn't resist making fun of her a little.) Loved the steel drums and the xylophones and especially that little musical dynamo in the spiked hair and silver dress shirt.

Can't wait to see what they've got in store for Spring.