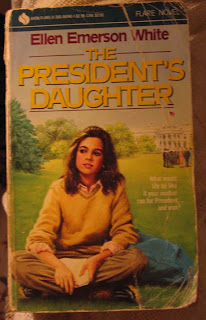 When I was a younger teenager, I read this book to death. It was so funny and REAL, and I desperately wanted to be friends with Meg and her family, if not just like them. I read it so many times, my copy was in tatters.

The sequel, White House Autumn, was just as good, and developed the characters of Meg and her family further by exploring what it would be like to have your mother become the first woman President of the United States, and then having to cope with Presidential things like inaugural balls, State of the Union speeches, Secret Service agents, and oh, yes, assassination attempts.

I was worried that the third book, Long Live the Queen, could not possibly stand up to the other two. It was much darker (Meg is kidnapped by terrorists), but Meg’s indomitable, wry sense of humor shone through. She rises above her own expectations and proves to be brave, determined, and resourceful. In other words, even MORE likeable. It was suspenseful and harrowing, but also ridiculously funny, smart, and insightful.

I read some of Ellen Emerson White’s other books, and while they were good, none of them captured my heart and soul the way the Meg books did. (Although a character in the latest apparently features in a previous book, which I must go back and read now.) Meg was just so COOL, and I wanted to be her friend. I wanted her to like me. Can you really give a higher compliment to a YA novel’s protagonist?

Today, just before [media frenzy] THE SNOWSTORM OF THE CENTURY[/media frenzy], I braved all the crowds stocking up on toilet paper and milk, and went to B&N with several coupons clutched in my frozen little fingers.

I wanted to buy the First Anti-Coloring Book for my nephew, and some more Christmas books for the boys (Diego Saves Christmas for my little Seg, and Ezra Jack Keats’ Little Drummer Boy for Terzo, my Snowy Day fan). And ever since I had noted a comment about it on someone’s blog, I wanted to buy the fourth in the series of Ellen Emerson White’s Presidential series, the brand-new (well, October) Long May She Reign. The saga of Meg and her family in the White House continues, TWENTY YEARS LATER. My God. What took so damn long?! It’s a thick paperback (with a really boring cover), but I dove in pretty much as soon as I got home, a cheese sandwich and an apple balanced on my stomach, and only stopped to take a brief nap.

Meg is eighteen now, dealing with the aftermath of her horrific hostage experience along with the usual college/becoming-an-adult traumas, and oh, yes, her mother is still Leader of the Free World. The writing is for slightly more mature audiences, and just as funny, if the humor is slightly sharper in tone (which is saying something, as Meg has from the first book been the queen of deadpan sarcasm). I LOVE it and am sure I will reread it over and over again, just as I have the other three volumes. I was up till waaaaaay too late last night reading.

For just a little bit, I am sixteen again – totally in a good way.

Posted by BabelBabe at 8:04 AM

Email ThisBlogThis!Share to TwitterShare to FacebookShare to Pinterest
Labels: Long May She Reign, Man Walks into a Room, Terra Incognito

how did I miss that this is the FOURTH book? I think I only read the first one...but yes, I adored it.

My library doesn't have the first two Meg books but I did get my hands on Long Live the Queen and enjoyed it despite the hideous cover. Now the new one is waiting in my basket at work. I might have to move it up my list.