Now back to our regularly scheduled programming…

I am engrossed in the second Sandman. It’s just like driving by a car wreck – it’s gruesome and vile and sickening, but you HAVE. TO. LOOK. You must keep reading. Turning page after page, blown away by some images, wincing at others, knowing there are creatures that are going to dance at the edges of your dreams tonight. It’ll make quite the change from the pleasant dreams of last night, in which I was a reader at some sort of book festival and Ron Livingston asked me out.

This afternoon I began Poppy Z. Brite’s newest book featuring Rickey and G-Man, Soul Food. A fun, quick read, the usual likeable characters – it’s relaxing. And I am halfway through The Book Thief, which I am liking but at the same time am finding incredibly self-conscious.

St Lucy’s Home for Girls Raised by Wolves is just not doing it for me. I will read the title story since Hungry in LA liked it, but mostly I just feel like it’s being weird for the sake of being weird, which I know isn’t really fair. The writing is just fine, but I like my stories to be a bit more straightforward, a bit more classic in form; there’s a reason I have never gotten into any science fiction seriously.

I am pretty much reconciled to the fact that there is no way I am going to write 50,000 words this month. I have already failed at NaNoWriMo. I just don’t have any way to get any more time so I can write, and since H is being dickheaded about me “being glued to that computer,” it’s clear that no support will be forthcoming from that avenue. (Note here, bitterly and immaturely, that I have bent over backwards so he can practice for and perform his upcoming band gig.) However, I intend to continue to write the book – I have a good solid start of about 5000 words, and a detailed outline; I have some nice character development and have done some serious, in-depth research, so I will most definitely keep writing. It’s just that I will have a rough draft in months rather than a month.
And I appreciate very much everyone’s very kind words and support. It’s nice to know I am cared for, even if I am not going to be a rich and famous author.

And now some random thoughts, because that’s how my brain is working these days.

I know there's a meme-type thingey on "Corners of Your Home," sort of like Blackbird used to do show-and-tell. I have never participated in the official "Corners..." and don't intend to start now, but this one photo fits the theme. These are shells from Stone Harbor. The cats often play with them which drives me bonkers, but the shells make me happy, just sitting on the windowsill. 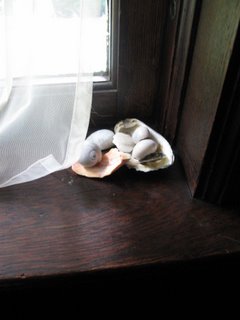 Is anyone else disturbed by the thought of organic Pop-Tarts? I mean, what is the point of that? I once dropped a hot-from-the-toaster chocolate Pop-Tart (the kind with the white frosting) on my hand and that white frosting melted into my skin. It was sort of like those shadows imprinted on concrete by radiation, you know, those tree leaf images seared onto walls by the atom bomb? Organic Pop-Tarts are JUST WRONG. Trust me on this one. 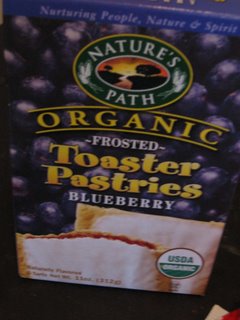 Bonus discovery at Trader Joe's the other day. When we order Chinese, we have to order three orders of dumplings, one for each boy. And they eat them all. It gets a bit pricey. I am hoping these will work out. 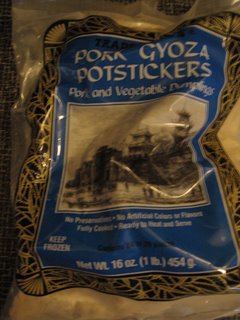 It was cold and grey and drizzly today, the perfect day for hot cocoa for lunch. Seg asked for "his" moose mug, but he doesn't have one since he was not yet born when H brought back Primo's moose mug from a Canadian business trip. Seg wailed his newest complaint: "That's not NICE." (Primo's in the "It's not fair!" stage.) I tried to explain that being nice had nothing to do with it, but he was having none of it, so I offered my dino mug and that made him happy. 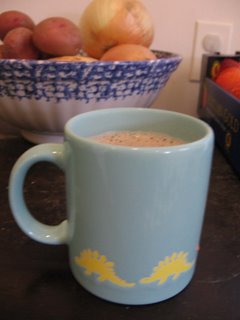 I changed the goldfish's water. And boy, was he happy. Have you ever seen a relieved goldfish? I have now. 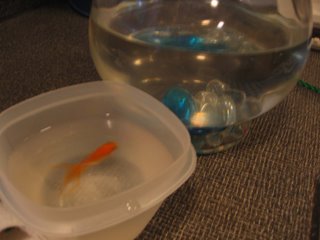 So that's all the news that's fit to print. And then some. And now to sleep, as I am going to attempt to get up early enough to run tomorrow morning. Mostly because I need some more clothes and if I could drop ten pounds, I could fit into most of my pre-baby stuff. But the endorphins are nice too.

That window shot is beautiful.

I think your novel will be all the better for not being spewed out at 1500 words a day, but carefully planned, plotted and written steadily.

I for one can't wait to read it. Or taste one of those dumplings.

I concur. NaNoWriMo is useful when you think of it as a way mostly to get your book off the ground, and in that case you've already got a huge success on your hands. Nothing really great was ever written in a month, trust me--I read the ones that have been all the time.

H should give you a break, IMHO. Don't despair, and don't give up.

Not being one to swear a lot...Ahem!! I say FECK. I have just read your previous blog & sparks were flying from the lips!
Or, as my brother & would say, 'the red mists of rage were descending'
What clotting creep your Mr H (for Arsehole??) is being.
Sorry, not my business?

Hope the dumplings work out. We can get fab fresh ones vv cheaply here: spoilt!

Ditto to wanting to read your book one day.

As for the previous, you touched my heart.

Pop tarts of any stripe are wrong! And I'm so happy for your goldfish...

Hey! How does Soul Food compare to the other two in terms of enjoyability? Because I didn't love Prime quite as much as I loved Liquor and I'm hoping that's not a trend.

I'm with Badger--I loved Liquor, but wasn't all that in love with Prime. How is Soul Food?

I stopped reading the bleak, depressing The Woman Who Walked Into Doors because I couldn't handle the sadness. I picked up Tom de Haven's new It's Superman! (which is super, man!) and am having a much easier time getting out of bed in the morning.

I second what Suse and TLB said.

You will get the book finished and it will be good because you will have taken the time you need to properly develop a book -- I'm sure of it.

Organic Pop Tarts are clearly wrong. Some things should be full of chemicals. I swore off toasting them (organic or otherwise) before eating after I nearly burned the house down at an absurdly early hour one morning many years ago. The best part? I was screaming my head off and no one else woke up.

You will be a rich and famous author. Then you can charter a bus to take care of H. Better yet, charter two, so the job will get done correctly.

Your last post made me sad, and a little worried, but also awed because you write so well. xoxo

The woodwork around your windows is a beautiful backdrop for those shells . . .

I propose you run a competition to elect which one of your faithful loving readers gets to drive the bus.

I'm heading to my beloved Trader Joe's tomorrow, but I'll take your advice and steer clear of the organic pop tarts.

Ditto to what everyone said (you have such wise friends!!)

but I know I can't give it up, S&T like blackbird used to do? Has she officially given it up????

Okay, I have no more brain cells left...I hope the vw's an easy one...