"I never vote for anyone. I always vote against." - WC Fields

I'm not proud of it but that is exactly what I did this election.

I didn't have time to get to the polls yesterday morning, between dropping Primo off at school and running to catch the bus to work. And in the evening, the thought of delaying my arrival home by even the ten extra minutes it would take to get off the bus, vote, and walk the three blocks home was incredibly wearying to me.
I had a rough reference day - a couple interlibrary loan requests I could NOT find - and I pride myself on NEVER admitting defeat; a mailed-in reference request which was more complicated than the ask-ee probably ever intended it to be; and another go-round with the harrassing crank caller. (Why oh why is she calling me to look up the spelling of Italian words, which she has to then SPELL in order for me to look them up? Argh!)

The last thing I wanted to do was go vote, but 1) I did want to go check out the new electronic voting machines, and 2) I wanted to go vote AGAINST Rick Santorum.

The new electronic machines did make voting so much easier, although there was something exciting about voting the old way, stepping into the booth, the mechanized curtain swooshing closed around you, clicking the little levers over to one side or the other, and the satisfying chhh-thunk of pulling the big lever to register your vote. (I felt for the poor pollworkers who were having to explain the electronic process to everyone, including a few old people who clearly were having a very tough time grasping the concept of a touchscreen.)

And Rick Santorum did lose, although of course the schmuck is going to contest the results based on faulty voting technology or some such twaddle. Whine, whine, whine. Sore loser. (He's just pissed because he'll actually have to pay for his kids' schooling now, taxes or tuition.)

I may be the world's biggest dork, but I still get excited that I can vote. I understand the political system, but I stil feel as if my one little vote is making some kind of difference. That I am putting my money where my (big) mouth is. That by registering my vote, my opinion, I am trying to leave the world a better, safer, and smarter place for my boys.

Speaking of - this is the best sight in the whole world: 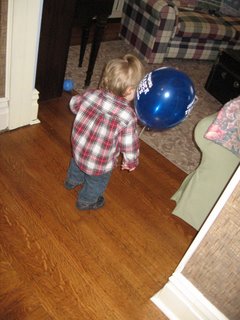 Terzo up and about and smiley. Playing with his Trader Joe's balloon, which I think he thought was another kid. I am replete with joy to see that toothy grin again. (I won't go into detail about the green ooze coming out of his ears, though.)

I did the the same thing regarding Santorum. I don't like Casey at all, but there are few people I wouldn't have voted for to get Santorum out of office.


I always get misty-eyed when I go vote.

How high-tech it is over there. In Australia we have to stand in little booths that look like toilet stalls, and draw dots on pieces of paper with a lead pencil. Then we fold it and post it in the box and go on our merry way to the sausage sizzle that waits just outside. No touch screens, no automatically swishing curtains, no clunking levers. But either way seems to get the job done :) Maybe it's because voting is complusory here that they don't feel like they have to provide fancy computery things just to get us to the booth.

Anyway, well done over there everyone!! I approve of the result :)

I would have given anything to vote against santorum. Good for you.

We had a huge upset here, in that the 15-term moderate Republican lost reelection in a hugely Dem district.

I got all misty here too, but I think it was the smell of manure being spread on the corn fields that made my eyes water.

Hurray for Terzo! Glad the little fella is up and about and smiling again. Earaches are THE worst of all childhood ordinary illnesses, in my opinion!

Surfing Free forgot to mention that the booths are CARDBOARD. With no soft furnishings.

And that whichever school has had its assembly hall purloined for the day gets to fundraise by holding a cake stall AND a sausage sizzle.

So we get to do our (compulsory) civic duty and eat yummy homemade food.

Suse and SF are spot on - we all look forward to the sausage sizzle when we put down our little pencils and get out of our cardboard booths - but given what hanging chads did for the world, low-low-tech seems more attractive all the time.

damn - forgot to say how lovely it was to see Terzo up and about . You brought back all kinds of memories with the sleeping-on-you post and made me realise just how big my kids are now...

I actually take voting very seriously. Perhaps too seriously. It’s partly because I believe it to be our responsibility as citizens, and partly because I have a rule that if you don’t vote you aren’t allowed to complain about the state of the government, and I gotta tell you… I really like doing that.

I always get a little thrill from voting, and I think it was enhanced this year by the combination of voting against Sanatorum and feeling a little like a pioneer woman. I walked to and from my poling station, which wasn’t really that far, but enough to feel like I was going somewhere. The poling place is in a park, and the whole thing is set up in a little storage shed. Bare floors, exposed timber. I felt like one of the first women voters (other than the fact that I was using an electronic voting machine and there was a pushy older man in a business suit handing out fliers for the GOP).

I think the whole sausage sizzle idea would really increase voter turnout in the US. I don't even know what it is but it sounds delicious. I always vote absentee since I prefer to mull it over in the comfort of my own home and never have to deal with changing technology. And am very pleased with the overall results except for my state's Governator. Maybe he is a Manchurian Candidate for the Kennedys but I can't vote for someone who used to brag about gangbangs. Call me crazy. Glad Terzo is up and about, green goo and all.

Oh, I'm green with envy. I would have moved, had I thought about it, just to get the chance to vote against him. I'm glad you enjoyed it.

Politics--meh. But voting? Is great. Working the polls on a day the voter turnout was high? Priceless!

oh, and what joy to see terzo WALKING again!!! JOY, I tell you. So jealous that you've been to TJ. I'll get there...one of these days.