"It’s the sort of novel Laura Bush might curl up with in the White House solarium if it were not about Laura Bush." 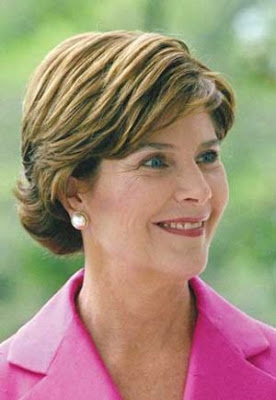 How does someone who seems like a nice, down-to-earth, NORMAL woman like Laura Bush wind up married to George Bush, and as First Lady of the United States?

I didn’t know what to expect from Curtis Sittenfeld’s novel American Wife; I actively disliked her other books. But from the first page of this one, I was drawn in and kept engrossed. I know it’s a novel but I still felt that American Wife slowly revealed to me in perfect, sense-making clarity who Alice Blackwell, and by extension, Laura Bush, was. I mean, there has to be something more there, than just some robotic, plasticine Stepford FLOTUS. I can sense it, and I don't think I am the only one.

I don’t think it’s any secret that I was not, am not, and never will be a George Bush fan. I mean, look at the man - he's a buffoon. He's a child. But I like Laura Bush. I probably disagree with much of her politics, but I think she seems like a nice person. Maybe too nice a person to hang out with me, even. And I don't know how someone like her, someone with a quiet sense of class and decency, winds up with someone like him.

In addition, the fact of the matter is that I want the President of the United States to be smarter than me – and I’d be shocked to find out that George Bush is. But it would not especially surprise me to find out that Laura is at least as smart as me.

And of course, the fact that she’s a librarian immediately conjures kindred-spirit leanings.

The book reveals a quiet, moral, intense, and very private woman to the world. One with whom I found myself sympathizing. One whom I admired and liked and wanted to defend. But I think the most amazing revelation in the book wasn’t how I came to feel about Alice/Laura, but how through explorations of and meditations on Alice’s thoughts and ambitions and opinions, I came to understand Charlie Blackwell/George Bush a little better. This honest take on Charlie Blackwell’s political clumsiness, a quote almost at the very end of the book, explains perfectly just about everything I don’t get about George Bush and his presidency:
“Being president is for him like taking a ninth-grade English test on The Odyssey, and he’s the kid who did most of the reading, he studied for an hour the night before, but he’s not one of the people who loved the book. Besides, he’d always rather crack a funny joke in class than offer a genuine insight.”
(American Wife, p. 525)

Sittenfeld has written a stellar novel, one which I didn’t want to put down, and one which cast some light on the perplexing leading players of current events. If she doesn’t exactly solve the puzzle, she gives us a few useful clues about how to perhaps approach the solution, making me eager to both see what she comes up with next and to enthusiastically recommend this book.

And if I haven’t convinced you, maybe Maureen Dowd can.

I completely agree. I loved this book, and found that Charlie quote wholly applicable.

wv=norkines. that also seems fitting, though I have no idea why.

It really is a great book. I just recently finished reading it.

Stellar? I found it to be an adequate read on the pool float last summer. And when I dropped it, I wasn't all that disappointed.

I couldn't find an email for you, TG - I thought it was extraordinarily well written and evocative in a weirdly quiet yet intense way. I didn't want to put it down, I couldn't wait to pick it back up, and I was sad when it was over.

I liked it. I do think she voted for him in real life, though.

BB - my email doesn't show up? Wonder what's up with that.

I just don't think our reading preferences mesh. I've tried some of your other suggestions - and of course, can't think of what they are right now - and wasn't happy. I even saw Twilight over Thanksgiving and (brace yourself) would have preferred to have been on the Bataan Death March. I can't find anything to read right now that excites me - the last great things I read were The Guernsey Potato Peel Society and The Help. Even South of Broad left me wanting. Am I changing or what? Can't figure it out. I flipped through Olive Kittridge and thought I might give it a chance. The Weight of Silence - bleh - didn't hit me right, either.

Badger and I are the same way. I think she and I would get along IRL really well, but our reading tastes don't mesh at all. All opinions are welcome here. Makes the world go round, etc.

as for Twilight, oh, I get it, totally. If I wasn't in lust with RPatz/Edward, I couldn't stand it. I understand it's awful and trite and stupid : )and I want to smack Bella upside the head.

I LOVED Olive Kitteridge for what it's worth. I also loved The River Midnight, which uses somewhat the same conceit but in an 18th century shtetl. I should write a post about that book, I liked it so much.

Olive Kittridge intrigued me because she seemed to be the bitter school teacher I am becoming but I didn't get very far in the bookstore, so who knows? Christmas was swirling about me and I can't get my senior to decide which college she wants to go to or to apply for scholarships.

Do post about The River Midnight because I like to read how much someone else likes something - at least I'm reading that!

I really liked American Wife -- I felt so much sympathy for Alice/Laura and came to understand how that sensible, practical character could be drawn to that goofus Charlie/George. I had never read any of Sittenfeld's novels before so I didn't have anything to compare this one too.

I'd only read Prep, which I didn't like at all, but American Wife was just perfect. Perhaps it's Sittenfeld coming into her own? I'm now convinced that she's a great writer.