No, not really. A cat or two, lots of brothers, some yarn...no girls. Sorry. Move along.

For Christmas I gave Seg a camera. I didn't follow my gut; instead, I followed the advice of a well-meaning but ultimately deluded salesman, and the camera I gave Seg was craptacular. Until I can stomach the thought of purchasing either a) a digital camera for him, or 2) a new digital camera for me and gifting him with my old digital camera, I have granted benevolent permission for him to use my camera whenever he likes. It sits in its case on the hall table downstairs, and he may use it whenever and for whatever he likes. He doesn't need to ask; he does need to tell me when the batteries die.

I was trying to get a couple of photos of my latest knitting projects, to log on Ravelry and post on Facebook, and when I downloaded my photos, I also downloaded several weeks worth of Seg's efforts. Oh. My. God. People. He may not be the next Annie Leibovitz, but he's awesome and has an amazing sense of humor. I was howling out loud at some of his shots - whole photo shoots of his brothers posing and posturing and playing, and Seg must have just kept snapping away. I will keep him supplied with fresh batteries for the rest of his natural life.

Now, of course, after that build-up, can I post these photos? Nah. They're, most of them, full-on face shots of my guys, and I'm just not comfortable with that level of exposure. I'm sorry. But I can share a bunch of random photos that I asked him to take for me, or ones that feature members of the family whom I can rest assured will never, ever complain about their photo being plastered on the Internets - you know, like the cats. So away we go...

He LOOKS innocent but I assure you, HE IS NOT. 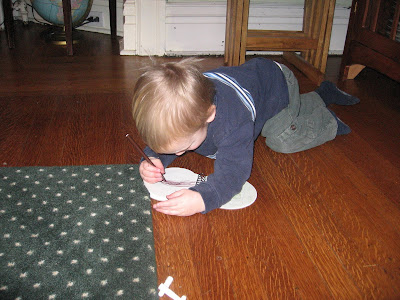 For his birthday Primo received a cool little game called Bananagrams. He doesn't so much dig the game itself as he does arranging the letter tiles on his dresser. There is always a letter of the day, and sometimes, more meaningful messages. 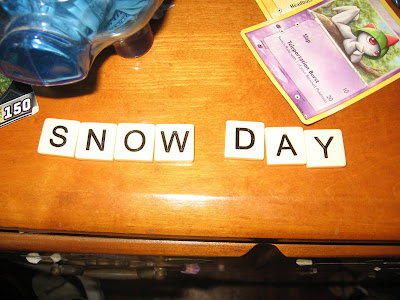 Primo's cat. He's dumb, but now that we've spent a fortune on fixing his cat manparts so he can pee out kidney stones whenever the heck he feels like it, he better stick around. This is the final photo in a veritable photo essay on "Septimus: The Boy Cat Who Pees Like a Girl." (Yes, essentially we paid a buttload of money for our cat to have sex reassignment surgery.) 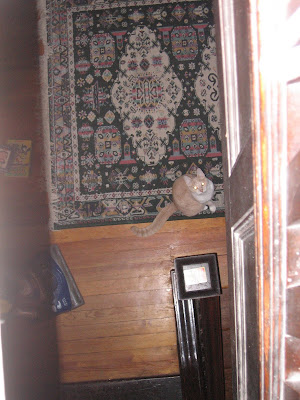 Some book p0rn for you. Six new ones were my lovely Christmas gift, ostensibly from H, but selected, ordered, wrapped, and unwrapped by yours truly. 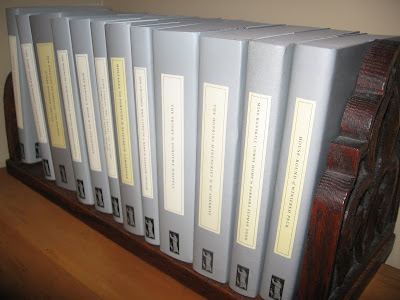 This is the photo you can click on to enlarge so you can see the titles. Go on, I know you want to. It's exactly what *I* do when other people post photos of piles of books on their blogs. 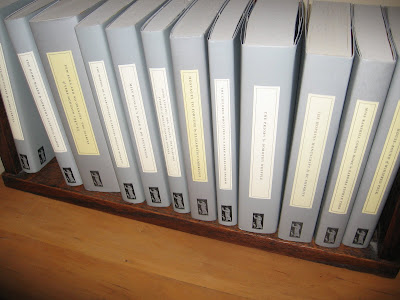 And some office supply p0rn for Badger. This was, and I quote Primo, "the second best present ever." If I'd known he was so easy, I might've been tempted to skip the DS. (But, really? Nice call, Aunt D. Incredibly thoughtful and right on the money for my fussy little scribbler.) 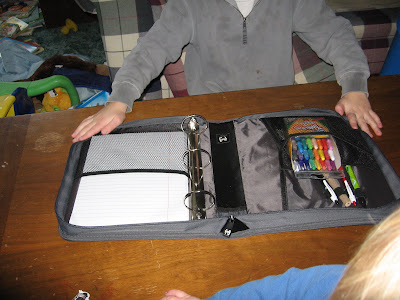 THIS is what happens when you allow your child free rein with your camera. (That rat's-nest of hair? Me. The blondie next to me? We call him Oedipus.) 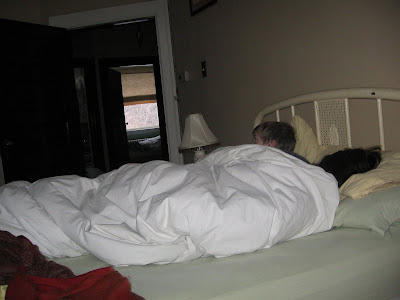 The whole POINT behind this post: my first cowl ever. Knitted for H's cousin's daughter who is in the Peace Corps in Jordan, where apparently they don't heat houses, ever. So, it's kind of cold. This should help keep her warm, and it keeps your hands free, without any fussy scarf knotting or whatever. Knit with James C. Brett Marble Chunky in Denim, on size 13 needles. 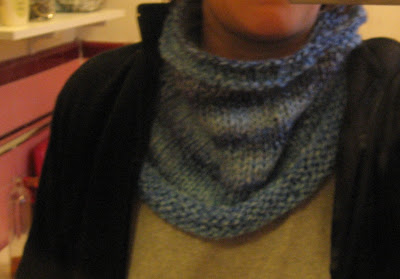 Liked the cowl so much, I immediately cast on a second, as a gift for Peg from The Palmyra Sliver, who is in town for work, and with whom I have dined and drunk beer two nights this week. She's lovely, and we felt as if we'd know each other forever. Which weirdly, we may have, as it turns out she lived six houses down from me on my little dead-end street in New Jersey for one year in high school. Knit with Malabrigo Twist in Sotobosque, on size 11 needles. 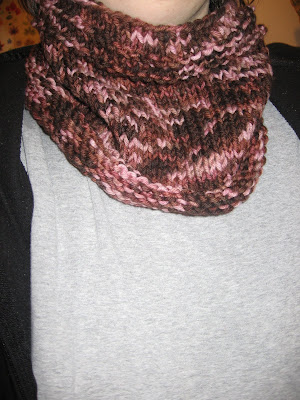 Unlike my Seg, I neglected to take any pictures whatsoever of said beerfests.

Those are Persephone books, yes? I have one kicking around somewhere...I think it's by Frances Hodgeson Burnett...

Thank you for your book pics. You will tell us all about them right?

Nice cowls! I did a mobius strip one and gave it to my mom, and it's incredibly warm.

And OH, how I love that Seg!

Ooh, I don't think I've seen knitting on this blog before, book p0rn, yes.
Lovin' the colourway of the first cowl!

Love the cowls, too. Did you say where you got the patterns?

I changed it up by putting a double row of purl on the top or bottom, to differentiate. I also changed the needle size.