"You can spit shine your shoes, the Pens are going dancing with Lord Stanley." *

It was a hockey night in Pittsburgh! 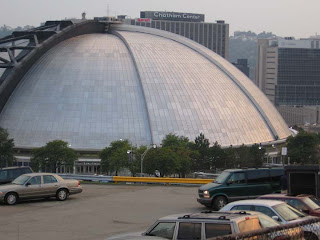 Even though I was adamantly against the new football and baseball stadiums, I am thrilled to death that the Pens signed a lease till 2040 in the new arena. Heck, I could be dead by 2040. Having watched hockey all the way.

It’s only pre-season, but the Pens played their best line-ups. 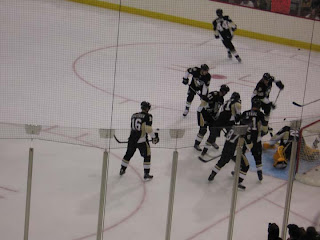 Including the inestimable Sidney Crosby, the boys’ new favorite, impossibly clean-cut Jordan Staal, and my sweetie Marc-Andre Fleury (I know, I am old enough to be his mother, shut up.) 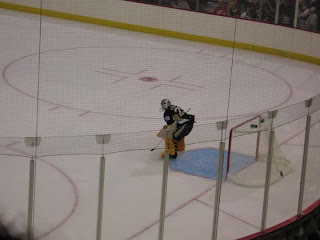 The boys wore their special Pens shirts: Seg his Malkin shirt, and Primo his Crosby shirt. By the end of the second period, they sported NEW shirts: Seg, Staal’s 11: 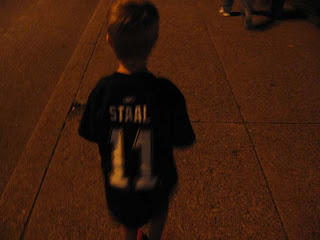 And Primo a fancy schmancy Penguins logo shirt.
I treated myself to a Fleury t-shirt. I know it makes me look like a linebacker, but I don’t care.

Very exciting for the boys: Iceburgh put in a close-up appearance, obscured partially by the big-haired teenager in front of me. 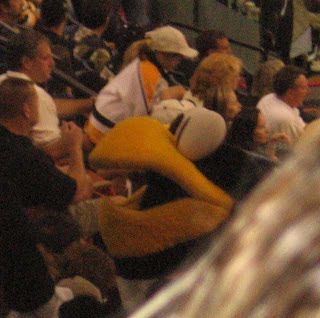 She reminded me of nothing so much as the hockey groupies from the eighties when I was in high school: the blue eyeshadow, the teased and bleached hair, the tight jeans – only they all wore Tocchet jerseys; she sported a signed Colby Armstrong jersey. 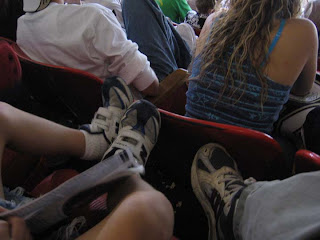 And for some reason, her mother. a perfect stranger, saw fit to tell me that she's just had surgery (a - shhhh! - hysterectomy) two weeks ago, and was on disability from work for two months. And yet there she was, at the hockey game. What possesses people to reveal these sorts of secrets to me? It happens ALL the time. Do I look trustworthy? Do you not know I am going to go home and write about you on my blog?


The boys are as thrilled by the Zambonis as they are by the actual game, I think. 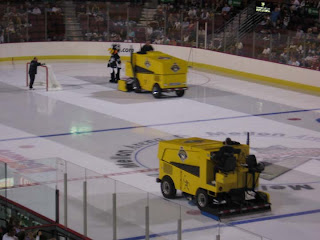 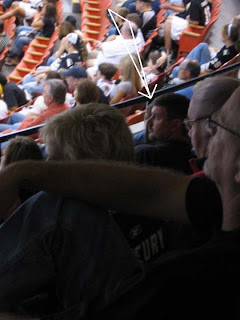 Looks so much like my high school boyfriend would look now that it literally took my breath away. I spent many minutes staring at him, waiting for him to smile, because Frank had an unmistakable smile. He was sitting with his blonde, gum-chewing wife and two kids, a tweenaged daughter and a younger son. I didn’t quite have the guts to go up to him and ask if it was indeed him; I kind of wish now I had.

The game's end result was disappointing – especially after the Pens scored with less than two minutes left - but it was a good, fast game, and a lot of fun to watch. 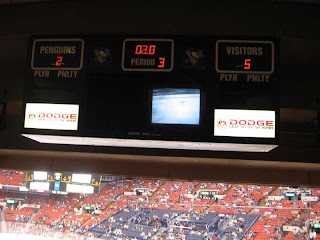 It did seem unfair that the walk back to the car was all uphill. 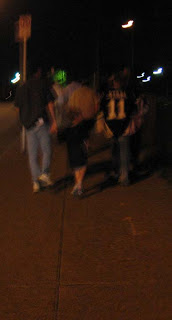 And Seg had to pee.

Everyone was in bed by eleven, and the boys slept in this morning.

It wasn’t quite the relaxing evening a normal hockey game attended just by H and me would be: some beer, a great game, maybe dinner after.
But it was fun nonetheless.

Hockey season proper starts October 6; we are one-fifth owners of two season tickets this year, so I am already lining up babysitters for the Devils and the Sabres games.

We didn’t get the tix to the Flyers game, or I’d have had to break out my Peter Zezel jersey.

* Mike Lange, the Voice of the Pittsburgh Penguins

Posted by BabelBabe at 3:14 PM

Email ThisBlogThis!Share to TwitterShare to FacebookShare to Pinterest
Labels: A Wind in the Door, Mirabilis

Nice. I like hockey a lot, but the Bruins have sucked so hard, for so long, that it's not any fun to watch anymore.

But what did you READ?