The very least you can do in your life is to figure out what you hope for. And the most you can do is live inside that hope. - Barbara Kingsolver

All righty, I am digging this eat-local thang. Let me on the bandwagon! I’ve always been sort of conscious of the vibe, but now I am realizing exactly how much good even just a little effort can do. And I have the zeal of the convert, only not so much converted as convinced. Maybe more on the do-good-to-your-fellow-man and a little less on the hellfire and brimstone, but you know, otherwise...just like a convert.

Barbara Kingsolver has inspired me with her wonderful Animal Vegetable Miracle; Suse and I have been planning our commune’s farming venture (Suse, can we name some of the chooks (that’s Aussie for chicken, my little Internet schweeties) Burp and Slurp? I’ll explain later...), and I have been reading about chickens and chicken coops and chicken feed and chicken breeds pretty much nonstop.

Gina and I have a date on Saturday night to MAKE OUR OWN MOZZARELLA.

I have found a source to recycle plastics 6 and 7 (the city only takes up to 5); once a pile accumulates, I can drop them off on my way to work (which means I have to drive rather than take the bus...hmmm...everything’s a trade-off, I see). I have found a place that accepts paperboard and boxes for recycling, so all our cereal boxes and cartons go in a box to be hauled off once a month there, along with any corrugated cardboard we have amassed. I am contributing kitchen scraps to my neighbor’s compost bin. I faithfully dump several pounds a month of junk mail and scrap paper into one of those fundraising recycling dumpsters. And the grocery store recycles plastic bags of any kind. Our family’s garbage output has decreased from emptying the trash once or sometimes even twice a day, to emptying about once every two days.

Alas, we still have all the dog poop and cat litter to cope with (it’s the only type of “manure” you CANNOT compost – why is that?) - and I am still using disposable diapers. I also am still drinking my share of “Colombian blood” in its 10% post-recycled sleeves and paper cups. But we are working on it. I am in the market for a nice, hefty, refillable travel mug type of dealio...

(But I continue to drag the empty soda cans and bottles out of the desk trashcan at work and throw them in the recycling bins – is it so hard to walk the ten steps to the bins? Really?)

I just requested Joan Dye Gussow’s This Organic Life: Confessions of a Suburban Homesteader from the university EZBorrow program. I also want to read Plenty: One Man, One Woman, and a Raucous Year of Eating Locally, by Alisa Smith, but my public library account is currently blocked because I owe them for a lost book (Primo’s, not mine). And I am trying to track down a copy of Jackie French’s Backyard Self-sufficiency but it is apparently unavailable in the States for less than a mortgage payment or two.

I am also interested in reading It’s a Long Road to a Tomato, by Keith Stewart; Second Nature by the inestimable Michael Pollan, which is sitting on my living room bookshelves; Coming Home to Eat: The Pleasures and Politics of Local Food - Gary Paul Nabhan; and Deborah Madison’s Local Flavors: Cooking and eating from America’s Farmer’s Markets. (As is my wont, I will track down and read voraciously every single book I can find about a topic that has piqued my interest. It’s Droutism, but for books.)

Today – today I built the raised part of a raised bed. It’s only a little bit raised, to account for the slope of the side yard. See why I am terrified my children will roll down the hill and over the wall into the brick alley below? 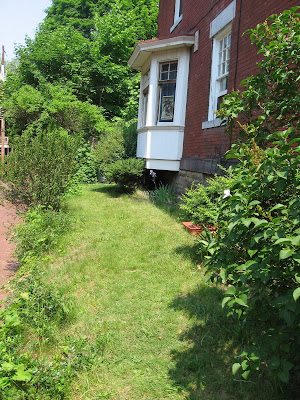 Thank God I have my Matrix. But the little truck, it is missed. 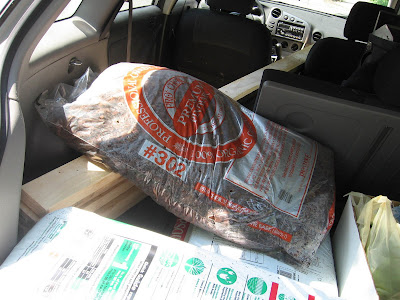 The walls of the bed are contructed of 2x4s which, at a buck-fifty for an eight-foot-length, seemed about the right price. My nailing skills leave a lot to be desired so I just screwed the damn thing together with scabs and 3/8" drywall screws and my weenie little drill, and hope it won’t be moved for a long while. Next comes the fun part (ha!): removing the grass and digging in the peat moss and topsoil. 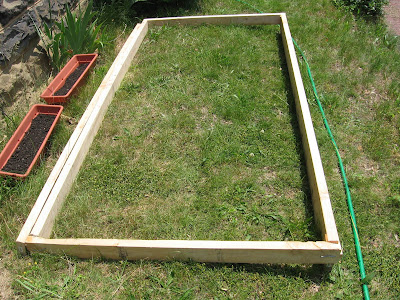 See my collection of studly tools? I DO own a real (Makita) drill, but it’s dead, so I am forced to use my mother’s itty-bitty Black and Decker.
And I love my Sawzall. I have no idea how we lived before we bought a Sawzall. 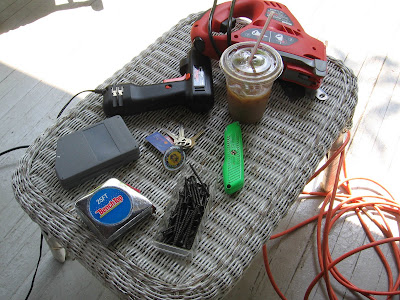 I have been bringing home stray plants for several weeks, and they will be greatly relieved to be in the ground...currently they live on my front steps. 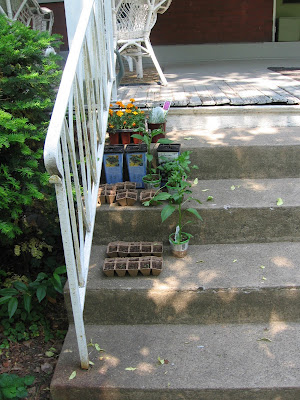 Except my tomato plants. They’re my favorite (shhh, don’t tell the others). They went in right up against the house, where H is terrified I will flood the basement while watering them. (Yeah, I know, hard to believe he’s an engineer.) (Also, I am well aware that my rosemary is looking peaked.) 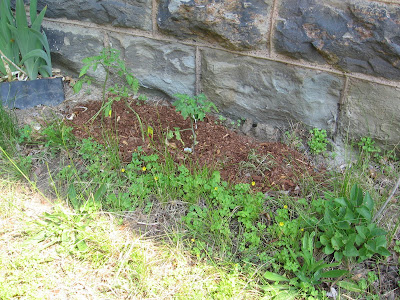 My lettuce trenches come in a close second; I just planted them a few days ago so no sproutage yet but I look forward their tidy little rows marching down the planters. 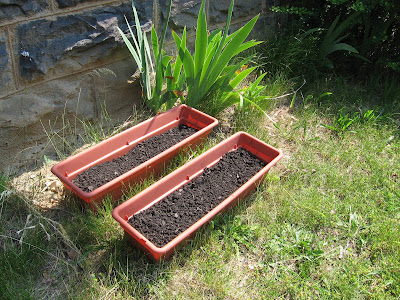 My Shasta daisies seeds have sprouted! I like masses of the things, but started plants are too expensive. So just as at the old house, I dumped several seed packets into some peat pots and voila! We have daisiage. 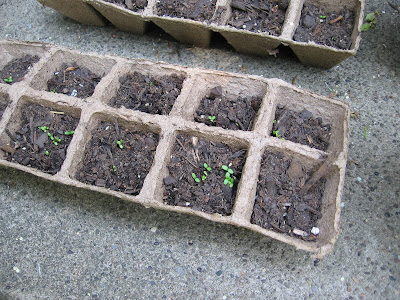 The chives, however, refuse to poke their pointy little heads aboveground. 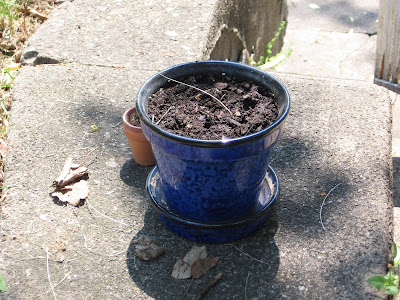 While waiting for the weeniedrill to recharge, I cleared weeds and removed dead-leaf mulch and yanked out maple volunteers from around the rosebushes. We have about a dozen lining the alley wall. We also, turns out, have wasp nests all over the place. Which I discovered after raking out the roots of some dead grass under the rosebush. They were little teeny wasps, and were fortunately even less interested in me than I was in them. 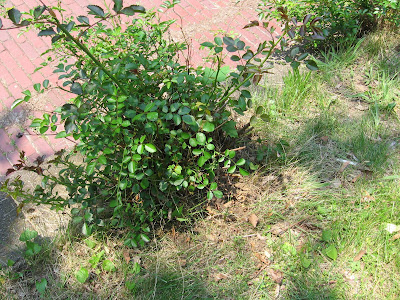 The cat, whose secret hiding-from-Punto place I discovered, was even less interested in me. Go figure. 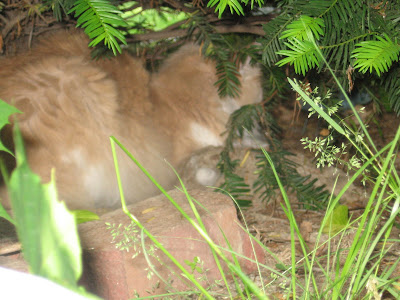 The raised bed is four feet by approximately eight feet. A prefab chicken coop with a covered run would have a footprint only about two feet longer, and if I built my own, I could tinker with the dimensions/layout.
The other sideyard is crying for chickens. 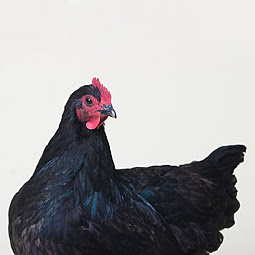 Posted by BabelBabe at 8:42 PM

Next thing you'll be reading is The Foxfire series and totally living off the land.
We get CSA deliveries and it's fabulous. We're still eating last year's tomatoes and salsa (both frozen).
We live in Granola town USA so recycling is easy. We barely fill a trash can every week, and have 3 cans of recycling, which is cheerfully picked up at curbside. I have made the recycling containers more handy than the trash in the entire house. As I am the lazy one! *hanging head in shame*

You do know you're just a hop, skip, and a jump away from putting your dryer sheets and laundry detergent into something pretty don't you?

We recycle everything. We're lucky to live in a town that has embraced that whole-heartedly and I use tote bags at the grocery store.

I know Angie would be proud...

I have a black thumb, but we do recycle everything we can. (in my house that means dozens of wine bottles)

I feel so spoilt that my landlord put in a raised bed for each unit - I would do a crap job of building them, I'm sure.

Let me know which of those other local food books are gooduns, okay? I'm too lazy to dig them all up myself. You're the one with the degree, right? I, the humble student, shall rely on you.

Wow - what a post! We must be travelling is some parallel universe - well on either side of the ocean anyway!

You are doing some great stuff! But, STOP PRESS, you do not have to dig up that grass in your new garden bed! Just do it the "no-dig"/permaculture way of laying down a very thick layer of newspaper which will cover and kill the grass underneath and then add alternate layers of compost/mulch and hay/lucerne. You then plant in small hand spaced holes filled with garden mix soil. I have a short book on it - with pictures! Just drop me an email as I can copy it (as it is out of print) and send it to you. Also I could have a go at locating that Jackie French book for you.

I had a bit to say about this and the mega supermarket monsters in my current post!

Oh, I forgot to add I am building another no dig garden with my neighbour this Saturday and will take some pictures and do a post on it.

I think I've pumped this before, but try 'The Good Life' by Helen and Scott Nearing - the first few pages are hard to get into , but the rest....lovely stuff about creating, working, and living off of a farm in Vermont.

Did you happen to hear the piece on NPR this morning about foods/ingredients imported from China? WHY IN THE NAME OF ALL THAT'S HOLY DO WE IMPORT FOOD FROM CHINA? Why is that necessary?

I just don't get it. If I had the cash to pay of my debts and build a cottage, I swear I would be happy to take my books to the woods and live off the land. Foxfire, here I come.

Oh thank god Nutmeg got to you first. Do NOT dig that grass up. As she said, make a no-dig garden with layers of newspaper, then compost, straw, etc.

Next up you know is getting rid of the disposable nappies (diapers) and moving to cloth, and stopping with the dryer. (Paula, what the heck are dryer sheets? Is this normal American behaviour?). Your garden is crying out for a clothesline, woman!

And yes, you can call two of our chooks Burp and Slurp (is that a literary reference?), if we can also have a Henny Penny.

I'll get you the Jackie French book, don't worry. It's less than $20 here. Parcel heading your way!

I wasn't able to spot your peaked rosemary in that picture. Need new glasses.

P.S. You can't compost dog and cat poo, but you can put it in the worm farm.

P.P.S. Gina, come and build your cottage on our commune! The more boy children the better.

I am so flippin' inspired! If only I weren't stuck indoors with Allergy Boy this weekend! DAMN - I feel like plantin'!

Dog poo *can* be composted, but it needs to be done separately, and the resulting compost should not be used on vegetables. Your flowers/trees/shrubs will be happy, though.

Again, probably too late to the comments party to make a difference, but here's a link to things like biodegradable pet waste bags, special compost bins for pet waste, etc: http://www.composters.com/main_water.html#pwm