"...that's the most extraordinary stuff I've ever tasted! It's shattering!" - "Big X" Bartlett, in "The Great Escape"

Gina and I tried our hands at cheesemaking this past Saturday night. (Yeah, we live la vida loca over here.) I was hungry on the way over to Gina's, having skipped dinner, so stopped for some fries - this juxtaposition amused me. (I am sorry, I HAVE read Fast Food Nation, and I understand McDonald's is an evil, corporate giant, but I owe them some gratitude for getting me through all three pregnancies alive.) 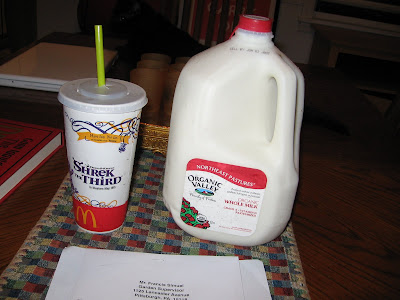 We followed the recipe for Thirty-Minute Mozzarella in Barbara Kingsolver's book Animal Vegetable Miracle (I am starting to feel like a shill...), but you can also find the recipe online at the New England Cheesemaking Supply Company website. The milk was organic, pasteurized whole milk I bought at the East End Food Co-op, which is also where I found the rennet. Gina drove down to South Hills Brewing for the citric acid. The thermometer was an old candy thermometer I had lying around. It was mildly inconvenient that the temps we needed to observe were under the milk, but we figured it out. We started with the gallon of cold milk; at 55 degrees F, we stirred in the 1/4 tsp of rennet dissolved in a quarter-cup of bottled water. 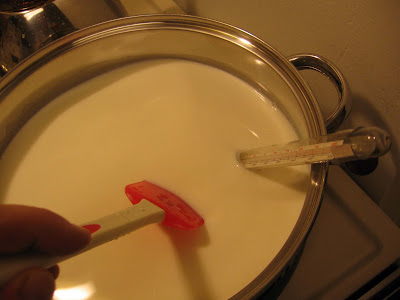 We stirred languidly, the pot over a medium-ish flame.
Just as we were saying, "It's not DOING anything," the milk began to curdle, just the teeniest bit, at about 88 degrees F, as promised. 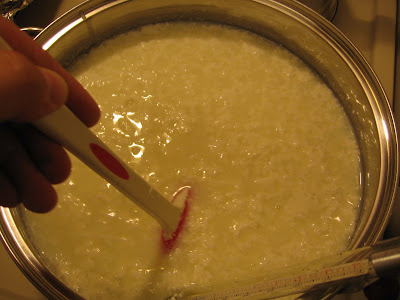 From there on, we exhibited a leetle bit more faith, added the (1/4 tsp dissolved in water) citric acid, and the curds, they came. Right about at 100 degrees F, again as promised. The whey became sort of clear but yellowish. Very attractive. (Like the juvenile I am, I observed that it sort of looked like vomit. Well, it DID.) 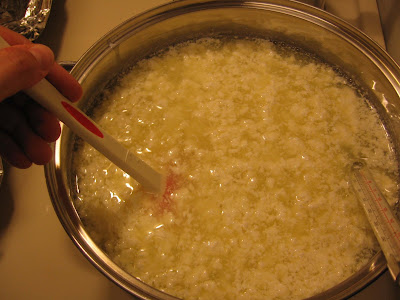 We scooped the biggest curds out, but resorted to a colander/strainer type thingey for the rest of the draining. If you were going to use the whey to reheat the cheese, you would want to drain into something, but we - wasteful people and not having any handy piggies - poured it down the drain. (Gina observed, more than likely correctly, that this was probably the first time whey had ever been poured down that drain.) 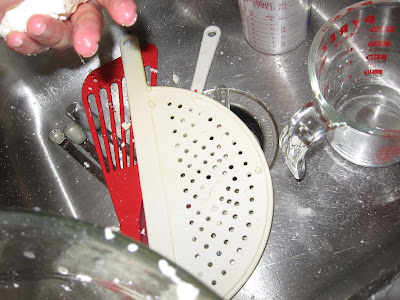 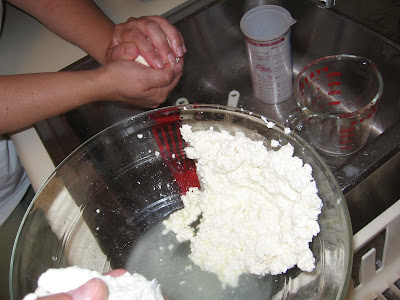 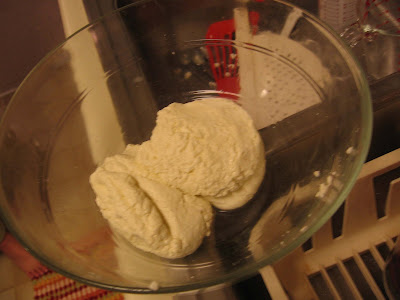 Finally, we had something resembling cheese. (On top of tupperware, as all of Gina's plates are white, and the cheese wasn't shown off to full advantage on them.) It smelled good, and it looked ok, rather...cheese-like, even if I do say so myself. I can't wait to try mine on homemade pizza tonight. 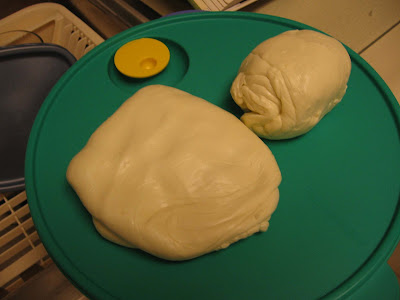 See how CUTE? I am SO giving people homemade mozzarella cheese for Christmas this year, wrapped in foil over the wax paper and tied with ribbons at either end. So festive, cheese bon-bons. You know, nothing quite says "Season's greetings!" like a ball o' cheese. 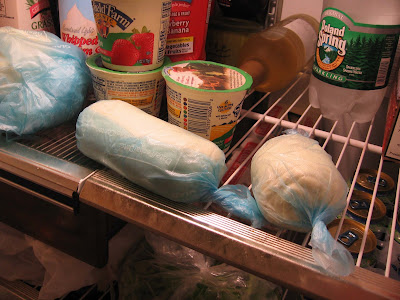 Posted by BabelBabe at 9:10 AM

You cannot imagine how impressed we, here in Tuvalu, are with this endeavor.
AND WE SALUTE YOU.

I wonder if this is doable with soy milk as all the soy cheese I purchase SUCKS!

I completely forgot to mention how much I enjoyed your wringing out the cheese song. :)

Very impressed
- and a tad jealous that you DID that. I'm afraid that will probably sit on my list of things I'd sort of like to do.....

Don't forget--there was butter, too. But the food processor did all the work on that, while we sort of stood around and raised our eyebrows as the heavy cream went through its stages.

I am bowing low.

I saw a husband/wife team using a cloth between them to make fresh mozzarella balls. I missed the first part of the show; all I saw was this masochistic tango with the cloth - they really worked up a sweat.
And YES! My hat's off to you and I'd be thrilled to get fresh cheese. Anytime. I'm thinking the holidays are stressful enough without adding cheese-making to the deal, however...

My copy of the Kingsolver book arrived last week. It's such a beautiful book - rough edged pages, textured wrap-around cover, etc. I will read it when I've gotten past "just looking at it"!

Isn't there a line from Monty Python - "Blessed Are the Cheese Makers"? Or is that by someone else? Anyway - a job well done :-)

This looks amazing! Good for you.

Blessed indeed are the cheesemakers...That would be Life of Brian. My old roommate used that expression when she made cheese, too. My mom would be appalled at your waste of whey. Beats me what she uses it for, but I know she does.

You're not the only one obsessively referring to Barbara Kingsolver these days, don't worry.

I'm trying this with RAW milk.

Late to the comments party as usual, but after reading, I ordered the necessaries from New England Cheesemaking and as soon as they arrive I'm trying my hand at this, too. They say you can use whey in recipes that call for milk or water, but you'd want to choose those recipes carefully (I'm thinking biscuits).

I don't think I can wait for the library reserve copy that is taking forever. Must purchase this book.

You are my new hero!

(Not that you weren't before, but puh-leeze - MOZZAARRRRREEELLLLLAAAA!)