“I had other priorities in the 60's than military service” - Dick Cheney, vice-president of the United States

What do I have today? Other than an indignant political post brewing, that is...let's see....

Dropped my older brother at the bus station this morning. He’d been here since Saturday, and his visit was great. He and the boys played a lot of hockey in the backyard, he accompanied Primo to his first t-ball practice, he played Stratego and Don’t Wake Daddy and dominoes with the boys all weekend long, and he watched The Baby while I ran Seg to the pediatrician yesterday (poor little guy has an ear infection, complete with perforated eardrum). I cooked this amazing Parmesan chicken on Sunday, and salmon with roasted fennel and onions yesterday, and we demolished a Victoria sponge layered with mascarpone and homemade lemon curd (most successful experiment). Not to mention a shocking amount of alcoholic beverages.

About that ear infection: Seg started complaining his TEETH hurt on Friday. Lots of crying and whining, lots of clinginess; I dosed him up with Motrin and stuck a warm water bottle on his pillow, under his face. Called the pediatrician and got an appointment for Saturday morning, which I called and cancelled because he was fine all night and woke up Saturday perky and chipper. However, by the time I got home from work on Saturday, the pain was back, and by Sunday had migrated to his EAR. Injudicious pouring of Motrin and he was mostly fine, but I took him to the pediatrician first thing Monday – or at least, as soon as they could fit him in. He was VERY BRAVE while they dug out tons of wax and dried blood and pus from his ear. The doctor thought it had ruptured probably Saturday which is why he felt so much better that morning, but she put him on two kinds of antibiotics, and Motrin for the pain and fever till it eases up. He slept all through the night last night, seemed fine by this morning, and indeed was healthy enough to get into a screaming match with Primo over whose hockey gloves were whose after breakfast. Not to mention teasing both brothers that HE got to drink “yummy pink medicine.” Ah. All better. 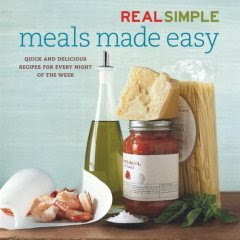 And about that amazing chicken: I bought Real Simple: Meals Made Easy at the library’s Half-Price Scholastic Book Fair a few weeks ago, and it has become an inspirational source for meals. Who isn’t sick of cooking the same old thing all the time, and unfortunately we cannot live on desserts from Nigella (not that I wouldn’t like to try, mind you). Some of the Amazon reviews complained that the recipes call for things the “average home cook” might not “stock”, but c’mon, anyone who cooks at all keeps chicken breasts in the freezer, and a stockpile of dried herbs handy, don’t they? Seriously? A couple recipes will NOT be attempted – the very idea of eggs baked in spaghetti sauce is indeed revolting – but I have the Cannellini-and-Tuna salad on tap for tomorrow night, I will probably give the vegetable pasta, the chicken souvlaki, and the roasted cod with potatoes a whirl at some point, and I will most definitely make the Parmesan chicken and the fennel salmon again.

I am cranking through and once again enjoying End of Mr Y. I realized that, despite the fact that it is a novel, it covers some pretty profound philosophy, and so I need to take a break now and then. I am halfway through Susan Isaacs’ Past Perfect, whose heroine is whinier and more insecure than Isaacs’ heroines usually are, and with whom I feel no empathy at all, again, most unusual for an Isaacs book.

I pick up Salley Vickers’ Instances of the Number 3 at my library’s ILL today, and then Lord’s Byron’s Novel: The Evening Land, The Secret of Lost Things, and Scarlett Thomas’s first detective novel Dead Clever at the public library, on my lunch break. Plus, I took home Sophie’s World last week, to bone up on my almost nonexistent philosophy knowledge.

Fair weather and lots of good reading ahead!

Posted by BabelBabe at 1:50 PM

Email ThisBlogThis!Share to TwitterShare to FacebookShare to Pinterest
Labels: End of Mr Y, Past Perfect

You are in for a treat--Sophie's World is delish!

I think I have sympathy ear pains as well! Sounds yucky. But the Victoria sponge does not!

How awful for Segundo (not to mention you). My favorite medicine when I was his age was the grape Dimetapp.

Lots of good reading ahead, indeed... I've finally requested my first Maisie Dobbs from the library.

I think I had better have a go at Sophie's World again as the first attempt was made at a time in my life not conducive to much deep thought. But having consulted my librarything.com it seems I have ... gasp ... thrown it away. Like I said - I was a black hole there for a while!

I have to agree with everyone here when I say I feel for her.