The teacher sighed and shook her head... "Here in France the chocolate is brought by a big bell that flies in from Rome."

Just in time for the holidays: 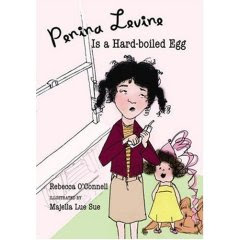 First up, Rebecca O’Connell’s newest children’s novel, Penina Levine is a Hard-Boiled Egg. The driving plot point of this engaging children’s book is that Penina’s teacher gives her class the assignment to write a letter as the Easter Bunny to a kindergartener at a neighboring school. Penina celebrates Passover, not Easter, and is uncomfortable with the Christian overtones of the assignment; although Ryan, the only other Jewish kid in her class, does the assignment readily, she refuses to do it and her teacher gives her a zero. As one Amazon review pointed out, it is somewhat hard to imagine a public school teacher being so culturally insensitive these days, but you find out that the teacher is very young, and she is a substitute teacher, and she really doesn’t seem to understand the religious significance of the Easter bunny. (“It’s not called the Springtime Bunny or the Candy Egg Bunny,” Penina says. “It’s called the Easter Bunny, and Easter is a religious holiday!” Seems pretty dang clear-cut to ME, too.)

I thought the illustrations were distracting and unclear, and Drawn-Penina looked nothing like my Imagined-Penina, but then, I am a bit of a stinker about illustrations. (Someday I will regale you with my treatise on poorly-drawn comics, but not today.) I found Penina’s relationship with her parents and little sister Mimsy a bit puzzling; her parents seem loving, and appreciative of Penina’s unique personality, but they also do seem to play favorites with Mimsy, who is pretty much just the stereotypical annoying younger sibling character. I think some of my unease with Penina’s parents comes from the fact that, simply, I am not used to reading children’s books in which the adults are allowed to be as complex as they can be in real life – I think I need one of my children’s lit experts to read it and give us her take. Jess? Thanks.

However, I loved the scenes with Penina’s grandparents, especially her funny and sweet grandmother whom I would like to have adopt me, and I enjoyed very much the details of the Seder; I also liked the subplot of Ryan’s grandmother, a Holocaust survivor, coming to visit Penina’s class. Penina herself is a winner - I liked the kind and intelligent way in which she ultimately makes her point to her teacher, and I loved Penina’s stubbornness, her enthusiasm for her heritage, and her refusal to be untrue to her nature. I found Penina downright endearing, the sort of little girl I would have liked to be friends with. Rumor has it that Rebecca’s next book is titled Penina Levine is a Potato Pancake - I look forward to getting to know Penina even better. Plus, I LOVE potato pancakes. 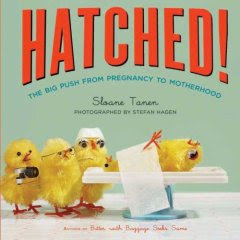 My favorite tableau in Sloane Tanen’s charming and wry little book featuring anthropomorphic chicks: a mother chick sweeps her messy house, surrounded by a baby in a bouncy chair, the detritus of a day caring for baby scattered around her, and her husband in an easy chair, beer in hand, glued to the football game on the wide-screen TV. The caption: Other than paying the bills, Esther’s husband was useless. What she needed was a housekeeper. What she needed was a friend. What she needed was a nanny. What she needed was a polygamist looking for a fourth. That happened to be my favorite this moment when I opened the book; with the numerous honest and amusing gems in this book, I seem to have a different favorite every time.

Tanen’s take on motherhood via her little chickens is fresh and funny and every mother out there will be able to relate to the quirks and perks, the traumas and tribulations, of pregnancy, birth, and those first crazy months of keeping your infant alive. I had almost as much fun perusing each photo for the little props and accessories as I did reading the actual captions. Most of the chickens are better dressed than I am on any average day! (Not that that is that hard...)

I was so enchanted by these little balls of fluff that I bought Tanen’s children’s counting book, Coco Counts: A Little Chick’s First Book of Numbers, for Terzo for his Easter basket.

And now, an Easter recipe. H’s birthday always seems to fall around Easter; this year, it’s this upcoming Tuesday. So when my mother-in-law asked me to bring dessert to Easter dinner, I thought I would take my newly-discovered (!!!)(after TWELVE years of marriage!) knowledge of H’s love of lemon cake and produce the most amazing cake I have EVER tasted: Triple Layer Lemon-Mascarpone Cake. I made it once for Mother’s Day ages ago and haven’t made it since, as it’s time-consuming and huge and incredibly rich, and therefore just not the sort of cake you whip up so your family will have a sweet treat to enjoy over the weekend.

For your viewing pleasure (all right, it’s a little bit lopsided, but I’m a baker, not a food stylist, Jim!): 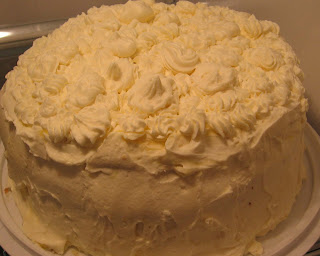 Your mission, should you choose to accept it:
Triple Layer Lemon-Mascarpone Cake

Posted by BabelBabe at 6:15 AM

Wow, that cake! Jeanne Ray would be proud!!

I wish that whole section on how to describe Easter in French could be your title. Makes me smile just thinking about it.

I think it's neat that you learned something new about H.

I think it's *very* neat that you took that knowledge and put time and effort and love into that cake for his birthday.

Happy Easter to you and yours.

The books look good. And that cake! I love lemon cake (and lemon pie and lemon bars) as well. I might try it.

Also, I have Bitter with Baggage (from the same lady that did Hatched) and I lurve it!!

That cake looks wonderful. More work than I ever want to do, though. I think I stick to lemon bars and pretend they are cake.

Mmm, cake. I'm sure there's an occasion coming up that requires me to make that.

I put Penina Levine on hold, but it's still on order so it might be a while before I can weigh in with my amateur expert opinion.

I had to get out that Sedaris essay and reread it - "a bell, though - that's fucked up." It kills me every time.