Synopsis: In the Babe household, one's actual birth-day is celebrated with cupcakes. Often, some school friends are invited over to share in the festivities. It's a much more relaxed event than the official family birthday party, which is traditionally held on a weekend, involving food for dozens, amazing mayhem, and a full, decorated birthday cake. Not to mention hours of interaction with H's family, and lots and lots of stress for BB.
To make the cupcake birthday event even more pleasant, although perfectly capable of baking cupcakes, BB chooses to purchase delicious cupcakes from a local bakery. The only nod to organization is calling the day before to make sure two dozen cupcakes will be available on the day.

Produced and directed by BabelBabe.

A neighborhood street in Little Italia. A cop walks the beat, old Italian men sit on benches in the sun, a burly man unloads a beer truck into a bar’s basement.

BB walks from the bakery, pushing the umbrella stroller that steers much like a tractor-trailer, box of cupcakes balanced on top.
She is 1) trying not to spill the venti nonfat latte tucked into the stroller basket; 2) trying to gently turn the stroller over the curb so her darling birthday boy does not get smushed by oncoming traffic; and 3) trying to avoid running smack into the oblivious man who has just turned the corner and cut her off. We watch, horrified, as in slow motion the white bakery box containing two dozen cupcakes (“assorted flavors, assorted frosting”) slides gracefully off the back of the stroller top and lands – with a soft, sweet, sickening thud – this-end-up on the sidewalk.

Cut to: BB crouching on sidewalk, assessing damage.
The box is still sealed; the tape held.

BB: Shit! Shit fuck goddamn it all!
Passing Woman: Oh. Oh! Now that’s a shame!
BB: (looking up and around blindly) What? Huh? Oh, yeah. Yeah. Thanks. (under her breath) Shit shit shit!

She picks the tape off the side of the box, opens it to assess the damage.
Close zoom to inside of box.
Cupcake carnage. 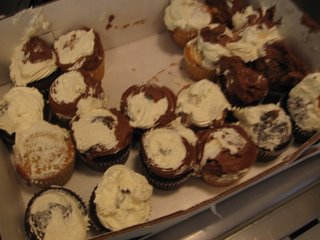 Zoom out, slowly. BB sits on the sidewalk, vainly trying to right the cupcakes, smearing frosting all over fingers. She clearly does not know whether to laugh or cry; she opts for a little of both. Hysterical laughter, teary eyes. She sits right down on the sidewalk, righting cupcakes, talking to The Baby.

BB stands up, tapes the lid back on the box, and carries it any which way – because what does it matter NOW? – back to her car, pushing the stroller in front.

Back at the house.
Cupcakes are lined up on the kitchen counter, scraped clean of their frosting.
They look vulnerable, like Marine recruits who have just been shorn – nekkid cupcakes. 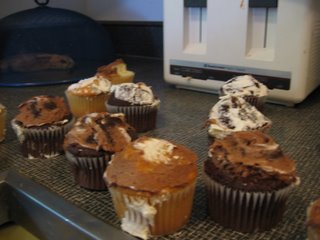 All the frosting BB can salvage, from the inside of the box lid and from the cupcakes themselves, is piled into a little Pyrex bowl. It’s chocolate and vanilla, but with a few quick turns of the spatula, a lovely pale tan frosting is born.

BB: (quietly) Hmmm. (licking fingers thoughtfully) Not too bad. They just might do.

Pleasant background music.
Afternoon sunlight streams in the kitchen window.
BB hums and frosts, hums and frosts (something perky and vaguely childlike, such as a Muppets tune or Row Row Row Your Boat).
She could salvage only about 2/3 of the original cupcakes, but it should be enough. She twirls her finger around the almost-empty frosting bowl and pops it into her mouth, followed by a giant bite of one of the irreparably damaged cupcakes.
Thoughtfully, she surveys the repaired cupcakes.
Zoom way out, to a shot of the entire kitchen, BB a lone, proud figure, standing by her damaged cupcakes, frosting spatula in hand.

BB: Not too bad at all. Nothing a few chocolate sprinkles wouldn’t disguise.

Up tempo music begins to swell.
With a flourish, she scatters an entire jar of chocolate jimmies over the reborn cupcakes, and voila! A cupcake star is born.
Triumphant music.
Zoom out to box of repaired cupcakes. 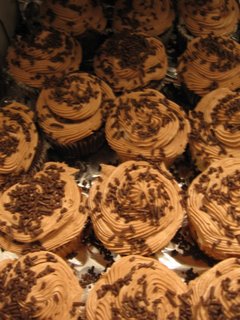 A wide-angle shot of a full dining room, glasses and plates all over the table. Pan the room. Children hang off dining room chairs, eating cupcakes, sticking fingers in frosting, yelling out, “Vanilla one for me!” or “I want a chocolate one!” Parents, trying to relax but keeping an ever-vigilant eye on their offspring, stand in the background, surveying the scene. BB sits at the end of the table, looking like she wishes she had a drink in her hand rather than a chocolate cupcake and a glass of milk at her elbow.

One small person in particular has inhaled his cupcake, seemingly in one breath, leaving just the faintest smidge of tan frosting in his hair, and a few sprinkles stuck to the collar of his shirt. 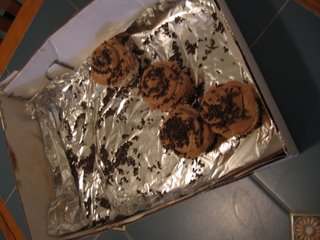 That's what I was thinking ... as long as the cupcakes stayed in the box, you don't need new cupcakes, just new frosting.

Happy Birthday to the birthday boy !!!

And there is NO WAY that kid is a year old already. NO. WAY.

Indeed he is. and strangely enough, I STILL look pregnant. Sheesh!

Badger and ssheers are right. Good save indeed.

I like that never-say-die spirit in matters of baked goods. Shows a certain je ne sais quoi.

You're very skilled in the art department.

Bravo and a standing ovation.

And yes, can Terzo really be so grande already??

Since one of my kids only likes the frosting part of a cupcake, I will now have that image of newly shorn Marine recruits flash every time he hands me his licked-clean cupcake. Heh.

You are amazing. I would have sat on the curb and ate them as is, all by myself.

I would've kicked and then stomped on the box! You showed mighty restraint, Missy.

And HAPPY BIRTHDAY again to Terzo!

You are now a Mama Blackbelt.

I? Am impressed. I probably would've served them as is. Or eaten them on the curb.