"Another turning point, a fork stuck in the road..."* 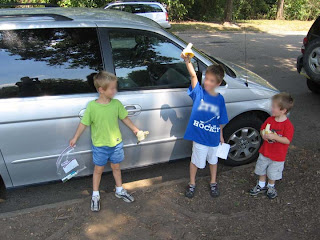 Every good adventure begins with – climbing in the minivan and driving to a starting point? Uh, not necessarily, but in this case, yes, yes, we did just that. 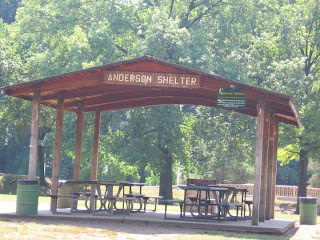 The picnic pavilion in a city park that was the TECHNICAL starting point. Primo insisted that we walk the twenty yards to the pavilion to “begin properly.” (And yes, the little pedant actually said just that.) 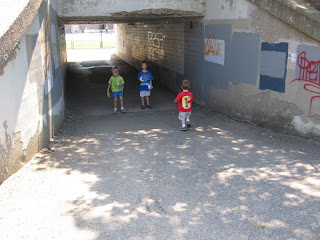 Then, we had to go under the road, via tunnel. A smelly, graffitied tunnel, in which the boys had a very good time screaming for echo effect. 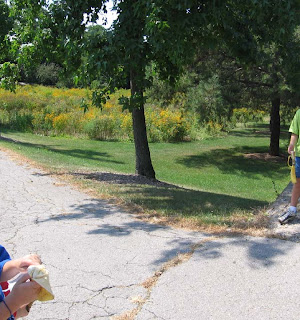 The fork in the road. 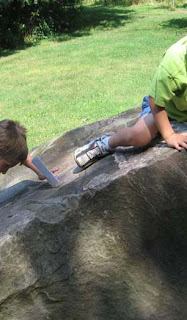 At the big rock, turn left. (I kept saying to myself, because there was no one else there to appreciate my cleverness, “Go that way, really fast...if anything gets in your way, TURN!”) 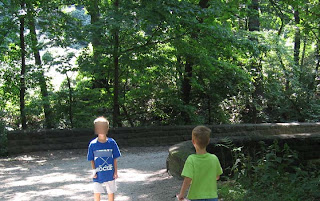 Find the stonework “bridge.” Strangely enough, it sorta was an ACTUAL bridge. No quotemarks needed. Huh. Funny, that. 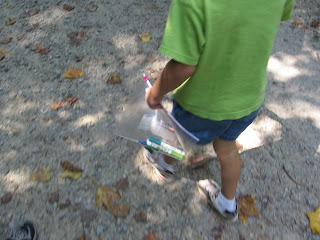 Counting paces. I lost count around 90 somewhere, but I winged it and the boys didn’t seem to notice. Given that they were counting, too. 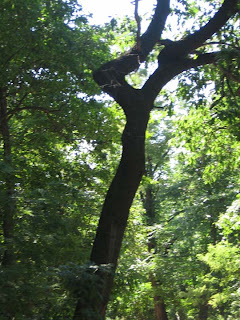 The tree with branches that look like a 4. I was not convinced, but it was the closest we could find, and it turned out to be correct. 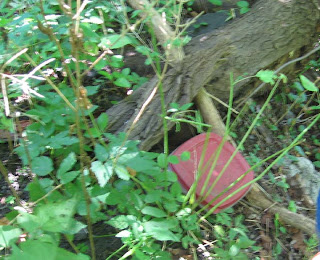 More counting, and a search for a fallen log and a rocky cave. Primo found it, not quite so far as ninety steps, and not quite so rocky OR cavelike as we’d expected. In utter disregard for spiders or snakes, he stuck a skinny hand into the most obvious fallen log and felt around. The rocks were really broken cinderblock, but we coped admirably, as all intrepid explorers do when faced with seemingly insurmountable odds. Or something like that. 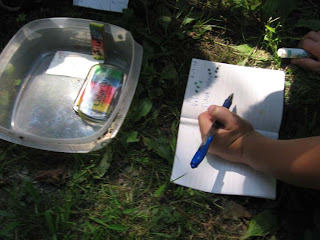 We checked out earlier signatures and stamps, and the boys finally grasped the significance of my insisting on their bringing their new markers, which have little stamps on the ends. I used green footprints, Primo used black spiders, Seg used turquoise squiggles, Terzo used yellow moons – er, yellow suns, and we stamped the bottom with the pad in the Tupperware, for Quarto and good measure. Then we carefully sealed the whole shebang back up and Primo tucked it back into its hiding spot for the next travellers.

I was forced to discourage further exploration into the woods, as the ravine on one side was a fairly steep and densely wooded downhill, and the other side rose precipitously overhead, and I had the baby in the snugli so was unable to follow offroad. Terzo admired a fuzzy white caterpillar, and a cicada shell, and a giant daddy-long-legs. Sadly, much dog poop was sighted and commented upon. The boys insisted on pulling a Shawn Johnson and treading carefully, if not gracefully, atop the stone quote-bridge-unquote, over a gully full of branches and rocks and an eensy little trickling creek.

I spent my suburban eighties childhood running free. My mother pushed us outdoors early every summer morning and we didn’t come back – hell, we weren’t ALLOWED to come back - until it got dark. (I would swear to you that she locked the door behind us but she denied it to her dying day.) We were allowed to ride our bikes as far as we physically could pedal – to the 7-11 for Slurpees, or the corner store for candy and popsicles, or to my friend Stacie’s house to play Atari. We fished in the pond down the road and swam in our little pool in our huge, grassy backyard and built giant cities and intricate buildings in the sandpile. I perfected my sandpie, baked in a carefully constructed giant sand oven and decorated with flowers from my mom’s garden, one long summer when I was eight or so. We built tree forts in the woods at the end of our street and conducted long drawn-out rubberband gun battles from them. In the evenings, while the adults sat on the porches and smoked and talked, we played kick-the-can and Red Rover, Red Rover, and Jailbreak. We were allowed to hide anywhere we liked, except Old Lady Weston’s yard, because she’d sic her dog on you. (Granted, the dog was only a yappy little terrier, but it added an exciting frisson of fear to our night games...) We caught fireflies and climbed trees and played hockey in the street, everyone scrambling for the safety of the curb when a car turned down our cul-de-sac. My mother lamented the lack of grass on the base path we’d worn into her front yard playing wiffleball.

In many ways, my childhood was enchanted. It had fireworks, and trips down the shore, and all the popsicles we could eat. It featured ice cream trucks and endless afternoons playing Barbies in my friend Rosanne’s basement and hot sunny days cheering my All-Star older brother on at the Little League field. I was part of a tribe of children, all running loose and wild and free in the suburban paradise of South Jersey.

And my children? They are growing up in the city. We teach them to ride their bikes and rollerskate and play kickball and hockey in the brick alley. We tramp through the parks and play t-ball at the baseball field and swim in the lovely neighbourhood pool. But they do not, nor will they ever, have the glorious freedom to go where they like, when they like, with whomever they like, all the livelong hot summer days. Their playdates are structured and arranged and, more often than not, chauffeured and chaperoned. Our yard is fenced and I can’t imagine being comfortable with it any other way.

But the boys climb our huge old magnolia tree and I force myself to let them. I let them get stuck and let them yell and let them fall off their bikes or skates, and try to relax. I let them teeter across the stone “bridge” and run ahead around the bend in the path and try to swing themselves across the monkey bars over and over again, without helping, without hovering, without even seemingly paying attention (but I am, oh, I am). Because, in this age of dark panel vans cruising our school zones, and Amber Alerts issued on a daily basis, and entitled drivers disregarding crosswalks and stop signs, my children are having a very different childhood than I had. It is much more structured and sheltered, and while it is still as fun and exciting and unrushed as I can make it, it is not and can’t be the blissfully unfettered, free-range loveliness that my childhood summers were. 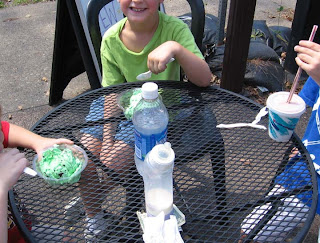 Although we did wrap up our adventure with big bowls of ice cream, as is only right and proper. 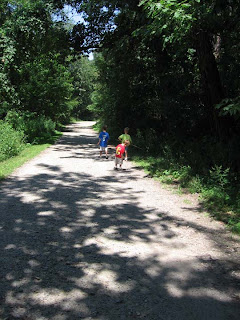 Well done!
They look so little but impress me with their outdoor skills.

Oh, bb, I loved this - you know, the sad bit is that even up here, in this teeny town environment where everyone watches everyone else's kids and the kids are free (r) to go anywhere, they're still not living that life....

Yep. We live smack in the 'burbs but my kids, at ages 12 and 10, aren't yet allowed to cross the busy street behind our house by themselves (because people drive CRAZY on it, yo).

And when my brother and I were MUCH younger than my kids are now, we routinely roamed 2 miles from home, including crossing a HIGHWAY by ourselves.

Makes me wonder if my grandkids are going to spend their entire childhoods locked indoors.

There's a movement (of course) called Free Range Kids which aims to help parents bring back the free(r) childhood we had.

Hey, even if you live in the burbs and the drivers aren't all that crazy, kids don't wander free because they're at enrichment camp or sports camp or sleepaway camp or they're being tutored or at football practice. I tell you, you can't win.

I think you ARE giving them a glorious childhood, and they'll not really know what they're missing, because they haven't experienced free roaming for comparison, so they will grow up with sweet memories to cherish of days and adventures like this.

In two generations, kids will be vacuum packed in suspended animation and released just in time to graduate and get a job.

Trust Joke to always crack me up!

You went geocaching with four kids. I am in awe.

My mom was an ER nurse, so we NEVER had that kind of freedom. I am technically still not allowed to ride my bike on the road.

I'm afraid and nervous all the damned time, but I feel like one of my more important jobs as a mom is to make sure The Boy grows up knowing how to trust in his own independence. It's hard for me to find the balance between the tendency to overprotect that I learned from my mom with The Boy's confidence in his own capabilities.

Thank GOD for cell phones. And thank God I have more than four years until he can get a driver's license, because I don't know how I will cope with that.

Oh, and as far as Better Off Dead quotes: "All right! Now TURN!"

OMG...geocaching. It's even got a name.

I just found last night, a picture of an 11 year old me on my bike (a Raleigh Chopper because I was a badass) and a BB gun slung on my shoulder, with me and all my friends similarly arrayed.

P.S. This argument is one I have ALL.THE.DAMN.TIME with my wife.

technically, geocaching requires a GPS, which we do not own.

just so you know...so it's not nearly so impressive : )

I have considered GPS CHIPS in the children, though. (KIDDING!!)

Babelbabe - It's STILL impressive. I won't even take two kids to the grocery store.

We have our first letterboxing trip planned for 2 weeks from today. Kinda scanty picks around here, but we may invent some of our own!
I was never allowed to be a free range kid. My mother didn't want us out of her sight, ever. But we did spend alot more time outdoors.
And GPS chips in kids are the beginning of 1984. No thanks.

From another Jersey Girl...

I had the same childhood - my mom swore Clinton Avenue was akin to Oz - we'd always be running in or out of the house on the way to Clinton Ave (lots of our friends lived there.) Summers were on Long Beach Island - and we did all the same things only we also played Ghost in the Graveyard with 15 or so cousins every weekend.