"I will myself go find some herbs for you That will be good for health and pecker too." - "The Nun's Priest's Tale" - Chaucer 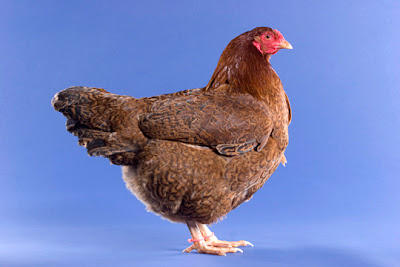 How cute is this little chickie?
It’s a Chantecler (Yes, I am a dork, I like the literary reference), and they lay 4 eggs a week. That’s pretty good laying, especially if you had two or three. They are not broody, meaning they are not physiologically disposed to sit on eggs or hatch chicks. They’re relatively rare, but you can get them from a couple different hatcheries. They are expensive, at four bucks a chick. 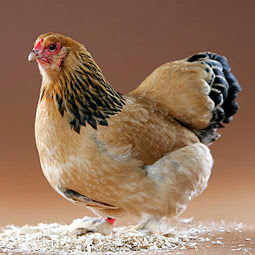 This is a Buff Brahma bantam (bantams might be preferable for city chickens, as they tend to be smaller). They will indeed sit on eggs to hatch chicks, and they lay about three eggs a week. I love their color, and I like that they’re not crested. Crests sort of squick me out a bit. They run about 3-4 dollars a chick. 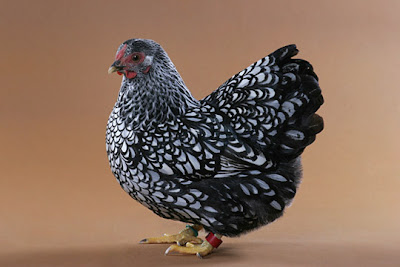 The Wyandottes are really pretty and plump too, don’t you think? This is a silver-laced Wyandotte (they come in gold- and blue-laced also). This breed lays about four eggs a week; they are apparently pretty darn laid-back, too. The hens run about $2.20 a chick. 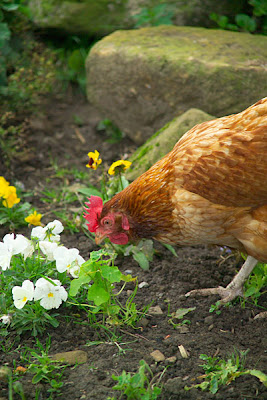 I really adore the Rhode Island Reds and Whites (this one is a hen; the males are almost black). I don't even mind the crests. They will lay a whopping five eggs per week, and are very rigorous and sturdy. The New Hampshire Reds, equally attractive, are derived from this breed, but they only average three eggs a week. The Rhode Islands are about 2 dollars a chick; the New Hampshires are about the same.

You can pick out the breed that would best fit your lifestyle and backyard, right here:
Chicken Breed Selector.

Did you know that it is legal to keep chickens within the city of Pittsburgh limits?

I just dare anyone to complain about chicken noise (there’d be no roosters, so no crowing) when cars routinely drive down this street with radios so loud as to make my windows rattle.

Posted by BabelBabe at 5:32 PM

Email ThisBlogThis!Share to TwitterShare to FacebookShare to Pinterest
Labels: Animal Vegetable Miracle, Instances of the Number 3

Are you getting some?

If I didn't have dogs I'd have chickens.

It's hard to raise them here. My parents tried it a few years ago. The coyotes, bobcats and snakes got them all.

(When I hear Chanticleer, I think of The Book of the Dun Cow. Although I think in that one it's actually spelled Chauntecleer.)

Oh...don't remind me of chickens! My neighbor raises them (we are in a aubdivision) and he had several roosters. Very annoying in the early morning hours.

gosh, I've read disgusting things about raising chickens, though I AM one of Schmutzie's roosters.

I would be so excited - and jealous - if you got chickens. We are a one-pet household courtesy of the dog.

I made mention, a few weeks back, of getting some hens. TCBIM looked at me like I had three heads and said "No way."

But I still want some. That Wyandotte is lovely, but I'd get a Chanticleer just for the name. And the eggs.

I'm glad to read you are on the "chicken hunt". We will have to compare notes. We are currently trying to choose the best sort of hen house - moveable/non-moveable - and then onto breeds.

Hello, I'm peeking out from under the giant scary godbotherer's comment. Which is quite fitting as I've watched 2 documentaries about American evangelicalism this week and I must say I'm now rather frightened of you Americans. Anyway, that will teach you to put priest and nun in your post title dear!

I was going to say when I hear Chanticleer I think of the children's book Pricketty Pracketty, in which the handsome rooster is called Chanticleer.

I knew where this was going--I had a "did you know it's legal to raise chickens in the city" conversation just last week.

I think the Wyandottes are the cutest.

P.S. Ovah heah the only people who raise chickens tend to use them for, er, religious ceremonies, from which the chickens invariably fail to emerge intact.

you should get a silkie bantam! They look like small lap dogs... but with eggs!

Of course Chanticleer and the Fox! I've never raised chickens myself, but I know plenty of folks who do (including every single child in my Sunday school class last year) and most of them in city limits. Portland allows up to 3 chickens, no roosters. Seems quite sensible to me. We just got a line on fresh eggs from my roommate's coworker out in wine country, and we have a lovely multi-colored box in the fridge now.

Oy, something else to nurture...And some backyard murder and mayhem will happen - chickens attract predators.
But they make most excellent food scrap recyclers - they will even eat cooked chicken! and you'll always have fertilizer; um, are you really thinking about raising chickens?!

We have a couple coyotes in the woods behind the house, so I don't think they would last very long. Plus, I can barely keep a plant alive, much less pets. It's amazing my children have survived this long...

I want chickens so badly but they aren't allowed here.

Chickens can be an entertaining addition to the family and building your own backyard chicken coop whether it is a portable or permanent fixture can be very satisfying. Check out building chicken coops now to see how satisfying building a chicken coop can be.