"My mother told me to be wary of fauns."

I was all set to go to a movie tonight, one of the very few that have even remotely interested me in the past months. A local public radio station was hosting a members-only showing of “Pan’s Labyrinth” and ever since the first time I saw that...creature...with eyeballs in his palms rather than his head, I knew I wanted to see it. Stephanie Zacharek of Salon liked it very much, and I trust her totally.

I honestly cannot remember the last time I went to a movie theatre to see a real, live, grown-up movie (“Cars” and “Pooh’s Heffalump Movie” while perfectly fine and even entertaining movies, do not count.)

I have heard from several reliable sources that “Labyrinth” is very VERY violent. It’s set in Franco’s Spain, so the violence doesn’t seem very surprising, and its director drew heavily on his fascination with the classic fairy tales, so even less surprising then. I was prepared, even though “The Godfather” is about as much movie violence as I can handle easily. (I may be the only person on the planet who has not seen “Reservoir Dogs,” the Matrix movies, “Kill Bill,” or “Pulp Fiction” and that is why.) (I haven’t seen “Titanic” either, but that’s just because I am smarter than the average bear…)

But it seems that the radio station was not the only entity handing out passes, and the movie had earned a Golden Globe nomination for Best Foreign Language Film, and even though the radio station had been “guaranteed” enough seats, alas, there were NOT enough seats and my coworker and I did not get in.

We were offered free passes to see anything else playing, as long as we used them tonight.

“The Painted Veil” had already begun; I had no interest in “Dreamgirls,” “Rocky Balboa,” or “Blood Diamond” at all; or “Night at the Museum” without my kids; and B had already seen “The Good German.”

We accepted defeat and went and had a beer. If I looked like this, I would've been able to see what beers they had on tap without falling off my barstool... 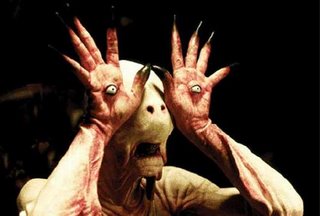 Bugger. Unfair. Can you use it on another night?

As for violence: I've seen the Matrix films (snoozed through the second two) and they're not bad at all, but I walked out of Reservoir Dogs at the torture scene and still have mixed feelings about that "stuck in the middle with you" song...

Quel bummer! I want to see that one, too, but the local arthouse place where I treat myself to movies while the kids are in school isn't showing it early enough in the day.

I also want to see Notes On A Scandal but that one has disappeared from local theaters altogether after like two days. Weird.

I'm sorry that happened, but delighted to hear that you had no interest in Dreamgirls...

it's you and me - against THE WORLD.

That stinks!! I remember seeing that wedding movie with Toni Collette with a YEP pass eons ago.

Night in the Museum is fun!!

and I can't remember why I didn't want to see Dreamgirls, but now that Eddie Murphy won a GG for a semi-dramatic role I'm curious...

I was under the impression that the reviews for Dreamgirls had been lukewarm. Apparently I was wrong?

Anyhow, I'm not the person to give feedback on movies. We only saw one in the theater in 2006.

That is lame that you couldn't get in to see the movie. And WYEP is so good, too. Its too bad "The Holiday" wasn't an option, that one was good, and I think that you would enjoy it. (but beware, it is a chick flick, a clever, good one, but still...)

1- I have heard people, to their own surprise, speaking highly of Dreamgirls.

2- Pulp Fiction is on my short list of favorite movies, ever. The violence is not nearly as jarring as in Reservoir Dogs.

3- I have pretty much given up on watching grownup films in a cinematic venue. I haven't done that since, um, 2004.

Evangeline is on her way to see Labyrinth even as I type. It sounds really good.