Amble on over to Blackbird’s blog post from yesterday and check out her link to The New York Times’ Love Among the Ruins and its accompanying slideshow of “The Beautiful and the Damned.”

The ugly first - we'll get to the good and the bad. Eventually. Maybe.

Nick Nolte looks like a science experiment gone awry – or perhaps the end of the other father in Coraline.

Billy Bob Thornton just squicks me out. Even though I think he's a decent actor. (Which reminds me, I scored a copy of A Simple Plan from the book exchange at work today…)

Does anyone else think Sam Shephard could be Colin Machrie’s older brother? Which is really a shame, as he was very cute when he was younger 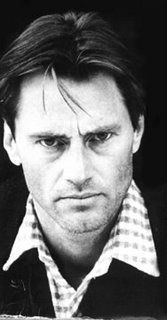 – although after reading Buried Child, you have to wonder if you would want to be alone with him…spooky….

Keith Richards – well, I can’t look at Keith Richards without thinking about the story that he once had all his blood replaced to detox, a la the druggie baby in that episode of ‘ER’ (now THERE’s a delicious man – George Clooney. Oh my God. The Cary Grant of our generation. I thought he was gorgeous when he was Doug Ross, but he’s only improved with age.)

Ed Harris? Never crossed my radar until I saw him in “Stepmom” with Susan Sarandon and I couldn’t figure out which one I thought was sexier. Oh, was Julia Roberts IN that movie? Didn’t notice.

Kris Kristofferson is just cute, and after a certain age, a man should just not be cute.

Jeremy Irons doesn’t do much for me. Besides, he IS Humbert Humbert, so after that, I found it difficult to even consider him as an object of desire. But in the early eighties, he was in “Brideshead Revisited,” with Anthony Andrews. Now, I don’t generally care for blonde men, but for Anthony – and perhaps Kenneth Brannagh – no definitely Kenneth, as Henry V – I would make an exception. (Oh, and also Paul Newman: younger – eh. Older – ooooh.)

We start moving in the right direction with Robert Downey, Jr, although you run the risk of falling into the “I love you so much I’ll fix you” trap. (I once had a man tell me that he thought he could fix me. Um. Didn’t realize I was broken. Stupid, yes – I was with him. But broken?) This predilection for rescue is called the Florence Nightingale Trap in the article. The psychological complexities are beyond my discussion right now. Feel free to discuss amongst yourselves, though.

As for Blackbird’s beloved Hugh Laurie – in this photo at least, I keep expecting him to say, “Hump? What hump?” But really, in the show, it’s the limp that does me in. What exactly is it about a man with a limp? WHY is a limp SEXY? But it IS. I’ll bet Mr Rochester had a limp (among other things – let’s hope his wrecked face looked like the Jeremy Irons/Hugh Laurie ruined and not, please God, for Jane’s sake, the Nick Nolte face.)

You know who else had a limp? Archibald Craven. Right? He had some sort of limp in the stunning Agnieszka Holland film version of The Secret Garden. And didn’t you just LOVE him? I know his nose is big, but those eyes. Those eyes, you could drown in those eyes. Although, I do admit, put any man in a collar, and cravat, and frock coat, and his looks will improve. (Some, like the delectable Colin Firth, just get better and better, until really, most women just can’t stand one second more – and that’s when he whips off his cravat and dives into the pond….what? were you saying something? Was I saying something? Huh? Wha?)

And don’t forget Roger Rees and his “ruined” face.

You may remember him as Kirstie Alley’s husband on Cheers, but he will forever live in my memory as the brave if naïve Nicholas Nickleby in the RSC’s miniseries version. Nickleby was my very first literary crush, and I fell hard. Hard enough to read all 900 pages. Spurred on by the image in my mind's eye of Nicholas righteously pounding on Squeers for beating Smike.

Although now I am veering into merely older, not ruined.

Jeremy Northam as Mr Knightley did NOT have a limp. But he should have. How could Emma marry a hale and hearty man? Wasn’t it required that fresh young women in a certain age had to marry much older men, preferably ones who were not completely healthy? (Emma, Jane, Dorothea Brooke…there must be more…) Just think how bereft the world of great lit would be if Mr Casuabon was not a fussy old invalid type or Mr Rochester not hideously scarred…)

I digress...back to Blackbird’s ruined men. For my point.
Yes, I wrote this entire post to get to this point: Sam Elliott.
Oh my. I can’t even speak when I look at that photo.
I have loved Sam Elliott since I first saw him as Cher’s biker boyfriend in “Mask,” and I love him still. 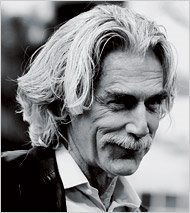 I don’t CARE if he’s old enough to be my father.

Add John Thaw as Inspector Morse? Maybe it's just me . . .

I like the Mark Twain look that Sam Elliott's got going on. It IS Mark Twain that I'm thinking of, yes? I'm not crazy? Off to Google...

I've loved Sam Elliot (who is five years older than my dad) since Mask, too! I'll even stop when ROADHOUSE is on TV, just to get a look at him. Hubba hubba!

Holy Lord, Sam Elliot. I Love him So. And his VOICE?! Oh, even better. I hear his voice in commercials, and I breathe - 'Ah, Sam Elliot. I'll eat beef for you!'

Sam Elliot may be older but he still makes my knees weak. Geez, is he sexy!

I'm clearly out of step here as I have no idea who Sam Elliot is.

But Alan Rickman? Oh, be still my beating heart. Loved him in Truly Madly Deeply (cradling that cello and looking mournful) and adore him as Snape. I hear his voice in my dreams ...

Oooooooooh - I can see Suse and I are going to have to have a throwdown over Alan Rickman! That voice, that palpable melancholy. Tres sexy.