Heavenly Father, we thank you that by water and the Holy Spirit you have bestowed upon this your servant... 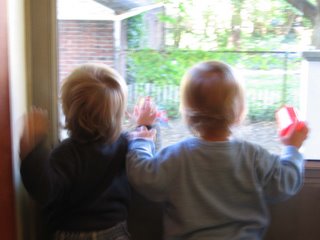 The sky was blue, the sun was shining, the air was positively balmy. It was a lovely Sunday morning, made even lovelier by the presence of loving relatives, friends, and church family.
The older kids got to help – Primo held the baptismal candle, Segundo, in a manner reminiscent of the Great Milk Catastrophe of Last Thursday Morning, splashed the water out of the pitcher and all over the baptismal font; the cousins got to help pour as well, except little Uno, my brother’s child, who was intent upon grinding Cheerios into the church pew cushions and had no attention to spare for church ritual.
Terzo hung in there pretty well, wailed once, quickly, when water was poured upon his head, and mostly just wanted to GET! DOWN! after a bit. So for the remainder of the usual service, he and I wandered in the churchyard, he trying to stuff sweetgum balls in his mouth and me trying to prevent and then extract sweetgum balls from his mouth.
After the service, he was whisked away in his dad’s arms for a whirlwind tour of the parish hall, for admiration by all the little old ladies, and then the family adjourned to the Babe homestead for waffles, sausage, champagne, coffee, fruit, and chocolate cake.
Hosting a soiree for the second Sunday in a row may not have been the smartest idea, but it turned out ok, and the house was mostly clean from last week. I did get around to taking down the Cars Happy Birthday sign, but the black and white streamers were still looped festively about the dining room ceiling. I suppose they should have been blue and white, but you can’t have everything.
Preparations that morning pre-baptism had been going as smoothly could be expected - the two older boys busy upstairs, the two younger boys playing in the living room, Terzo giving Uno a preliminary taste of what it’s like to NOT be the only child anymore. I was premixing waffle batter when I heard Seggie wailing upstairs. As he tends towards unwarranted hysteria these days, I ignored him for a few moments, but finally curiosity – and irritation - got the better of me – and thank God it did. I went upstairs to find him dancing about in the bathroom, splashing in inches of water, crying, “There’s water all over the floor, Mama, there’s water all over the floor!” a fact that was more than readily apparent. I sent him into his room to sit on his bed, while I threw bathmats and towels into the pond in the corner of my bathroom. Then I heard H shout, “What the – there’s water dripping thru the dining room ceiling!”
We have lovely old coved plaster ceilings, and the sheer horror of contemplating the ceiling first falling onto the carefully prepared food sitting on the dining room table, and then the sickening expense of finding and paying someone who could replace and replicate the plaster just about made me puke on the spot.
However, clever H poked several small holes in the ceiling, letting the excess water drain into a bucket – as he pointed out, three little screwdriver holes are much easier to patch than square feet of plaster. And then while I contemplated opening the champagne early and dosing myself up good, H went upstairs to explain to Seg that one does not use an entire roll of toilet paper and then half a box of tissues to wipe one’s bum; one can always call a parent to assist if necessary, and in the future, calling a parent before flushing would be a requirement, at least until Seg was sure about the toilet paper usage rules.
But, all’s well that ends well, and a lovely time was had. I had leftover waffles, but not much else, and the chocolate cake was a nice treat in the late afternoon with coffee for those who lingered, digesting their waffles. I do like to feed people well. The party broke up around five, and then my brother and sister-in-law got moving to get on the road. I was so very sad to see them go; I hadn’t seen Uno since he was a lump of baby, and I so wish – as I often do – that we all lived closer to one another. 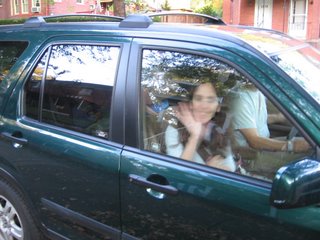 So here’s to Terzo the Episcopalian (as he will henceforth be referred to by all and sundry, or at least by H’s family). Thanks for all your best wishes, and just so you know, the two older boys will be baptized sooner rather than later, as especially Primo has expressed a wish to become Episcopalian himself. (My Baptist forebearers are spinning in their graves but the Catholic grandparents handled the denominational discrepancy with equanimity.)

Brabham Family Chocolate Sheet Cake
- from Michael Lee West’s Consuming Passions: A Food-Obsessed life [which, incidentally, is a fantastic little book and from which I have gotten several wonderful recipes – bb]

Preheat the oven to 350 degrees.
In a big bowl, mix the flour with the sugar.
Boil the 1 cup of water in a large saucepan. Add the butter and cocoa. Mix until the butter melts and the sauce is thick-ish.
Pour over the flour/sugar mixture. Using a large spoon, blend well.
Add the buttermilk, eggs, salt, cinnamon, soda, and vanilla.
Mix.
Pour into a buttered 9x13 pan.
Bake 35 minutes.
Cool 5 minutes and ice the cake in the pan.

In a saucepan, melt the butter. Add the cocoa and blend. Slowly add the milk, whisking. Remove from heat. Add the confectioners’ sugar and beat. The icing will be grainy, almost lumpy. Beat in the vanilla, and the chopped pecans, if using. Spread over the cake. Work fast – the icing dries quickly.

The plain cake looked a little dull to me – I mean, as dull as a chocolate cake iced with chocolate frosting CAN look - so I sprinkled the whole thing with half a bottle of multicolored nonpareils I happened to have lying around (bought in a batch of cake pretties after the Cupcake Debacle of 2006).
And then the cake looked very festive indeed.

H swears that the Two Hands Angel’s Share shiraz he was drinking with it was an even better complement to it than my giant glass of cold milk.

I leave it to you to be the judge.

It all sounds so lovely. I wish you were feeding me. Sigh.
Bummer about the ceiling though. My husband is teaching the boy he only needs to shake if he does a wee (I do NOT agree), so not much toilet paper is wasted in our house. Love the sound of the cake, any recipe where I don't have to cream butter and sugar sounds good to me.

Congrats to little Terzo the Episcopalian!

Oh, crud. Blogger beta fiasco there--I wrote a really cute comment that got swallowed when I signed in. I should have stayed anonymous...

anyways, what I said was:

H's plan for the ceiling was BRILLIANT.

I will henceforth think of Terzo when I see sweet gum balls and am glad his mama is diligent to prevent his eating them.

Hear, hear, for Terzo the Episcopalian!!

(pretty good, for having done that from memory...) (the first time you also got my sputter of laughter from Suse going off to Google what a stick of butter was.)

Suse is right about butter not being in sticks Down Under. They sell it in big blocks, like having 4 sticks all together right away. Thankfully, for those of us vacationing in "self-contained" accomodations, they sell smaller blocks of butter too.

Ah, the overflowing toilet, pretty much unavoidable if you have kids.

1 stick = 113 g. How can you put butter in a tablespoon? I've never been able to figure that one out.

Congrats to Terzo and all!

Lazy Cow just beat me to it on the butter, although I must give credit to Joke for tracking it down the conversion for me!

Ie, one stick of American butter is about half the size of a normal stick of butter in Australia.

And the non-pareils? Did you see a recent episode of the new Dr Who (dishy, dishy man) where he raved about the qualities of human beings who were the only creatures in the universe who made "Edible ball bearings! Brilliant!!" ?

In your situation?
I would think Club Chairs would fit the bill. They are compact, very very comfy and one ottoman could suffice for both, and be used as an extra seat, to boot. All in leather, of course.

If you say "Recliners" I will faint.

ACK - the same thing happened to me, SL, but I control C'd and copied it, then conrol V'd and pasted!

Oh, crap, it copied a reply to blackbird, instead. So much for my 'clever' solution.

Hm, what I said was: Brilliant on the ceiling fix, the cake sounds devine and something mundane about butter.
Oh, and it's great the Terzo's baptismal day was special and full of folk you love.

Don't you just love the way a post about your son's baptism turns into a discussion down here in the commentary nether regions about imperial/metric conversions for butter?

The joy of the internet.

...laughing hysterically. It's fun here at the behind the stove internet café! All the cool cats hang here!

Sweet, sweet babies in the photo up there. I feel like one of those old ladies that just want to kiss all babies on the back of the neck.