We drove to New Jersey last Thursday, leaving Punto with a friend, packing up clothes and diapers and snacks (and juice boxes) for the road, and hostess gifts (a pound of handmade salami from Parma Meats for my brother, and a pound of Enrico lemon-poppyseed biscotti for my SIL, and a book and some cars for my nephew) and my laptop and H’s guitar and my new dress. (Next time we go anywhere, I think we should rent a minivan.)

We made excellent time to NJ, even stopping in Carlisle at the Country Club Diner where my boys inhaled their weight in food and charmed the pants off the waitresses, who plied them with ice cream topped by whipped cream and sprinkles.

NJ was just as hot as PA, but for some reason, it didn’t bother me nearly as much. Perhaps because they only have the one child, their house is not sticky all over like mine, and so that helps.

We took the boys to the playground and taught them how to play Home Run Derby; ordered out burritos, and pizza; drank a whole lot of Amish ale and wine. Chess games were played, and hockey games watched, late into the night.

I lay around a lot in the hammock – look at my view. Ahhhhhh. Lazybones. I also read a lot - mostly I Know This Much is True but also bits of my brother's copy of Slaughterhouse Five. 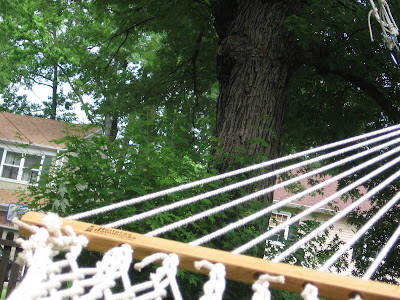 Terzo enjoyed the swing. And Uncle C obligingly pushed him for almost an hour. God bless the patience of uncles. 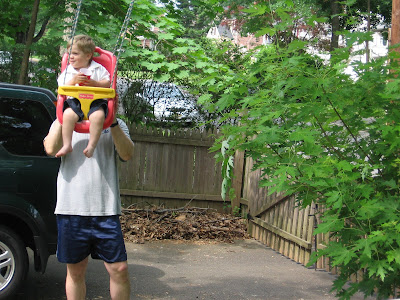 My brothers taught the boys to play Texas Hold’Em.
(When H asked Primo to go get him another beer, I worried that the neighbors would call CYS.) 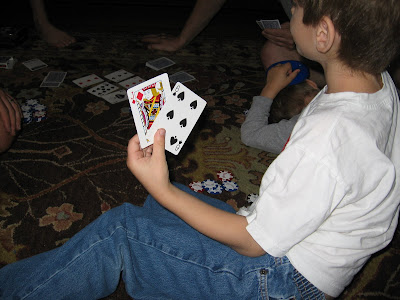 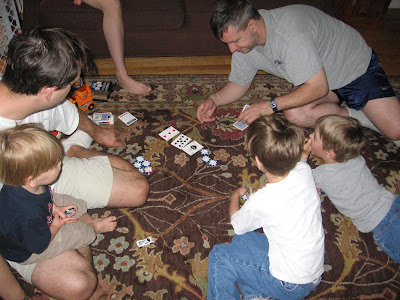 There was a jam session, with frenetic dancing and little children masquerading as whirling dervishes. (We introduced my nephew to the pleasures of both Ralph's World AND Wilco.) 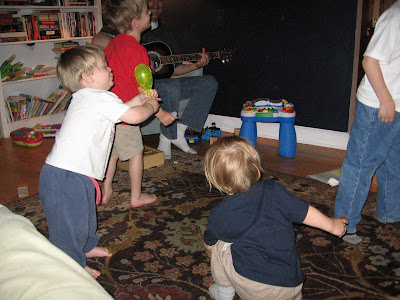 Saturday H and I got up at the crack of dawn and drove to Connecticut. 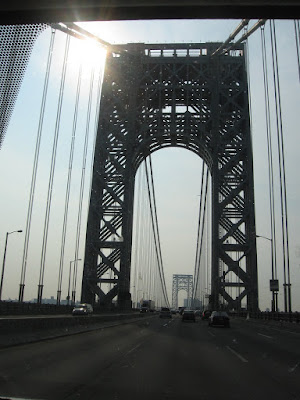 We hit Route 1 early enough to enjoy a leisurely breakfast in a little teeny tiny diner, where we drank pots of coffee and discussed opening a teeny tiny diner of our own in our neighborhood, one of the few things it lacks. I grew up in the Land of Diners, I miss being able to stop in night or day for a fresh cup of coffee, killer breakfasts any time, and consistently excellent pie.

The bat mitzvah service itself was beautiful – very moving and solemn.
E was nervous but still lovely, poised, and practically perfect. I have known her since she was a baby, and she has grown up to be a sweet, smart, gentle, funny, and delightful young woman. I wiped tears away several times; we were all so pleased for and proud of her.

After the Torah portion and the procession and the dressing/undressing of the scroll, and the bit with the bread and wine which was shockingly like Holy Communion, the service wound to its close and we all adjourned to the club for the reception – which I must say, rivaled most wedding receptions I have attended. 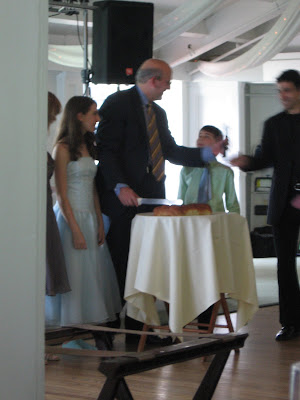 We were greeted at the door with servers bearing trays of drinks. There was a lavish spread of grilled vegetables, cheese, fruit, and crackers. Circulating servers offered scallion-wrapped scallops, coconut shrimp, smoked salmon on black bread, mini avocado-mango-corn tarts, and other nibblies. (It did not occur to me until later to wonder about the presence of so much shellfish; at the time I was merely grateful to eat as much of it as I could hold. There’s nothing like chewing a salty, tender scallop while looking out over the ocean.) 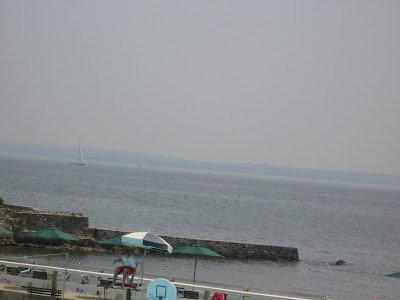 The meal was wonderful – fresh field greens topped with a round of toast and goat cheese; a choice between broiled salmon or beef tenderloin; carrot cake with light, creamy frosting; a tray of delicate, buttery cookies; lots of hot, strong coffee; and an open bar. 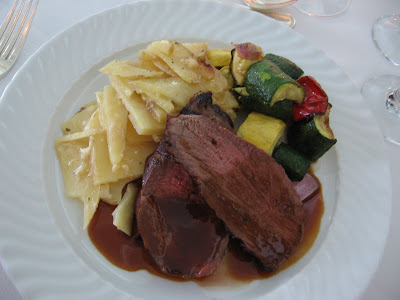 We shared our table with two couples, the male halves of which had worked with A in a previous job, which we didn’t really speak of, as he left the company shortly after two of its directors were killed in the September 11 attacks. (A was meant to be at the early-morning meeting as well, but for some reason wasn't. H and A have been friends since college, and A was best man at our wedding; the thought of any of our lives without his strength, intelligence, and levelheadedness is well nigh unbearable.)

Instead we spoke of children (one of the women had given birth a mere two weeks ago); music, politics, travel (one of the men was from Ireland, and one of the women from Russia); books, vacations, food – we had a wonderful, wonderful time, and H even danced with me, and complimented my dress. Will wonders never cease? (Turns out he was hammered. Does that matter?)

There was a terrific slideshow of E growing up, with three or four slides of her with our boys. (H and I cheered and clapped and overall acted like ancient people, which I suppose technically we were.)

There was a DJ, and some crazy dancing, especially to a song about not liking someone’s girlfriend? I am so glad I have boys. A couple of these thirteen-year-olds had moves that made me blush. 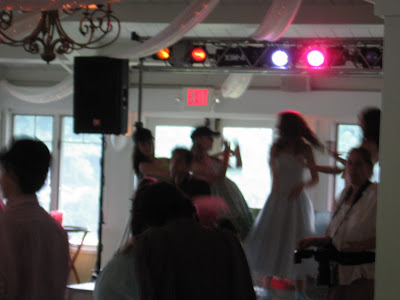 The centerpieces were bowls with fresh flowers – and look, fish! The favors were little bags of gelt, which were embossed with E’s name and the date. (I brought gelt home to my two older boys, my littlest and my nephew got maracas which the DJ was handing out.) 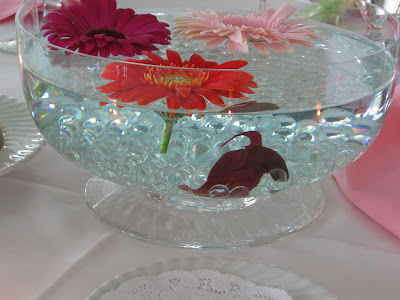 After the party wrapped up and we helped E’s parents gather up presents and leftover cookies and stuff, we all went back to their gorgeous, comfortable home in a little wooded cul-de-sac and sat on the screen porch and talked. Finally H and I drove home at 930, listening to the Stanley Cup finals on the way.

I cannot remember the last time I had such a perfect, beautiful day.

Three years from now, E’s little brother N will become a bar mitzvah! We are already looking forward to the trip. Although, since we were dubbed honorary Jews by E’s dad during the Hakafah, does that mean that next time I can’t eat my weight in scallops?

Email ThisBlogThis!Share to TwitterShare to FacebookShare to Pinterest
Labels: I Know This Much Is True, Slaughterhouse Five

Such a lovely thing, to share such a day with your friends.

You know what they say, In Vino Veritas, I'm sure you looked beautiful in your new dress...

Listen to the compliment, ignore the rest. Do we get to see your dress?

I love reading about perfect days.

Sounds great. I miss diners too. I haven't been to that part of the country...for ages. I'm really glad you had fun--and bonus that you and H had a day by yourselves (well and all the bat mitzvah guests) without the boys! Yay for cousins n'at.

If you rent a minivan, you will want to buy one. Ask me how I know.

My dd's bat mitzvah is coming up this weekend. I hope it's as beautiful as the one you went to.

Sounds like a great trip. Thanks for sharing the pictures!

You're making me hungry. Stop it.

Oh, the girlfriend song. Avril Levigne. My daughter is 12 and plays that song over and over and over and OVER and now I know ALL the words and they WON'T leave my head and it's driving me CRAZY. Hey, hey, you, you, I don't like your girlfriend....