"I should like to know what's the difference between a little pig and a little girl that wanted it Christmas every day!"

Who says that spending has to stop with Christmas?

Yesterday was orthodox Christmas which I grew up celebrating, and I continue the tradition with my children, even though THEY are only a quarter Ukrainian. So, one last present for everyone. I always loved celebrating this holiday because it eased us out of the holiday season. We received one small present from my mom, and she cooked a traditional Ukrainian meal – although I confess we did not eat halupchi last night, but steak salad. Then the tree came down, the decorations were put away, and life returned to normal. Or as normal as it gets around here.

Friday I went to Famous Footwear, to buy new running shoes, desperately needed even before my New Year’s resolution not to be such a lump. I am usually an Adidas girl, but the only Adidas they had were all leather and I like the mesh ones as (TMI!) my feet sweat a lot. So I bought these, they’re size 10 so probably half a size too big, and they are not Adidas, they are New Balance: 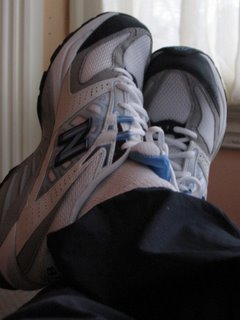 I took ‘em out for a spin on Saturday and I think they’re going to be just fine, once worked into the running shoe rotation (don’t ask).

Terzo was with me and he helpfully pointed out (by yanking off the shelf the entire column of boxes) these snazzy leather boots, on sale for less than half-price: 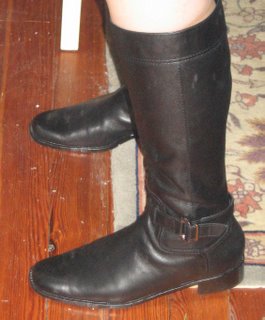 I have heeled boots, and I have snow boots, but pretty, flat boots that I can wear to work, no. But I do now. 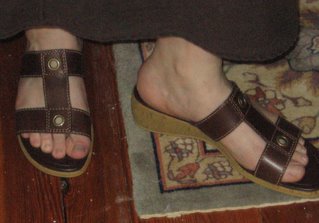 Gosh, I dislike feet. (So I will show you mine! Sorry.)

So – all done spending. Time for ascetic living, and commercial restraint.

Except I had not finished shopping for my nephew yet, and Terzo and I spent a lovely morning in B&N this morning.

For my eighteen-month-old nephew, I selected Richard Scarry’s Bedtime Stories, which is only fair as I claimed early all of our jointly-owned Scarry books, and a board book of The Monster at the End of the Book. (It was a toss-up between this and Jamberry and I ultimately picked Monster purely because it was four dollars, not eight.)

For my sister-in-law, I followed the established tradition of giving her a book I had read and loved during the past year. She receives Broken for You and a little black lined moleskine journal which, frankly, I wanted for myself.

For my little brother, I picked up The Confederate in the Attic, he’s a Civil War buff and this looked funny and unusual and not like something he would pick up for himself even if he’d have fun reading it.

For me, a new plain journal. 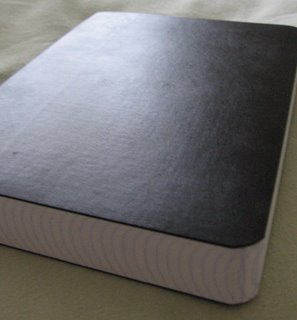 My last one was bought off the clearance table and had a quote from the Desiderata on it. I wanted the plainest one I could find this time around. Unfortunately when I got home I found it was quad-lined, not regularly lined, so it will have to be exchanged.

Bath & Body Works sells this wonderful lemon-verbena perfume I love and wear almost every day; H got me a big bottle for Christmas - only it wasn’t the perfume, it was body splash. I went to the store with the intention of exchanging it only to discover that they are discontinuing the perfume. Of course. (These are the same people who discontinued the single best lip balm I have ever found. In fact, I seem to be the Kiss of Death in these matters. History is full of products which have been repackaged, reformulated, or just plain discontinued the minute I discovered them. Probably wise to never go cosmetics shopping with me.) 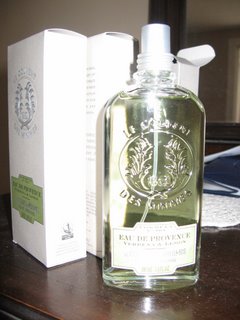 So I did what any normal woman would do: I bought the last three bottles of perfume they had in the store.

So NOW I am done spending money.

Well, except for the DVD of “Love Actually” I just ordered.
And the two hundred dollars worth of groceries I bought.

I think I am going to have to send the children out to work.

I often use that line when I've gone to the store for ONE THING and come out with fifty.

and they'd look even better at blogher this summer....

They are still selling the perfume at www.bathandbodyworks.com.

Sometimes, ebay is a good place to look for your favorite cosmetics that have been discontinued (and sometimes not).

Bath & Body Works has discontinued everything I have ever loved, which is why I no longer shop there.

I LOVE those boots. Also, your feet look great. My feet are gross beyond gross.

Ooooh, a shoe post! I, of course, love feet, I mean, I would have to since my blog is named pink sneakers...Terzo has great taste in boots. The boy will be in an arranged marriage situation by five at this rate...(I mean, that he's so cute and all...)Am I rambling?

Ohhh I LOVE that journal - I have owned two... but if you don't like the graph paper then sad day, I guess you should return it... But those journals last forEVER (well OK I had mine for 2.5 years - which is LONG). :o)

I love those boots.