"May his soul and the souls of all the departed, through the mercy of God, rest in peace. Amen."*

What has been dubbed "The Stanton Heights Tragedy" has been on my mind so much these past few days. New details emerge - horrifically, the 911 dispatcher neglected to mention the suspect had weapons in the house. (Yesterday there was another incident about 6 blocks from me involving a home invasion and the Pittsburgh police and the SWAT team. The poor guys can't catch a break, but I am also telling you criminals out there, now is NOT a good time to be shooting at a police officer in this town.)

All three of the officers were from our neighborhood's zone. It's distinctly possible that one or any of these men responded to my or my neighbors' calls when our vehicles were broken into, or we smelled gas, or someone stole our trashcans (don't ask).

I am doing all I can - holding them in my thoughts and prayers, donating what I can to the families. A friend and I took a cake and some muffins up to the police station yesterday - you know me, my knee-jerk response to just about anything is to bake, and who could use comfort food right now more than the colleagues of the slain officers, who are themselves also always in danger? 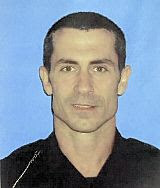 "To protect and serve."
These men could not have done a finer job. Thank you, and may you rest in peace.

The situation is so tragic and sad. It seems like the last few days have been full of crazy, random shootings all over the country. Or people killing their children to make their spouse mad (WTF?). Or young kids reported missing and then found murdered. I don't even want to turn on the news anymore. I don't know if it's just a bunch of terrible things all randomly happening at once, or some sort of darker new trend due to who knows what...bad economy? Job losses? General depression in the population?

I am ready for some happy news.

I think this is why we got pure white snow today...to give us Pghers something else to think about, if only for a moment.

Thanks for the nice write up, hon.

Comfort food is always a nice thing. I am sure the guys appreciated your thoughts.

it's so sad. it makes you realize how cops and firefighters put their lives at risk every day when they're doing their job, which is to protect others. i think baking is a wonderful knee jerk response, i'm sure the goodies were quite welcome at the police station.