"Parenting forces us to get to know ourselves better than we ever might have imagined we could." *

Monday was my SIXTH day with my family, but my first without another adult to buffer. Or schlep work off to. Or change diapers. And since it was meant to pour all day long (which it did), the thought of spending the day in my house with three hyper children, the damn dog, and probably the TV blaring all day seemed like a very very bad idea. Off to the Children’s Museum we traipsed – my membership had lapsed a few months after Terzo was born but re-upping was simple, thank you, my beloved Visa card.

After slogging through the rain and ditching our sopping jackets (after-after hitting the cash machine, because you know, contrary to my children’s firm belief, I do NOT either grow money on trees in my backyard or mint it in the basement), we started as usual in the Mr Rogers area. Better than a Valium, that Mr Rogers, how I love him. Even at almost-seven, Primo found fun stuff to do, and the two littler boys really dug the trolley, the puppets, and the sweaters (although none of them dressed up in the cardigan sweaters like Primo used to). Terzo was especially enthralled by the player piano. 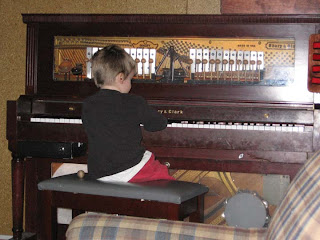 I was busy trying to figure out if this fish was supposed to look like Liberace or if it had some sort of tumor. 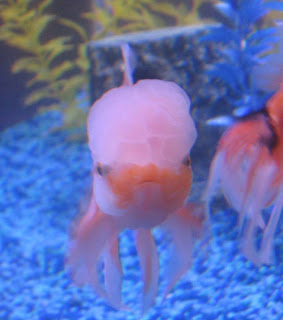 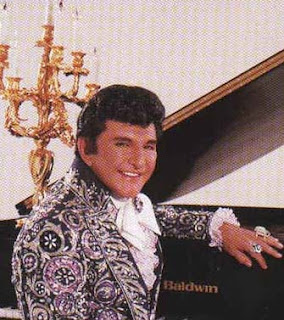 The two older boys were too scared to go in the habitrail until The Baby blazed the way. Possibly because I told them that if they got stuck, tough luck. My seven-month-pregnant belly won’t allow me in further than the first level (sadly, I know this from experience). 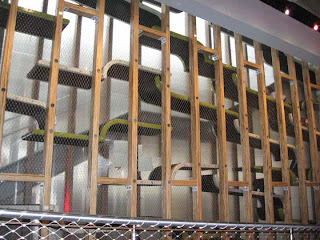 I prefer my children caged, not free-range. (Just the opposite of my chicken.) 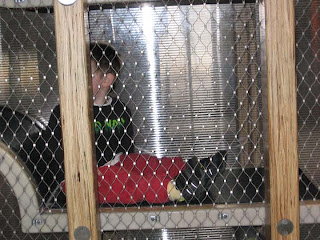 This room is a little weird, there’s lots of supernatural-ly type stuff in it, like a ghost room (reflections of other museum patrons manipulated by mirrors), a skewed sort of dollhouse, portraits whose eyes follow you around the room, and this lovely lady guarding the entrance. 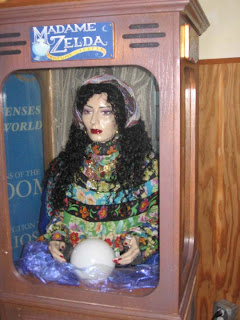 These things always creep me the hell out (remember the one in “Big”? Ick.).

As did this initially.
“Hmmm, Gelfling?” 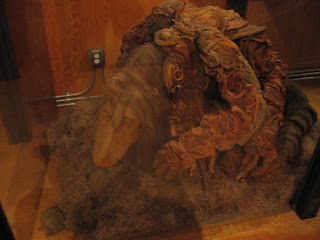 The two older ones discovered a very cool puppet-master sort of video game, and would have stood there all day changing backgrounds, switching puppets, and choreographing dance routines for them, if I would have let them. Unfortunately for them, there were other children at the museum as well (though not nearly as many as I’d feared, what with public and most private schools off for the first day of hunting season. I suppose they were all out in the deluge shooting poor innocent deer instead. VERY educational. If anyone is going to wield a gun in my family, it will be ME. So there.)

Meanwhile, I yearned for some caffeine –some other SMART mother had brought Starbucks in with her (I know, I am pathetic, I was so desperate, I photographed the damn empty cup!). 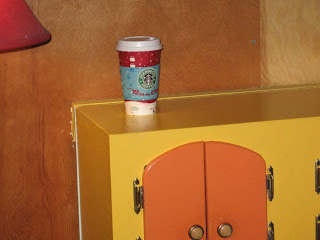 Terzo played with the cabinets while I looked at the book display. I thought this one was titled Jesus Makes Hair Gel (maybe out of wine?), a title that took up way too much of my available brain power for several minutes until I figured it out. 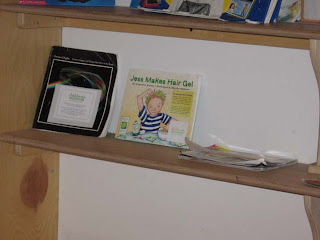 And then Terzo made me follow him into the Gravity Room (worse than a funhouse and less than half the fun) where I promptly became nauseated and had to sit down afterwards. Ugh.

I finally dragged away the boys, kicking and screaming – no, merely whining - from their puppet game, and made them stop long enough to eat some lunch, and then wandered into the physical science-y room.

Although this neato contraption does not always operate exactly as it should, I love the way the wires and cages look. Puts me in mind of Calder, whose mobiles I have always loved. That blue ball is one of Primo’s attempts to navigate the maze. 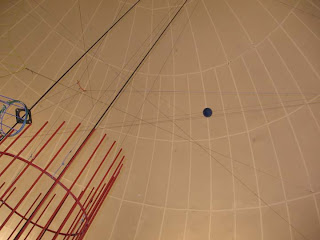 I was thrilled to discover that my children have excellent taste in cars. 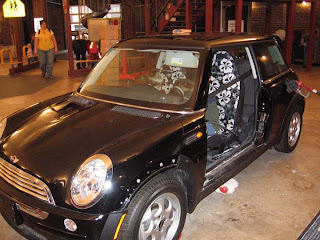 (This is my midlife crisis car – you know, after I ditch the minivan, which we have not even purchased yet. So perhaps I am getting a bit ahead of myself.)


Terzo wanted to climb to the top of the platform to launch parachutes, but the open steelwork seemed to scare him and he wouldn’t stand up. He crawled not only up all the steps but the entire time he was up there, launching parachutes, watching balls, and thinking about trying the spiral slide (he decided against it, I think because he had to stand up to get to it). 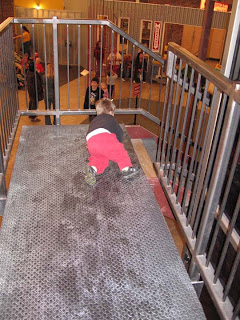 Then he played with this primitive musical instrument for something like half an hour. I thought it was really fun but its noise totally made me have to pee really bad. 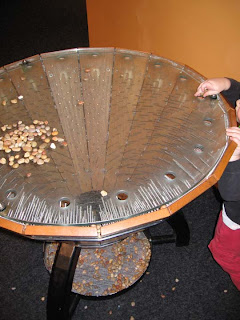 So I sat in front of *my* favorite thing in the museum, legs crossed, while he played. See how the letters fall on the screen, and are stopped by the image of your body? So very cool. I want one in my bedroom. Therapeutic; soporific. But probably more expensive than Zoloft... 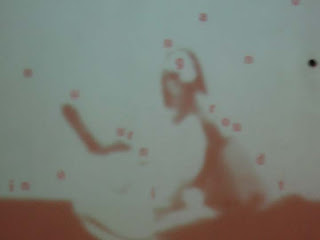 The traveling exhibit was the Zany Circus for Social Change, comprised of circus tricks like tightrope walking, 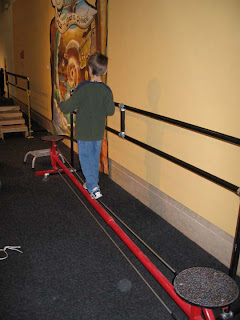 juggling, and stilts (which I really really wanted to try but realized before I made a total ass of my pregnant self how foolhardy that would be). 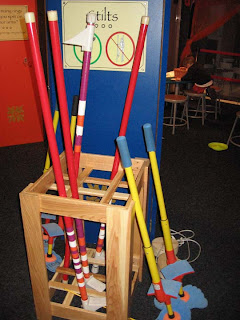 OK, explain to me why, when we have dozens of trains and hundreds of crayons at home, this is still what my children gravitate to when we are out somewhere where there are a dozen other options. Please explain it to me. Because I am at a loss. 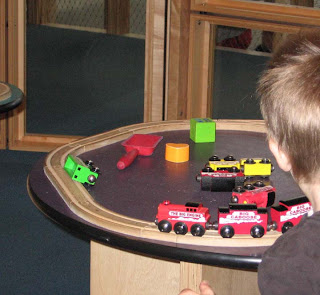 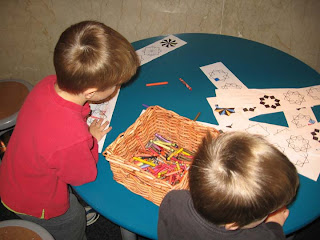 We saved the water room till last, because, bad, unprepared mother I am, I neglected to bring either swimsuits and sandals, or a dry change of clothes. 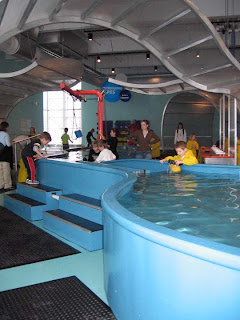 I took photos of stuff that amused me while the three boys built dams, threw rubber fish, and floated sailboats, and got dripping, soaking, sopping wet.

And in Seg’s case, bellowed “Yellow Submarine” at the top of his lungs while plunging the little bath toy in and out and in and out of various pools. 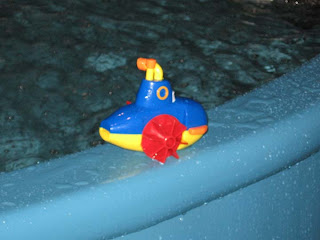 I was both pleased at my child’s very cool taste in music (My guys were also the ones who took the microphone platform in another part of the museum and proceeded to wail “You Shook Me All Night Long” at the top of their lungs while the other children were bleating “Twinkle Twinkle Little Star”), and being embarrassed by how very freaking loud he is. I am still not convinced he is not hard of hearing...

Some of those amusing-to-me photos:

Lots of belly-up creatures of the deep. 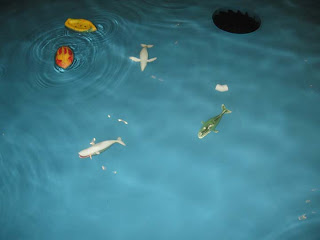 My favorite denizen of the deep, in his natural habitat (a heavily chlorinated pool in a children’s museum). 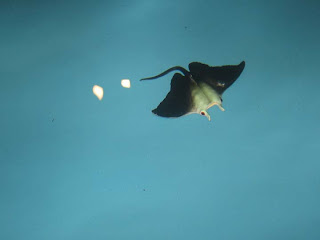 (Never mind that the little guy is plastic…you would need your head examined as well after spending an hour and a half preventing your youngest child from “SIMMING!”) 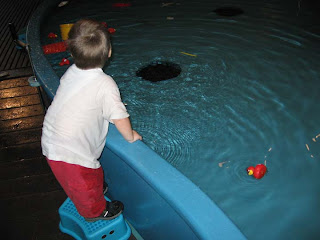 Was I trying to channel Andy Warhol? 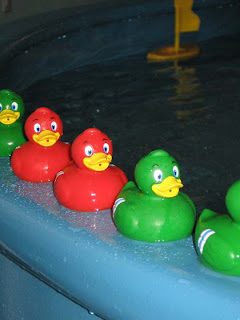 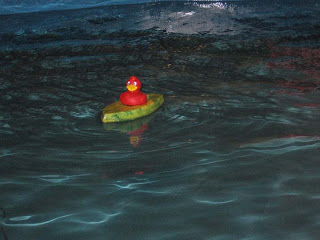 We spent more than an hour in the water room, and I had to drag the kids out, to beat the Steelers traffic home. Granted, I had a mild episode of “You are horrible, ungrateful, whiny children” shouting on the way home when Primo complained that we’d had to leave at all, and Seg cried because I told him he could not have a milkshake when we got home (we’d had ice cream after lunch).

So call CYS. Go on. I’ll happily hand over my museum membership card to anyone else who cares to wrangle the three of them next time, for the entire day, in a public place. But only if you fit in the Habitrail.

Posted by BabelBabe at 8:23 PM

When my kids get whinily ungrateful I just put on headphones.

OMG, your children's museum is like 100,000 times cooler than ours. And now that my kids are "older", there is NOTHING for them at our museum. I guess Michael Dell's money can't buy everything.

And wait, you are SEVEN MONTHS along already? How the hell did that happen?!

I forget that Pittsburgh treats the first day of hunting season as a holiday. What a nice alternative you picked, even if I'm sure you were fantasizing about having a gun at least once during the day.

Slightly horrified that you live in a city that gives you a holiday to celebrate shooting season.

(I live in a city that gives us a holiday for a horse race which is equally weird but not quite as deadly).

Our Children's Museum rocks. The only way it could be any better would be if your membership afforded you a sitter for each kid, so you could dump them for a few hours, find a quiet corner, and read.

One day, there will be peace on earth. One day, the lamb shall lie down with the wolf (but not that way) and the something with the lion. One day all of mankind will be in harmony.

No, on that day, all will be given a day off to watch some horse race and, should one unfortunate colt (or filly, I do not discriminate) falter and irredeemably injure itself along the last furlong, people will be given another day off to put the poor beast out of its misery.

That is what is meant by the brotherhood of man.

I want to live where you do. That is too cool.

Do NOT, under any circumstances, buy a Chrysler mini-van. But it seems I remember you hate Chrysler as much as I do.