We are all meant to shine, as children do. - Marianne Williamson

On the way to graduation. My little Primo marches manfully down the street. He looked so handsome in his white shirt and khakis, with a paper tie he'd painted last week at preschool looped around his neck. 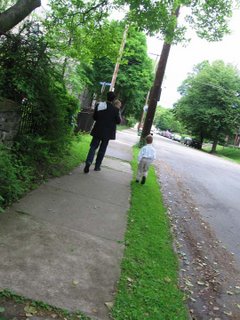 Graduation mayhem. Yes, it was as loud as it looks. And there were multi-generational dealios going on here. Parents and siblings who had attended the preschool were there to watch their children and sisters and brothers graduate. 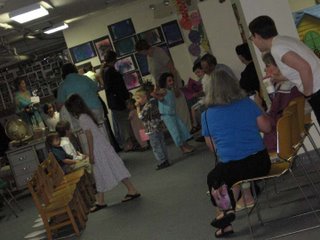 SOME smart people brought coffee for their loved ones. I was not that smart. Or that loved. Note to self: if you are going to be in a room packed full of preschoolers, various siblings, grandparents, and parents for any length of time - coffee in the form of a double-shot latte is most definitely in order. Since even I can't condone vodka at 9am. Although this could soon change with the advent of summer vacation. 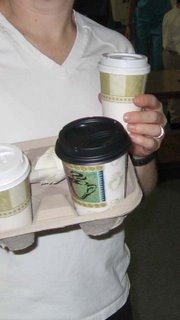 There was singing, and cheerful greetings to the attendees spoken in unison, and funny little speeches by the two teachers. And a play. Note the troll - very un-troll-like, absolutely adorable M - starring in "The Three Billy Goats Gruff." 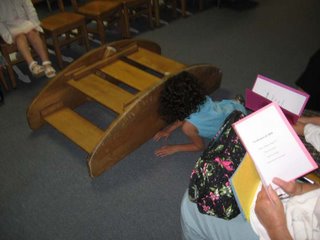 With Primo as the Middle Billy Goat Gruff. When he spoke his lines, saying that the Troll really should wait for his bigger, juicier brother to come along, and eat HIM instead, I noticed that Segundo grew visibly nervous.

The surprise finale was a karaoke rendition of "We Will Rock You," complete with hand-painted guitars. A truly classic moment. "You've got mud on your face, a big disgrace, somebody better put you back in your place..." 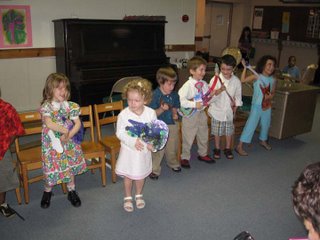 The four graduates got diplomas. They seemed pleased and proud.

They also quickly came up with several alternate uses for the diplomas. Since my diplomas are lying in a box somewhere in my attic, I'd say that this use is actually pretty ...useful. 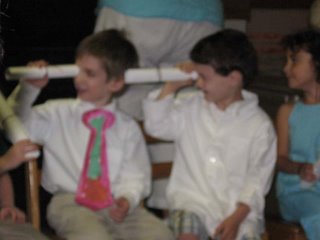 The copious amounts of artwork had to come down off the walls. No one wanted to take the Stic-Tack home. 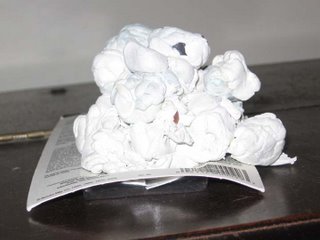 Parents brough cookies and punch and cheese and crackers, for a party afterwards, while we all tried to plan outings over the summer and gathered up the gigantic, nay, did I say COPIOUS?, amounts of artwork.
Terzo wanted DOWN. It was way past his naptime but he was a good sport once I handed him one of my next-door neighbor's to-DIE-for homemade snickerdoodle cookies. 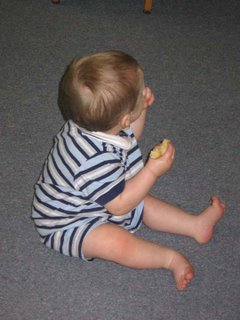 In fact, they were so delectable that he didn't want to waste one. single. crumb. And I took some home and ate them for lunch. 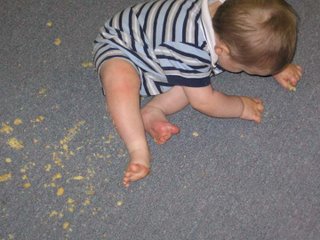 It was a nice little celebration, and I even may have been a little choked up.
But I'll never admit to it.

I'll just blame it on the lack of caffeine.
And the fact that a mere two minutes after the boys got home, they were fighting, and Segundo was jumping on the furniture and crying that he was being teased, and Primo was calling him stupid and poopy and all manner of other pleasant things, and the baby wanted to be changed and fed and put to bed, and H walked out the door to go to work. Where it's peaceful and quiet. And where he will go all summer long. Every day. Leaving me at home with the crazy-making children.

Now, where did I put the vodka?

Cherish the crazy-making for it will pass too soon...

preschool graduation. I just don't know what to say.

Look at all the hair on that baby! And of course you got teary-eyed; it was tender.
We play the Billy Goats Gruff with a book with finger puppets! Wonderful stuff. Perfect for a graduation. I'm glad they picked a girl for the troll. Otherwise, it would be 3 boys/1 girl - not fair!

I didn't have nearly enough coffee for our un-graduation last Thursday. Montessori graduates Kindergartners, not the Pre-K's. So we only had 5 actual graduates, too.

Do you have any camps planned for your Big Boys? Or high school or college kids for babysitting?

I love that first picture.

We'll bake cakes. I promise. And I'll bring you coffee.

That tie is wonderful!

so primo goes to kindergarten in the fall and segundo goes to pre-school...leaving you home with just the baby, right? i mean i realize it's not going to be all day, every day, but i'm willing to secretly bet you a beer that you get a little wistful come september...

me too on the shoes and the snickerdoodles. Plus, WHAT A COOL TIE!

That is a fantastic tie - makes him look very sharp and put together :)
You graduate from preschool in the US? Wow!
School holidays must be pretty tiresome after a while ... umm, that fate is staring me in the face pretty soon.

My son was invited to take part in graduation festivities even though he goes back next year.

And it would have been outside.

We skipped his, but yours looks like it was lovely.

I can only second Surfing Free ... you have a graduation ceremony for preschool?? Golly and all that.

I know, the whole preschool grad thing is silly. And I always swore I would not participate and extend such craziness. but when it's your child, and they want to do it...it WAS just the normal preschool time, in the morning, on the last day of school. And it was a chance to show off what they've been doing and learning. and then we had punch and cookies. low-key. thank god.

What the hell happened to Lady Fun and Happiness? We are forsaken. (Very much a non sequitor, I know, sorry, but it had to be said.)

Thanks for the photos. I think you were very brave (even if your very own Primo was one of the highlights).

The tie AND the shoes both rock.

I'm so happy you stopped by my blog -- it's so wonderful to find another Trixie Belden fan in the blogsphere.