"You must move forward." 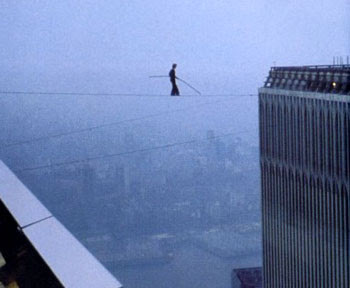 One of the lovely things about vacation is that I can catch up on my reading. I have been slowly working my way through Colum McCann's Let the Great World Spin, and, as it is a book that deserves to have time taken with it, it's been slow going. But I lost myself in it the first two days of vacation.
I re-emerged slowly, stunned, dazzled.

While Philippe Petit's walk on a cable strung between the two towers of the World trade Center is the thread running through the book, it is balanced perfectly, like Petit, with the intertwining stories of half a dozen inhabitants of New York City on that hot, muggy day in August 1974.

Additionally, this novel is a love song to New York, and in a strange, roundabout way, a love song to the Towers. McCann writes a postscript about his father-in-law's trip down 57 flights to escape the south tower on September 11, 2001, and this, juxtaposed after the dreamy novel detailing Petit's incredible act of beauty and the ordinary lives touched however delicately by it, choked me up.

"Let the great world spin for ever down the ringing grooves of change."

Even your short post about it choked me up.