“And now this pale swan in her watery nest Begins the sad dirge of her certain ending.”

It’s been a week. I’m sorry.
I have been a little preoccupied with skiing in the most glorious conditions ever seen on an East Coast mountain.
H took me away for a long weekend – ostensibly for our 15-year anniversary but in reality because I may have been This. Close. to a nervous breakdown if I didn’t get out of the house and away from my children for longer than 2 hours.

I know you’d be happy to hear that I read and read and read, curled up by a roaring fire and sipping whiskey.
But I didn’t.
Instead I spent the majority of my day whipping down a mountain, snow blowing in my face, mist carried on winds so stiff that they practically held me up. Not that it especially hurt to fall down in THREE FEET of fresh powder (practically unprecedented conditions on the East Coast ski circuit). It was kind of hilarious on Friday watching people who clearly knew how to ski apply the proper amount of pressure on the proper edge of their skis to turn or stop on the packed, granular snow we are used to, and instead just stop dead, skis buried in snow, and fall over…
Sunday the mountain was engulfed in fog. I couldn’t see more than twenty feet in front of me, but I still managed to ski for four hours.

H got on skis for the third time in his life; he took a lesson this time, and spent several mostly pleasant hours skiing on Saturday with me.

Every day, I skied all day, met up with H for a swim and a hot tub (probably the germs from the petri dish of a hot tub are what caused this lovely croupy cough I am currently enjoying), and a dinner fit for a longshoreman, accompanied by many cocktails. I fell asleep often before my head even hit the pillow – no reading or knitting accomplished. But the skiing was invigorating and glorious and joyful.

However, I did bury my nose in Elizabeth Kostova’s The Swan Thieves last night. I HAD to finish it. I HAD to find out what happened, and how the mystery unravels. I am one of those people who loved The Historian - you either loved or hated that book, there seems to be no in-between – and I think The Swan Thieves is even better. Kostova tells the story of painter Robert Oliver’s obsession with a long-dead female Impressionist painter from several points of view, using his psychiatrist’s investigation as the instrument. I can only compare the way I felt about Kostova’s characters to the way I felt about AS Byatt’s Christabel Lamotte and Randolph Henry Ash – I WANT Beatrice de Clerval to exist. Kostova describes her work in such clear detail that I felt almost as if I could see the paintings in my mind – but I wanted to physically see them, to examine their subjects and brushwork and studies and sketches.

It’s cleaner than The Historian, by which I mean edited more severely, the story is completely engrossing, and the writing is sublime. I never felt that the story was sacrificed for the author’s desire to just write pretty sentences, either: everything she writes is so evocative that I felt it was the only way it could be expressed. Like this line, which delights me in its perfect description: “She ate like a polite wolf, using her knife and fork with grace and putting away an enormous plate of chicken and couscous.” Or this: “I came out onto a stony beach, the slop of water and sea wrack, the bubbling tide, among grey fingers of land.” (Can’t you just SEE that shoreline? Haven’t you BEEN there? I have.)

The plot is somewhat contrived (as was The Historian’s), but I could swallow the coincidence and the jiggling of plot points to make everything fit, because the book’s sum was greater than its parts. 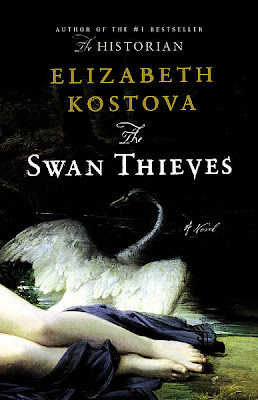 Posted by BabelBabe at 9:52 PM

I am not a skier, and have no desire to be a skier, but there are things in my life that bring me the sort of joy you describe and I did not get to do them much when my children were small SO I am very happy for YOU, that you got to do that. It sounds amazing.

And eesh, I do not know if I want to read this book. I neither loved nor hated The Historian; I found it extremely well-written but too long by several hundred pages and therefore tiresome. And I've been reading about Vlad Tepes since I could read, owing to my great-grandpa growing up in Transylvania (Brasov County), so.... Yeah. Mixed feelings.

Thank you darling. I adored The Historian (read it and then listened to it on audio book some months later) and am going straight to the library site after I type in this word verification (which is PROLE) to put Swan Thieves on hold.

Glad you had such a wonderful time skiing.

Glad you had a great time. I've always been scared to ski! Brave you!

I did not care for The Historian (didn't finish it), but you've made this one sound really tempting...maybe if I ever get through The Children's Book I will attempt it.

Skiing sounded awesome! Glad that you got away.

I've never had any desire to ski, but you sure make it sound like fun.

I've got The Swan Thieves on an inactive hold - just waiting for me to clear a little space on my library shelf so that I don't make other things overdue while I read it. I was just describing The Historian to someone the other night, and now I want to reread that. Sigh.

I am reading The Swan Thieves and I cannot get over how irritating I find Kate. I haven't finished yet and I wonder if there is going to be some plot twist that justifies my intense dislike for this character? I'm on to Mary's part of the story now. I hope she's got a little more backbone.

I loved The Historian.