The trouble with 39 is that it’s the END of something. You’d think 40 would be more traumatic, but as with the end of my twenties, the -9 birthday is the problem. I feel old. I feel old and wrinkled and grey. When you turn 40, you’re BEGINNING something. Even if it’s another decade, it’s a START. Suddenly you’re young again, you’re “only” 40, to the people who are well into their forties already. I know it’s all in the perception – I KNOW this. But I am having a tough time with 39.
Not that I had a tough time with my birthday, mind you. I had a perfectly lovely birthday.

First of all, people, it was sunny and 70 degrees here on Saturday. B.L.I.S.S. Warm enough to wear a skirt and my Tevas, warm enough to open all the windows and blow the winter fug right out of the house.

Secondly, I was permitted to sleep in till eight. EIGHT. That’s bigtime sleeping in round these parts. (This is also how one knows she is entering her fifth decade, and not, say, her third.)

I was greeted first thing in the morning by this guy standing on my front porch. 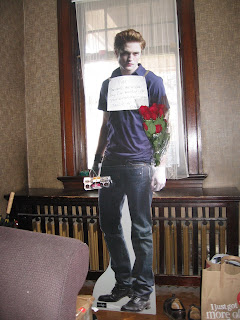 My very sweet friend P dropped him off early in the morning, and he was welcomed warmly and stood up in the front hall. Seg is the only one who views him with complete equanimity; he walks by, pats him fondly, and says, “Hi, Ed!” The rest of us had at least smallish heart attacks at least once that day, and the baby eyes him with great trepidation and refuses to let go of my leg within a ten-foot radius. 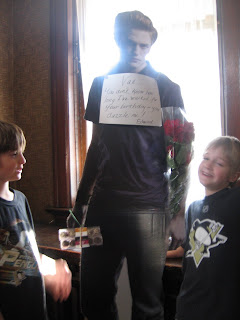 Edward Cullen isn't sure he likes his new adoptive brothers. For one thing, even for humans they don't smell so good, and for another, they're so LOUD. Plus, Edward doesn't GET hockey. 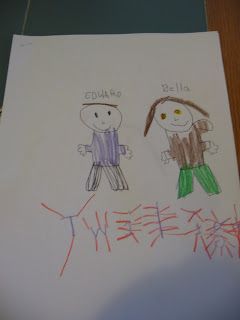 How…odd. Edward is smiling. So is Bella. How very strange. And unlikely.
(Also - the red? He explained, "It's blood." Oh. Kay.)
Inside is – not me and him, as I originally suspected, but me and EDWARD. Oh boy. Perhaps an intervention IS in order. (I told him I’d rather spend eternity with him than Edward, and he beamed.)

The boys had hockey playoffs all day (Team Green lost in the first round. Boo!), and then we went to our favorite diner for burgers and chicken fingers and French fries and milkshakes (the boys) and pie (me and H). THEN we all came home and everybody took a nap (Except the baby and me. Wah! Not fair!)

I was given a ticket to a backyard hockey game between the Winston Animals and the Groveland Stuffers. 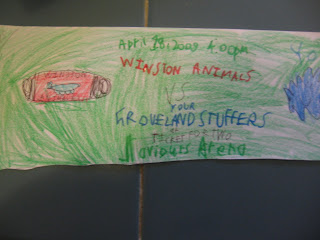 (Now, I am a Schinkadabonketa fan myself, but apparently they got knocked out in the first round also.) (Don’t ask me, Primo made up all the team names a long time ago. I just root for whom I am told to root for.) Once I put my foot down and told the boys I would watch 6-minute periods, NOT 20-minute periods, they broke out the sticks and their stuffed animals and gave me a rousing spectacle of a hockey game. For the record? The Stuffers won, which isn’t surprising since all the biggest stuffed animals play for the Stuffers.

When the mail came, my high school friend J had sent me a copy of my favorite (so far) Georgette Heyer! Do you know how hard it is to find used Georgette Heyers? Almost impossible. But she bid for The Grand Sophy on eBay and won it, and sent it off to me. How sweet is that?!

Round about what would have been dinnertime (but we were all still too full of pie and milkshake to contemplate more food), I opened my “real” gifts: a gift card to Borders, and a gift certificate to the spa, and this volume, which it must have pained my husband greatly to buy: 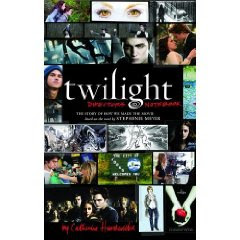 After the boys were in bed, I went to my friend E’s, and we sat on her porch and drank cocktails and ate tortilla chips, and talked for hours in the balmy spring air. It was lovely. (When I got home at midnight, Flat E gave me a heart attack again, and I took His Vampireness upstairs to my sewing room, where my deftness with a quilting needle will impress him wildly and make him desire my blood. Like, um, Sleeping Beauty, or something. Yeah.)

When I thanked H for a wonderful birthday, he looked at me like I was nuts. But it was fun and busy and it’s always nice to find out how many people care about me. I got awesome, thoughtful gifts, and lots of Facebook greetings and emails and phone calls, and I felt very loved.

My mom always said her forties were her best decade; I am looking forward to mine. After all, I have a year of being 39 to get my act together.

Posted by BabelBabe at 2:23 PM

Email ThisBlogThis!Share to TwitterShare to FacebookShare to Pinterest
Labels: The Other Boleyn Girl

Dude! Happy birthday! Or belated birthday! Or ... wait, did I KNOW your birthday was the day after my boy child's? That's not something I would be likely to forget. But then I AM IN MY FORTIES.

Your day sounds absolutely superb, I giggled as I read the post and have come to the conclusion that you have the BEST friends ever. I am also desperate to come over and watch a backyard hockey match with you.

Happy Birthday!
My daughter would call you a Twi-mom! You're lucky you don't have a teenage daughter in the house to torment you about the Jail Bait Eye Candy (as I call Edward)
Looks like you had fun.

Happy Birthday!!! Sorry it's belated I had no idea. You made no mention of it friday at the farmhouse. Sounds like it was a day well spent and that flat Edward Cullen with the roses is priceless. Your 'real' gifts sound pretty wonderful too.

Happy happy birthday my dear BB...you are so damn young I could spit.

I send my best wishes and deepest admiration,

Happy happy birthday! Wonderful people are born on April 18th, you were very wise to pick this date 39 years ago.

Happy Birthday! Your day sounded like a lot of fun. Sleeping in until 8 a.m. IS a luxury--I agree. And I also agree with you about how the end of a decade is harder than the start of a new one. I hated turning 29, but 30 was fun. I will be 35 this year and it seems like a very blah age to be. Stuck in the middle!

I look up to you, now that I know you're my elder.

I was absolutely traumatized by my 39th birthday -- the first time ever or since that I've felt that way about a birthday -- mine was 3 days after yours but I'm a bit older --52.

Sounds like a wonderful birthday. I'm sorry I missed it. Happy belated birthday!