"Will you be responsible for seeing that the child you present is brought up in the Christian life and faith?"* 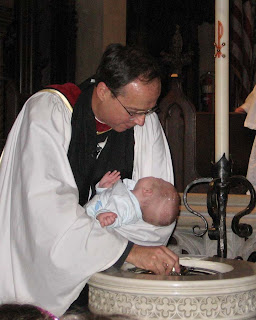 We had the two older boys and the baby baptized Sunday.

Yup, it’s true, we de-heathenized the whole house in one swell foop.

Primo stares at him. “Well…no.”

Um, ok. Having suffered through a childhood of enforced religion, I don’t want my children to require the therapy I did, but I also think the boys officially becoming part of our church is a great idea, not to mention a nice gesture. I was in a quandary; not so H or the rector, both of whom spring into action. H and I know that Primo really just doesn’t want to stand in front of a bunch of people and say ANYTHING; turns out (not surprisingly) that our rector is attuned to this fact. He gently explains what a great thing it would be for Primo to be part of the church, and how much they’d love to have him, and he doesn’t have to say ‘I do,’ he can just say yes. Primo is ok with Yes. So is Seg. Quarto is not given a choice; it’s hard being a baby.

Episcopalians baptize during a normal morning service, meaning we all gathered in the first front pews (all the Catholics looking thoroughly befuddled) and participated in a regular service, which happened to include this Sunday a never-ending processional hymn that started and stopped so often I kept making false starts to the sitting down – I happened to be cradling my infant who may technically only weigh 12 pounds but was like unto a sack of potatoes yesterday morning. Also we endured the LONGEST reading ever, intoned with funereal solemnity at the speed of molasses by a well-preserved older gentleman, and the most somber biddings to prayer I have encountered, recited by an equally well-preserved and noticeably nervous older woman. By the end of these two portions, I was ready to slit my wrists.

The actual baptizing part went smoothly, the kids all behaved and answered correctly (thank heavens). One of the godmothers was worried the rector would ask if she attends church (she does not); I told her that we Episcopalians so don’t care about trivial details like that. Quarto’s godfather kept saying, “What do I do?” and we kept telling him all he had to worry about was renouncing Satan. Everyone did just fine, including – or rather, especially, Quarto who was woken up from his deep sleep by water pouring on his head. I am sure he was all, ‘What the HELL? I HAD a bath this morning, for God’s sake!” but he was genteel enough not to verbalize it – much.

We had planned a pleasant little brunch for the godparents and assorted family after the service. Everyone happily ate and drank (leaving me, however, enough orange spongecake to eat for snacks the rest of the week, thankyouverymuch), and then dispersed to various and sundry paces to watch the Penguins trounce the Flyers.

I? Watched the first period and fell asleep for the next two, in my bed with Quarto snuggled next to me, still smelling faintly of the sweet-smelling oil the rector used to mark him “as Christ’s own forever.”

Posted by BabelBabe at 9:04 PM

Email ThisBlogThis!Share to TwitterShare to FacebookShare to Pinterest
Labels: May Contain Nuts, Octavian Nothing

Cuddling the baby, nothing better. :-)

Congratulations to your freshly de-heathenized family!

Well done. (all at once)

Our kid will be raised Catholic, which I thought was only fair since I never go to church. "Can't they just baptize him during the regular mass?" I asked Mike.

If it got you a nice cuddly nap with a sweet smelling baby, then it was worth it. Congratulations!

The way his head is turned and the way he's holding his hands makes me imagine that he is saying, "The holy water! It buuuuurrns!"

'He was all What the Hell' you crack me up!

By the way, I read Monsters of Templeton on your recommendation and LOVED it.

Congratulations! It sounds like it all went beautifully. We're up next - our 4th is being baptised in July.

There is really nothing like an Episcopal baptism. Congrats to all.

That's FOUR MORE EPISCOPALIANS, so yay for our team! In celebration, I just renounced Satan and all his works. Again.