"A little nonsense now and then is relished by the wisest men."* 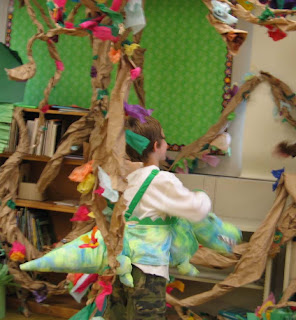 This morning I attended Primo’s Scholar’s program play. (Scholars’ is what the public schools call what WE called TAG (Talented & Gifted). The kids adapted Roald Dahl’s story “The Enormous Crocodile” into a play, and produced and acted in it. They did the set and the costumes and the sound. There were THREE stage managers. Primo had one line (but, oh, what a line it was). No seriously, he had one line but I hadn’t been to the Gifted Center all year, so I was happy to go check out his play. It was fun – the kids were surprisingly good, with mostly perfect comic timing, and such enthusiasm that even had it been boring, I would have still been entranced. And as a bonus, I stopped in at the lost-and-found and reclaimed two of our four missing lunchboxes.

I just finished John O’Farrell’s May Contain Nuts, which succeeded where much satire fails, by being both intelligently subtle and yet so over-the-top as to be hysterical. I can’t wait to get my hands on more of O’Farrell’s work.

Now I am embarked on Jennifer Sey’s so far somewhat formulaic memoir/expose Chalked Up: Inside elite gymnastics' merciless coaching, overzealous parents, eating disorders, & elusive Olympic dreams. Having dreamed of being the next Nadia myself (but being about 6 inches too tall and not particularly blessed with athletic talent), I am pretty into this book anyway; added bonus is that Sey grew up in South Jersey, two towns over from where I grew up, so reading about the places I too frequented is always fun.

I am also reading Laura Lippmann’s first Tess Monaghan novel Baltimore Blues. Lippmann is a mystery writer who has been blipping on my radar for a while, so I figured I’d try a Tess-flavored mystery and one of Lippman’s stand-alones, in this case, Every Secret Thing. When I am in the mood for a good mystery, it’s nice to have a go-to author.

I whipped through Prioleau Alexander’s You Want Fries With That? A white-collar burn-out experiences life at minimum wage. If you are expecting Barbara Ehrenheich-type indignation and enlightenment, this is not the book for you. In fact, Alexander is pretty darn annoying and exhibits some grating writing tics that just about drove me over the edge by the end. Was it necessary to use the phrase “crickets chirping” Every. Single. Time. he wanted to make the point that he was met with silence? Really? EVERY SINGLE TIME? Where the hell was his editor? Hmmmm?

I am having a lot of fun with My Last Supper: 50 Great Chefs & Their Final Meals. Badger, or anyone else with an inexplicable yet ravishing case of the hots for Tony Bourdain, like me, NEEDS to see the photo accompanying his Last Supper. YUM. Tasty. And I don’t mean the supper, as I do not care for roasted bone marrow.

Posted by BabelBabe at 9:07 PM

Email ThisBlogThis!Share to TwitterShare to FacebookShare to Pinterest
Labels: Baltimore Blues, Chalked Up, Octavian Nothing

Hey! I don't have the hots for Bourdain; I just want to take him out and get him stupid drunk and talk about the Ramones.

Now Gordon Ramsay, on the other hand....

I have the hots for Bourdain.

Y'all go on a group date and I'll stay and have the roasted marrow.

P.S. Larding beef with marrow is sublime...you might as well squirt silicone in your arteries, but sublime.

We've been on a "No Reservations" kick around here, taping it during the day and watching it at night. Yum.

Found lunch boxes? That IS a bonus!

I think I've heard good things re: Laura Lippman too.

Tony is my boyfriend; didn't you know? Step off.

Oh my god, I loved May Contain Nuts. I don't often laugh out loud while reading, but that book did it. It's been a while, but I remember a hilarious scene involving a race in a park...?